“Excuse me, how many of you are sleeping under there,” a nasal voice yelled into the cardboard box my mama and me were sleeping in near the LA river. The voice was followed by a flashlight even though it was broad daylight.

It was 1984 and the Olympics were about to go down in LA and the city decided to “count” unhoused people right before they arrested, harassed and forced us out of town. I thought of this both traumatic and idiotic moment when the recent point in time counts of homeless people were released revealing “shocking” statistics like a 43 percent rise in homelessness in Oakland and a 17 percent rise in San Francisco.

“OK, you counted me. Now are you going to give us a home,” my unhoused child self at the time wondered after the lady with the flashlight finished her survey and walked away.

From San Francisco to San Mateo, the grim numbers rolled through corporate and independent media over the last week, “revealing” all the information we poor and unhoused folks already knew. There were a lot more of us.

Will the politricksters and non-profiteers re-build the thousands of units of poor people housing they demolished over the last 30 years under an endless series of bogus acronyms like HOPE VI and RAD? Will rent control legislation be urgently implemented in every California county without the scamlords fighting it with billion dollar campaigns? Will Proposition 10 or other Ellis Act repeals be re-introduced and passed because everyone realizes the emergency we are all in?

Will the Hoarded Mama Earth Report that lists literally thousands of vacant parcels of Mama Earth be listened to, resulting in the buying and un-selling of Mama Earth parcels so they can be used to build self-determined, homeless people-led projects like Homefulness? Will politricksters put a moratorium on evictions and allocate the thousands of miles of vacant indigenous land they have occupied to unhoused people’s use so they can live safely?

Sadly, the history and her-story of genocide tells me that in this stolen indigenous land that values private “property” over humans, that’s built on greed, theft, genocide, scarcity models, krapitalism and white supremacy, instead of any solutions that actually help us, they will pass even more anti-poor people laws that make our existence illegal, they’ll hire more police to arrest, incarcerate and kill us, non-profiteers will get more grant money to “save” us and wealth-hoarders and academics like Marc Benioff will come up with more “great” ideas like spending $30 million to study us.

“There is nothing fun about sleeping in my van. It’s not camping or clamping or whatever; it’s just a slow torture, but it’s all I have and it’s a little better than when I was sleeping on the cement,” said Joe, 46, a houseless RV dweller from San Mateo and RoofLESS Radio reporter for POOR Magazine as he talked about his city’s “ban on sleeping in his car,” leaving him nowhere to go.

While more studies and counts tell us what we already know and as this poverty skola has reported too many times before, the newest “crime” of homelessness is the crime of sleeping while houseless which was recently passed in one of the most progressive cities in occupied Turtle Island aka Berkeley as well as San Mateo and Los Angeles. There is push back from organizers like Berkeley Friends on Wheels and First they Came for the Homeless, whose federal court case challenging Berkeley’s retaliatory belonging theft last year in a landmark case began today, but the hate and profiting off of our backs just increases.

“They came here with SWAT gear and guns and batons,” said a houseless poverty skola from the site of the violent attack by sheriff’s deputies on an encampment of unhoused people in Sacramento.

Two weeks ago after over eight years of lies, demolitions of existent housing and endless false promises by poverty pimps and poltricksters, the mayor of Sacramento and non-profiteer minions took it to a new level of violence against a humble encampment of houseless Sacramento residents who were camped out on a huge empty lot that is the site of a demolished poor people housing development and a trailer park and promised but never manifested new and improved “affordable housing.”

“Thirty-five police cars rolled up, followed by a police helicopter, sheriffs and then a SWAT team, who all swooped down with violence on a small group of us peaceful advocates and unhoused folks. Many of us were hit with batons, and then one of the officers broke the arm of one of the houseless residents,” said Crystal Rose Sanchez, formerly houseless poverty skola and advocate with Sacramento Reckless Charity, Sacramento Homeless Organizing Committee, Sacramento Tenants Union and the Poor People’s Campaign.

Crystal outlined the trail of tears that is common among all these politricksterized cities where public land isn’t really public, where homeless “solutions” just lead to more abuse, and where the non-profiteers continue to profit off our poverty.

“In 2010 when Obama granted $2.5 billion to “solve” homelessness, other states’ homelessness decreased while California’s homelessness increased. Now our mayor, who keeps talking about the “shelter model,” has been appointed as the states homeless commissioner but does nothing to solve homelessness except make it worse,” concluded Crystal.

Crystal reported this horrific story to RoofLESS Radio on PNN-KEXU Po Peoples Revolutionary Radio and while she was reporting this horror, San Francisco RoofLESS Radio reporter Charles Pitts was filing cases in court to resist the lie of the navigation centers – San Francisco’s Big Idea – which are in NO way an answer and yet continue to be all that’s ever put forth and fought for in the Bay.

“I’m so enraged that they continue to talk about building, creating and opening more navigation centers that essentially are unsafe for us homeless folks to even stay in,” Charles said and went on to explain that navigation centers under Bevan Dufty would actually allow an unhoused person to stay in residence until they secured housing for you, but now not only are the navigation centers completely unsafe hygienically and health-wise, they are extreme band-aids, allowing people to sleep for short moments before they spit you back on the street.

“We are starting an army of poor people. It’s a non-violent army to take back the things that were taken from us,” said Cheri Honkala to Po’ Peoples Radio about the pro-active educational and action movement which will launch at the 2019 Democratic National Convention to resist more politricks and lies about our unhoused and poor bodies across this occupied land, which includes the launching of boot camps leading up to the convention, which includes organizing and action tools from poor and houseless peoples from all across the country who are part of the Poor People’s Economic Human Rights Campaign.

In the end it does not matter how many times you count us houseless folks. We are still here, criminalized, swept and stolen from, which is why us poverty skolaz wrote the book “Poverty Scholarship: Poor People-led Theory, Art, Words and Tears Across Mama Earth” and the theatre production which will be on the stage at the historic Redstone Building in San Francisco on Friday, June 7, which actually reveals poor people’s theories, which are not words and studies, but actual solutions us homeless and formerly homeless folks are building, like Homefulness.

And that is why, as houseless and formerly houseless people, we are asking to shift the gaze from us, the unhoused, to you, the housed.

Stop counting us, taking our pictures, using our bodies and struggles as your campaign slogans, our lives as your grant models and research projects and instead stand up, show up, act up and be counted yourselves, stating clearly that until there is housing or liberated indigenous land or redistributed resources like the new Bank of Community Reparations, which is being launched for unhoused, displaced communities and people, you don’t want your unhoused neighbors “swept,” removed, arrested and stolen from.

Show up along with SURJ Bay Area and Democratic Socialists of America-San Francisco and many more conscious folks to Prayer, Presence and Procession of the Housed for the Unhoused at 1 p.m. at San Francisco City Hall and 4 p.m. at Oakland City Hall. For more information or to co-sponsor, email poormag@gmail.com. To reserve tickets to the play, “Poverty Skolaz,” email poormag@gmail.com. Reach Tiny at lisatinygraygarcia.com or on Twitter: @povertyskola. 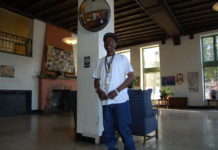 California Hotel is raided by City of Oakland