I have been asked to explain my transformation from captured colonial to that of a freedom fighter and conscious citizen of the Republic of New Afrika – particularly, how it came about in the slave kkkamps of the IDOC – and the struggles of organizing the New Afrikan Independence Movement in Indiana. Even during the high tide of revolutionary activity in the U.S., Indiana has never been known to have a progressive social climate or to produce more than a handful of New Afrikan revolutionary nationalist cadre struggling in our pursuit of land and independence.

During the ‘60s and ‘70s my grandfather, Robert Joyner Sr., was one of the leading revolutionary activists in my city of Terre Haute, Indiana. As vice chairman of his formation, he and his comrades founded the Hyte Center in 1970 (now known as the Booker T. Washington Community Center) to serve as a community liberation center and survival program.

From a very young age, I was taught by my father who my grandfather was and what he did for our people. He made sure I knew the history of our local and national leaders.

When my grandfather fell ill in the mid-‘90s, I can recall going with my father to gather his guns. As he loaded cases of assault rifles, shotguns, handguns, boxes and bags of banana clips and ammunition into the car, I was told they were “left over” from the ‘60s.

I grew up listening to stories of my grandfather having armed confrontations with the KKK when they had come after him for the things he was doing in the community. In 1999 I became a member of a street organization under the teachings of the Honorable Larry Hoover, who focused on an educational, economic, political and social development concept for Growth and Development.

I have been socially and culturally conscious for the majority of my life; however, like many individuals of my generation, I was caught up in the lumpen “criminal” mentality and with no political education or concept of nation or class struggle. My “revolutionary” mentality was based on outdated, backwards “race” politics and a misguided hatred for most white men.

I was captured in 2011 when over three dozen SWAT team, U.S. Marshalls and Indiana State Police surrounded my father’s house with snipers and a battering ram tank. My father was put in handcuffs after confronting the pigs demanding they put their guns down before I would come out.

After a brief standoff, I came out, the house was raided in an illegal search and seizure with no warrant; the only things seized were all the weapons that had belonged to my grandfather. After being questioned about a double homicide of two Euro-Americans, I was illegally held captive for 33 days before being charged with the murders.

The case was never alleged to be gang related, yet the entire case was politicized surrounding my membership in Growth and Development. Every witness statement and deposition became about my affiliation.

Internal Affairs from the Indiana Department of Correction sent prosecutors a Security Threat Group file that was used against me at sentencing. In his closing argument, the prosecutor slapped his own forehead and told the judge, “Your Honor … he basically wrote the rule book on how to be a Gangster Disciple.” This was all on the contrary. Both on the street and behind the wall I was known for getting ones to make the positive transition from Gangster Disciple to Growth and Development.

It wasn’t until 2014 when Comrade Shaka Shakur was sent back to Pendleton Correctional Facility that I was transformed into a New Afrikan revolutionary nationalist. The comrade saw the work I was doing and gave me a copy of Comrade Sanyika Shakur’s book, “Stand Up, Struggle Forward.”

The book changed my life, it changed the way I viewed the world, it made the very existence of being an oppressed Afrikan within this settler state and the struggles we face as a people come into sharp focus. Destroying the plurality of “race,” it introduced me to dialectical materialism and the antagonistic class contradictions hidden by the capitalist social construct of “race” to strip peoples of their nationality, turning them into subjugated neo-colonials.

I was familiar with the Nation of Islam, the Five Percenters/Nation of Gods and Earths, and the Moorish Science Temple of America, but none of them focused on dialectical and historical materialism for a concrete scientific analysis of how to achieve self-determination and national liberation like the Republic of New Afrika. This led to Shaka Shakur and I founding the New Afrikan Liberation Collective (NALC).

As with all attempts to re-build the anti-racist-capitalist-imperialist movement in North Amerikkka, the one to raise prisoners’ consciousness has been an arduous struggle. We lost an entire generation to gangs and drugs, thus tribalism and chemical warfare allowed the pigs to assume and maintain complete control over the kkkamps.

Many of those who were accused of leading the uprisings and military offensives against the state in the late ‘80s and early ‘90s are just now making their way out of solitary confinement. The IDOC has mastered the science of slave psychology, At Pendleton CF there was zero resistance against the captors and I found it nearly impossible to mass organize around pressing issues and repressive policies that affected everyone.

I learned through the teachings of Comrade Ed Mead that when building a prison movement, there are two ways that one can go about the task: mass organizing or individual cadre development. Focusing on the latter, in particular individuals who were already leaders within their group or organization, I began to see success in transforming the kkkamp into what could be a revolutionary university through great study and struggle.

I began speaking and writing about using NALC to create a front to rebuild the NAIM by unifying the leading cadre individuals and organizations within the New Afrikan Nation. This is when Shaka introduced me to the brilliant works of Comrade Jalil Muntaqim, explaining that what I was calling for had already been proposed by Jalil through FROLINAN (Front for the Liberation of the New Afrikan Nation).

After getting my hands on the National Strategy for FROLINAN and the FROLINAN Handbook, I couldn’t believe that this calling hadn’t been formulated into our program for decolonization. For a year and a half, I have been planting seeds to grow FROLINAN, networking with comrades all over the kkkountry, both inside and out of the kkkamps to bring individuals and formations into the front.

It is clear that we need to evolve a unified strategy for direction moving forward if we are serious about re-building to win.

During this same time, April 2017, we launched the Prison Lives Matter (PLM) campaign, a united front for PPs and POWs and their organizations within the prison movement. PLM became the perfect vehicle for us to connect the dots between National Liberation and the prisoner support group IDOC Watch, active throughout the state.

They helped with the first Prison Lives Matter demonstration in August 2017, and when I answered the clarion call from Comrade Jalil Muntaqim to establish the “In the Spirit of Nelson Mandela Campaign,” comrades form IDOC Watch played a fundamental role in helping me organize the demo and bring some of our national leaders from the NAIM and prison movement to this state for a panel discussion.

In building this working relationship, several comrades from IDOC Watch have become staunch supporters of the New Afrikan Independence Movement. They are also assisting Shaka in his current kkkourt battle against the state for the assault against his captors.

My main objective with the prison movement right now is to get outside supporters to view the prison industrial slave complex through a broader lens in order to see its role in colonizing the New Afrikan Nation. At the same time, when we are trying to raise consciousness about the U.S. violating international laws on the treatment of Prisoners of War who were members of a colonized nation fighting for independence, there needs to be an active national liberation struggle from our people in order to gain momentum and international support.

The liberation of these freedom fighters, the future of our nation, and any hope of freeing the land rests upon what we do right now!

The struggle is still for land and independence! Re-Build to Win! 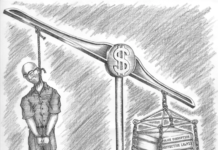