The number of unhoused people dying on the street in San Francisco is triple the number who died last year at this time. During this pandemic Mayor Breed exercised excellent judgment calling for the shelter in place order ahead of other cities and even ahead of Gov. Newsom. She understood the deadly nature of the virus and her responsibility to protect the people of her city.

Yet when it comes to the unhoused people of her city, she is showing callous disregard for their health and wellbeing, defying a unanimous vote by the Board of Supervisors to use 8,000 hotel rooms to get people off the street who want to be housed. To punctuate her draconian stance, she has been ordering sweeps of homeless encampments and the removal of homeless people at the behest of her campaign donors.

As the Poor People’s Campaign Bay Area, we are disgusted with this immoral exercise of political power to serve the rich and attack the poor. We are calling on Mayor Breed to reevaluate her priorities and end her violent attacks on the most vulnerable.

Building on the radical legacy of Dr. Martin Luther King, the new Poor People’s Campaign, A National Call for Moral Revival, was formed in 2018 and launched during 40 days of action during which thousands of people in dozens of states took their housing, healthcare, education and other demands to their statehouses, where many risked and took arrest to demonstrate their willingness to put their bodies on the line to get what they deserved.

In the intervening two years, the Poor People’s Campaign (PPC) held a Moral Action Congress where presidential candidates were questioned about their commitment to call for a public debate on poverty in the run up to the 2020 elections. During that Congress, the Moral Budget was released, which illuminates strategies for funding the demands; and testifiers made the case in a Congressional hearing before the Budget Committee.

On June 20, tens of thousands of people across the country will gather, virtually, to demand that the needs of the more than 140 million people with no and low wealth be prioritized. This event has been in the planning for a year, originally intended to be an in-person Mass Assembly and Moral March on Washington, D.C.

Unable to gather, despite Trump’s admonition to “open up the country,” the campaign is urging people to “Stay in Place, Stay Alive, Organize, Don’t Believe the Lies.” The event will be live streamed on several platforms, including YouTube, Facebook and Twitter, on Saturday, June 20, starting at 7 a.m. PST and be rebroadcast at 3 p.m. PST. MSNBC will also carry the event.

Featuring testifiers from the four corners, the event intends to amplify the stories of people impacted by racism, poverty, environmental devastation, the military economy and the distorted moral narrative that blames poor people for being poor and denies there are enough resources to meet the housing, food, education and health care needs of the half of the population without the means to access a decent standard of living.

We invite you to join this new unsettling force in saying enough is enough. Defund the murderous police. End corporate welfare for military contractors. Address the environmental crisis now. House and feed the people. Healthcare for all. Living wage, protective equipment, safe working conditions for all workers. More info on June 20 and the PPC is at www.poorpeoplescampaign.org. Or write volunteers@poorpeoplescampaign.org.  Together we rise! 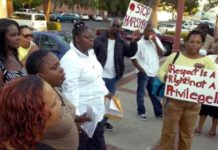