San Francisco – A city ordinance authored by Supervisor John Avalos and passed by a super-majority of the Board of Supervisors on Dec. 14 requiring work for local residents on San Francisco-funded public works and new opportunities for workers in disadvantaged communities went into effect Christmas morning. 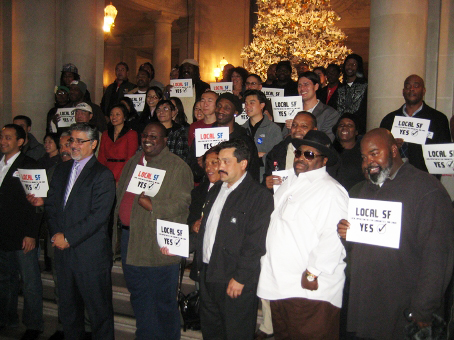 Last Thursday, Mayor Gavin Newsom provided an assist to the law’s enactment by sending the legislation back to the Board of Supervisors unsigned, laying out a set of concerns that he hopes will be resolved as the measure moves forward while signaling his desire for the ordinance to become law at midnight on Dec. 24. City procedure allows the mayor 10 days following board approval to take action on a bill or else it becomes law on the 11th day.

Beginning in February 2011, San Francisco public works contracts will require no less than 20 percent of workers within each construction trade to be city residents and half of all apprentices to be local. The 20 percent figure will increase by 5 percent annually until reaching 50 percent over seven years.

The Avalos local hiring ordinance also requires opportunities for residents of low-income and high-unemployment communities, as well as jobs for workers with a disadvantaged background. According to the San Francisco City Controller, the legislation provides “positive net benefits to the local economy” and will put an additional $270 million into the hands of local workers over the next 10 years.

The measure received widespread support from local out-of-work union members, community advocates in every San Francisco neighborhood, the city’s largest trade unions, contractors both regional and local, social justice organizations and environmentalists. Supervisor Avalos and his legislative aide Raquel Redondiez worked tirelessly over the past year with the community, labor, employers and city departments such as the Office of Economic and Workforce Development, Public Utilities Commission, Redevelopment Agency, Department of Public Works and CityBuild to craft the legislation. National policy advocates such as the Equal Justice Society, Public Advocates and the Greenlining Institute penned letters of support to Mayor Newsom in recent weeks.

The most novel public demonstration of support came last week, however, as Bayview-based jobs organization Aboriginal Blackmen United worked with community advocates Brightline Defense Project and organizers from other neighborhoods such as PODER, Chinese for Affirmative Action and the A. Philip Randolph Institute to circulate holiday cards urging Mayor Newsom to “put the Merry into Christmas and the Happy back into New Year” by signing the local hiring bill. The SF Bay View newspaper and Bay Guardian chronicled last Wednesday’s delivery of two Christmas bags full of 1,000 cards signed by residents from all over San Francisco to the mayor’s office.

“This is the best Christmas that I have enjoyed in many years,” said Espanola Jackson, who is often referred to as the Godmother of Bayview Hunters Point and has worked for decades to end the City’s reliance on “good faith efforts” local hiring in favor of a mandatory approach. “‘Good faith’ didn’t work in the 1960s and it won’t work now,” she added.

“Now begins the task of making this law work as the community intends,” said Brightline executive director Joshua Arce, who worked with Chinese for Affirmative Action to publish the groundbreaking report, “The Failure of Good Faith,” which highlighted San Francisco’s plunge to an all-time low in local hiring performance. “That means union jobs for our local communities, because only opportunities with the wage and working condition protections, pension and benefits that union jobs provide will break the persistent cycles of poverty and unemployment that the Avalos law is intended to address.”

The Avalos law also promotes “reciprocity agreements” between Bay Area cities to help ensure that jobs not performed by San Francisco workers are made available to residents of other cities within the region. A last-minute complaint from neighboring San Mateo County seemed to die down in recent days, as policymakers seemed to finally realize that regional projects in their area such as construction at San Francisco International Airport and on the massive Hetch Hetchy Water System Improvement Project are exempted from the San Francisco ordinance.

Brightline Defense Project is a non-profit civil rights advocacy organization dedicated to protecting and empowering communities. Brightline’s efforts have led to the prevention of a new power plant in Southeast San Francisco and increased employment opportunities for economically disadvantaged residents, particularly in the green jobs sector. Learn more at http://www.brightlinedefense.org/. Executive Director Joshua Arce can be reached at josh@brightlinedefense.org