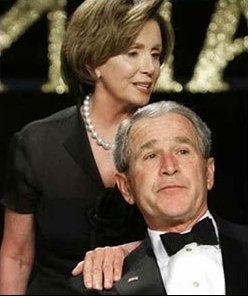 ‘Nancy Pelosi is no friend to this community’ – Minister Christopher Muhammad

Peace mom Cindy Sheehan, who has traveled the world speaking out for peace with justice, spoke to a full house of grassroots activists at the Oct. 2 Bayview Hunters Point Town Hall Meeting about her campaign to replace Nancy Pelosi in the U.S. Congress Nov. 4. She got a rousing introduction – and endorsement – from Minister Christopher Muhammad at the Thursday evening meeting held weekly at Grace Tabernacle Community Church, 1121 Oakdale at Ingalls alongside the Hunters Point Shipyard. The Bay View strongly urges San Francisco readers to elect Cindy Sheehan Nov. 4!

Minister Christopher Muhammad: The community has to now recognize its importance in policy-making decisions and I’m happy that our Congressional candidate is here, and we’re going to hear from the great Cindy Sheehan in a few seconds. She has taken a bold step, a step that I’m sure many people think is not prudent; it’s not something you should do: “You’re going against Nancy Pelosi and, my God, she’s the speaker of the House and you can’t top her.” And that’s exactly what Cindy Sheehan decided to do.

And the fact is that the powerful, wicked rulers govern and manipulate forces and policies for the rich against the real environment of the poor. Nancy Pelosi and other congressional and Senate leaders – they all got together [to consider the $700 billion Wall Street bailout], made back-room deals, and they said we have an agreement. And then they went to cast a vote in Congress – and Congress said “No.”

But now when you’re the speaker of the House, you want to be able to count your votes. You should have support for what you put before the people. But what they didn’t calculate was little people all over this country calling Congresspeople who are up for re-election and telling them in no uncertain terms if you vote for this bill, you’re out of here, buddy.

And so they were shocked and they brought the bill to a vote and the people said “No.” Now you see these folks scrambling to try to salvage something when it was a grab for the rich to be bailed out.

And you think about what they say about welfare mothers: “You’re irresponsible. That $300 a month you’re getting – why, you’re cheating the system.”

How many of you grew up on welfare? I did. We got – well, my mother received – $127 every two weeks. Did you hear what I said? She had five children in Marcus Garvey Housing Project in Los Angeles, raised five babies, and she received $127 every two weeks, on the first and the 15th.

So when you talk now about welfare, it has a poor Latino face, a poor African-American face, a poor Pacific Islander face, a poor white face. But now we learn that welfare has a Wall Street face.

Now we’re bailing these people out, these greedy dogs who literally tricked people into mortgages. People said, “Look, I make $40,000 a year. I can’t afford an $800,000 mortgage.” “Oh no, no, no, we’ve got a program for you: You’ll only pay $800 a month, $1200 a month. And it’ll go up, but don’t worry about that. By then you can always refinance and get a new mortgage. The main thing is just get in while the getting is good.” And they sold people. Now the chickens have come home to roost for the big boys. And more and more people are suffering.

So why don’t we ask our great champion fighter for justice to speak. I’m so proud, and it’s just good to see her. And everybody should know she’s a mother who sent her son off to fight in the war in Iraq because he and she were told that this is about democracy and this is about justice and all those good things.

But when he died, she wanted to know, what did my son die for? And nobody had answers for her, including the commander in chief. So she pitched a tent in front of his house [in Crawford, Texas] and decided to wait on him until he showed up. And she helped start the anti-war movement in this country. So here’s our next Congressperson from this area, Cindy Sheehan. 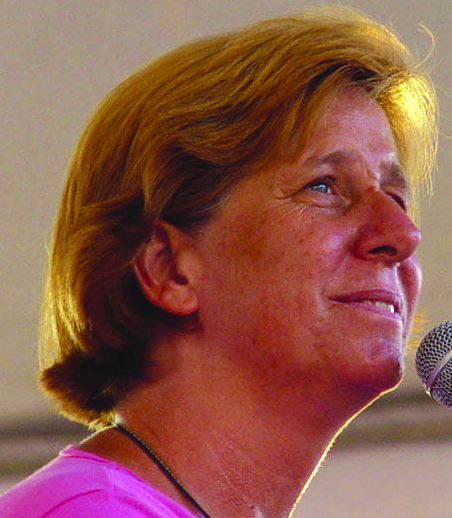 Cindy Sheehan: It sure is hard to follow Minister Muhammad. It’s great to be here again, and I know it’s been a while since I’ve been here. I’ve been busy trying to get on the ballot. We had to get 20,000 signatures just so they could qualify 10,000 because they said [many of the people who signed] weren’t on the rolls.

So I had to check the signatures. People were bringing in [signatures from people in] SROs and people who were living in the street. There was a big red line across their name and they were [deemed] not qualified to sign my petition. But you know what? Those were the people who need me in Congress.

This is a corrupt system. They say it started with George Bush. George Bush didn’t start it. Bill Clinton was the one who reformed welfare. Welfare rolls went way the down in this country, but you know what happened? Poverty went way up.

We cannot solve this economic crisis by putting $700 billion into Wall Street. We need to pump $700 billion into our economy. I don’t like trickle-down economics and how it works; they call it Reaganomics. Now because of trickle-down economics, we are the ones that get trickled on. We don’t reap any benefits. They sustain themselves off our labor. We do the work, we do the labor, we pay taxes and they get richer. And that’s what this is about. 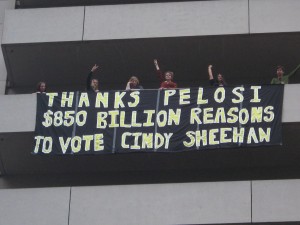 Why don’t they put that much money into education? Because if you have an educated workforce, why would anybody join the military? I was surprised that almost every person running for School Board wants to keep JROTC.

I always ask people, “How many young men do you have who are vulnerable to the military recruiters?” I say, “Think what you’re doing.” And they say, “We need to keep kids in school.” If you can’t come up with a program to keep kids in school, that has nothing to do with the military; that’s a failure of imagination. We don’t need the military to teach discipline or how to obey authority. No, we need to stand up to this authority.

And I want you all in this community to plaster your community with Cindy Sheehan for Congress signs. Because you know Nancy Pelosi is not standing up for you. Nancy Pelosi will not stand up for you. All Nancy Pelosi stands up for is the corporate interests, for Lennar, for the military, for the imperialists. She will stand against you.

But what’s going to happen is more of us will get forced out onto the streets. Our jobs? We’re going to lose our jobs. They’re going to try to force this down our throats: a $700 billion bailout.

The only way we can fight it is to get rid of people like Nancy Pelosi, to support my candidacy because I will support you because I am you. Thank you very much.

We CAN elect Cindy Sheehan to represent US in Congress! Stop by her election headquarters at 1260 Mission St. between Eighth and Ninth in downtown San Francisco, call (415) 621-5027 and visit www.cindyforcongress.org/.

Nancy Pelosi, with 32% approval in San Francisco, is afraid to debate Cindy Sheehan

by the Cindy for Congress campaign

The Cindy Sheehan for Congress campaign has been demanding that Nancy Pelosi debate her opponents in a face to face debate. As of 11 days before the election, her campaign has ignored our requests.

Nancy Pelosi has not held a town hall meeting here in the district since 2006. She is obviously running out the clock on debate like she ran out the clock on impeachment. We feel that it is imperative for her to publicly answer for her record and show some respect for her constituents and the democratic process. We believe that leadership takes the courage to face challenges, not run from them like Nancy Pelosi has.

Recent polls show that 86 percent of people in this district feel “worse off” then they did two years ago and according to a recent California Field Poll, Pelosi has only a 32 percent approval rating here in San Francisco.

Don’t you agree that Pelosi needs to answer for her record on important issues that are compromising our lives and our district? Non-impeachment, constitutional debasement, torture, war, spying, offshore drilling, corporate welfare, economic emergencies, ethics questions, privatization, gentrification, affordable housing, education, mass transit, energy costs etc. are some of the many challenges and crises facing us today.

Please help us get our message out. Please donate. We also need canvassers, phone callers, envelope stuffers, or anything else you can help with. Email Jackson@CindyforCongress.org to volunteer to help.