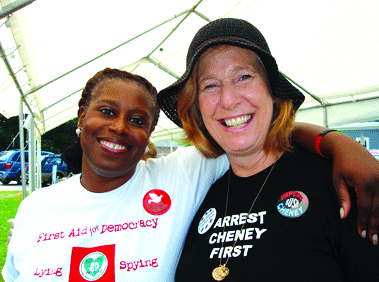 On the morning of Dec. 10, 2008, Cindy Sheehan, Nelson Valdes, Saul Landau and I signed a declaration as the U.S. delegates to an international conference assessing 60 years of the Universal Declaration of Human Rights. The conference is sponsored by the Networks in Defense of Humanity. Here is our declaration:

We celebrate 60 years of failure. Human rights have been converted from a noble goal into an instrument of foreign policy used by rich and powerful nations against the poorest and weakest people of the world.

In 2008, almost 3 billion people throughout the world suffer the most basic privations.

After 60 years of empty human rights rhetoric, we demand that governments focus their attention on fulfilling the promises of 1948. We write this document on the parchment of environment, which everyone shares, warning us all to drastically change the ways in which mass production and consumption take place.

1. The United States is a member of the commonwealth of nations;
2. Benefits accrue to those who cooperate with the global community and view other countries as potential partners for the upliftment of humankind; 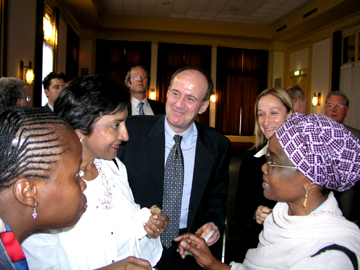 3. Unfortunately, the leadership of the United States government has consistently been a disappointment to those of us who value the tenets and the possibilities for humankind embodied in the Universal Declaration of Human Rights;
4. The Universal Declaration of Human Rights affirms the rights of self-determination, the rights of women and the indigenous, and the rights of association, expression and resistance to protect and preserve these precious rights;
5. Poverty, severe income inequality on one hand and greed and over-consumption by a few on the other hand deny for far too many on the planet universal application of the Universal Declaration;
6. Climate change, unsustainable agriculture, unbridled militarism, terrorism with impunity, nuclear proliferation represent threats to our planet and threats to humankind;
7. The current implosion of the engine of U.S. imperialism and global capitalism contains the seeds of a new global order in which the rights of humankind and the Universal Declaration can find universal application;
8. The incoming Barack Obama administration has a unique opportunity to make a clean break with the policies of the past, including installation of dictatorships, campaigns of invasion, terror and slander, torture and occupation and can build bridges of peace and justice with dignity and respect to Africa, Latin America and Europe;
9. Therefore, we call on the president-elect to put the United States on a clear course of global fraternity by
a) invoking the Universal Declaration of Human Rights,
b) rejecting torture and terror and demonstrating this by closing and vacating Guantanamo and ceding to Cuba its rightful patrimony,
c) ending the U.S. embargo,
d) releasing the Cuban Five, and
e) extraditing Luis Posada Cariles;
10. While this list is not exhaustive, it represents a much’needed down payment on hope and change.
11. We will disseminate this document through our respective networks.

El Imperio and the Declaration of Human Rights

Since my son Casey was a victim of the U.S. military empire in 2004, I have traveled the world and met with people in almost 20 countries that have also been victimized by the U.S.

Whether it was the First Nation people in Honolulu who could no longer fish or swim in their ancestral waters of Pearl Harbor because of the toxic contamination by the Navy or my brothers and sisters in Daichuri, South Korea, whose village was being destroyed so the nearby Army base, Camp Humphrey, could build a golf course, I always walk away from these encounters with an extra steely resolve to try and confront the U.S. military industrial complex wherever I can and to try and ease the suffering of so many people.

Today, I am in Havana, Cuba, for an international gathering of human rights activists on the 60th anniversary of the signing of the Declaration of Human Rights. Besides Cuban activists, we heard the testimony of activists from Guatemala, Ecuador, Argentina, Brazil, Bolivia, Venezuela, Nicaragua, Spain and Puerto Rico, among others. In the translator hanging off of my ear, I heard time and time again, “the empire,” or “el imperio.” The empire is, of course, the United States of America. No question about it.

The U.S. has been meddling in the affairs of these South American and Latin American countries for centuries. We have installed dictators after overthrowing democratically elected and popular governments. We have used these countries as a dumping ground for our toxic products and have used the IMF and World Bank to impoverish governments so they would be crushed by debt after we unleashed economic hitmen on these already poor countries. We steal their natural resources and, if any Latin American leader dare stand up to The Empire, he will be either executed or demonized as we try to undermine his effectiveness.

Today, I heard the testimony of Camilo, whose father was killed in the terrorist attack by Luis Posada Carriles on a Cuban airliner. Carriles is being harbored by the U.S., which refuses to extradite him to Venezuela to face charges for the murder of 73 Cubans. But, but, but, I thought the U.S. did not harbor terrorists? I also met again with family members of the Cuban 5 who have been in U.S. prisons for 10 years after being arrested for espionage while they were ferreting out terrorism against Cuba in Miami.

On Human Rights Day, we should be celebrating the fact that we live in a country that practices peace over war, economic justice over rancid capitalism, environmental protection over ecologic degradation, and human rights over torture, occupation, oppression and murder.

However, if one takes the time to read the entire document of the Universal Declaration of Human Rights, it becomes apparent that the U.S. is the biggest violator of the UDHR on the planet.

No country is perfect, but the people of the USA, my brothers and sisters, sons and daughters, must take leadership in first internalizing, then fostering the precepts of the UDHR.

With more and more of our fellow citizens becoming unemployed, uninsured and food insecure, we may soon join the ranks of these Third World countries that have had to suffer deprivation while we consumed an over-excess of the world’s resources.

Eleven million children around the world, over 30,000 per day, die before their fifth birthdays each year.

That is not a statistic that I can live with. I hope it will also spur you to confront The Empire in every way possible.

Help us continue our fight against The Empire. Please make a donation today to support our continued work. Without your contribution, we can’t pay our bills. Please help! Click here to donate today.