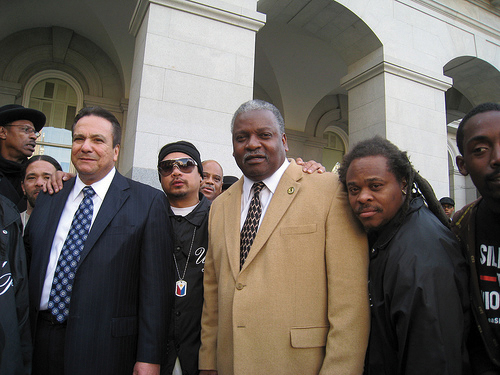 “How does it feel to be standing in your state capitol?” asked Minister Christopher Muhammad. “Good,” roared the crowd of hundreds gathered around the balcony in the ornate capitol rotunda in Sacramento. “Some of you have never been here before, and I have to confess I think this is the first time I’ve been here.

“But this is where the laws are made that you and many of your family members have been impacted by. Your young men have been arrested and you didn’t know why. And when they went to court and you found out they were being charged with certain laws that you didn’t even know about, those laws were made right here.

“So when you got upset that your cousin or your nephew who got caught with some minor offense but then had to do 20 years … it’s because of those laws that were made right here – the laws the police departments enforce.”

On Feb. 19, hundreds of people who have been attending town hall meetings in nine cities in and around the Bay Area – motivated by the BART police execution of Oscar Grant III and other critical threats to our communities – made the first of many Caravan for Justice trips to Sacramento, where lawmakers have been given a pass. Now those lawmakers and policy enforcers are being put on notice. No more business as usual. For too long too many have fallen prey to injustice.

“But because we’re in unity – Black, Latino, Asian, Pacific Islander and White, joined together by a common cause – you have filled the state capitol … 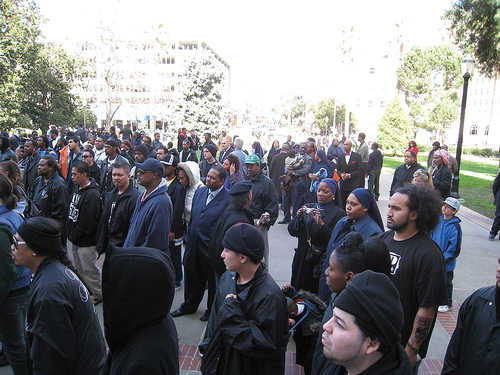 “This is the first Caravan for Justice. Now we want to go back to our communities, our cities, and let them know we had a victory today, and go back and organize like you’ve never organized before. …

“We didn’t come here to tippy-toe, we didn’t come here to sneak around and be scared. We came to let the people who run this state know that we are no longer going to be the feeder system for the prison industrial complex. No more are our babies going to be identified as the potential residents of San Quentin and Folsom. Those days are over with. …

“What other reason do we have to live than to stand up and defend our children?”

It is not too often that Sacramento sees so many strong women, children and men, mostly Black, united and partnering with Asians, Polynesians, Whites, Native Americans, Latinos and others to make a bold statement: “We are here at the capitol – this Caravan for Justice. Hear our clarion call for justice and fair play or forever hold your peace.”

Riot police were there in force – snipers on rooftops, police mounted on horses and even the SWAT team replete with plain clothes law enforcement were seen all over the place. We are a righteous people and we conquer with LOVE, so the police were shocked to see us walk upright, tall and with dignity – NO fear in our hearts. 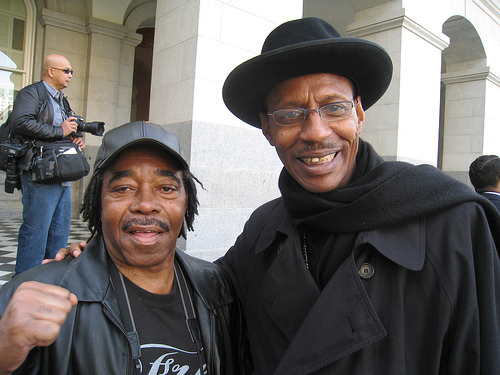 “All roads lead to Sacramento,” said Archbishop Franzo King from the steps of the capitol as he prepared the people for their mission: “This is where we can make the change. We can’t wait until we get into the courtrooms, but we’ve got to go where the laws are being fashioned and formed, those laws that don’t consider us, but it seems that we carry the weight of those laws.”

As helicopters buzzed overhead, Assemblymember Sandre Swanson of Oakland, chair of the Black Caucus and a long time ally, standing beside Assemblymember Joe Coto, former chair of the Latino Caucus, welcomed the Caravan for Justice: “We cannot lose a generation of our children. We cannot allow for there to be unfair and unjust laws that do not allow our community to prosper and to develop.”

Minister Keith Muhammad told the crowd: “We’ve been called to Sacramento because peace has been broken. Peace is broken because the people have not known justice. …

“The city of Oakland is reverberating today because our brother, Oscar Grant III, was gunned down for all of us to see on television. And when the district attorney had in his hand the authority to arrest and bring charges against a videotaped murderer, he said to us that whenever law enforcement is involved in a homicide, they’re not compelled to bring law enforcement to the bar of justice with deliberate speed. …

“We discovered that the state of California and its legislators, right here, passed a special Bill of Rights for police officers. You and I believe that we’re already protected by the Bill of Rights, and you and I are taught that law enforcement practitioners are paid to protect and serve your and my rights. But they never told us that when law enforcement was developed in U.S. history that the first police departments were formed to catch escaping slaves. …

“I saw (Oakland) Mayor Dellums break down in tears because when he stood after no charges were brought against Officer Mehserle of BART for shooting our brother Oscar Grant down and attempted to speak to our young and some of them cussed him out, he didn’t understand initially why he was being cussed. But we helped him to understand that the reason he was cussed out is not because of what Ronald Dellums did.

The sun was shining and early this morning around 6:05 the Senate had passed the state budget after stalling the process for months. Then a few hours later, the Assembly followed suit – and California now has a budget.

Of course this means nothing much in reality; the state of California is BROKE. Our state, which once held the distinction of having the fifth most economically sound economy in the world, is floating in a cesspool of confusion being confounded by GREED – a fiscal morass.

Incarceration is a trillion dollar business where mostly Black men are targeted. Money is made off those incarcerated for long periods without just cause.

The Three Strikes law is faulty and many an innocent person lingers in jail at the mercy of the correctional officers, who will do anything possible to increase the jail population so that they can make money – while torturing and treating those incarcerated like animals.

A panel of three federal judges, led by Judge Thelton Henderson, recently made a preliminary ruling ordering California to free those prisoners who are low-risk. But the correctional officers want the prisoners to stay put so that they can earn their fat salaries and justify it by the size of the prison population, even though the prisons are so overcrowded that health and safety is severely threatened.

We have serious issues with education – schools getting less funding and many a school in disrepair. We the people demand good schools but the policy makers are for building jails. For too long have we the people allowed greedy leaders to call the shots. We were there to tell them, “Your days are numbered.”

Most of the assembly and senate members had gone home after spending the night to resolve the budget crisis. There were only a handful to greet us, but those who met us were impressed. We are educated on the issues.

It is from the halls of Sacramento that so many bills have been passed without any meaningful dialog with the people. Until 1924, white governors sent edicts to kill Native Americans and, if you did, you could fetch a measly $5 for a scalp – no questions asked.

This is perhaps the first time in the history of Sacramento that so many Blacks – united with Latinos, Asians, Polynesians, Native Americans and Whites – have stood shoulder to shoulder to fight for what is right. Our next Caravan for Justice will be larger and much more powerful. Then there will another and still another and soon we will take over Sacramento.

Love conquers all. We saw it today.

Francisco Da Costa is the director of Environmental Justice Advocacy, www.hunterspointnavalshipyard.com. He can be reached at fdc1947@gmail.com or through his website, www.franciscodacosta.com. Many more of his photos of the Caravan for Justice are posted at http://www.flickr.com/photos/franciscodacosta/sets/72157614139656796/show/. Visit www.caravanforjustice.com for a plethora of videos.

What a vacation: 400 miles by bus on hunger strike’s 47th day