550 cities could participate in the largest, organized back-to-school effort in U.S. history 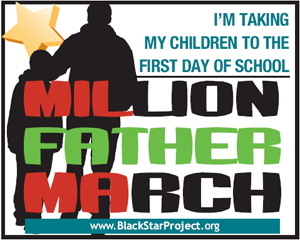 The Black Star Project is sponsoring the Million Father March 2009 on the first day of school in nearly 550 cities across America. The Million Father March has become a special day that fathers and men use to make a commitment to their children, their families, their communities and their country with their dynamic presence at a school. This is the real fathers’ day!

The Million Father March 2009 will play out at thousands of schools across America and in other parts of the world. An estimated 600,000 men in 475 cities participated in 2008. This year, an estimated 800,000 men from 550 cities are expected to participate. The Million Father March also provides an escort of safety, support and encouragement to children of all ages on their first day of school. Black Star Project Executive Director Phillip Jackson says, “Gang recruitment, bullying and random violence goes way down on any day that a group of men are at a school.”

Research shows that children whose fathers take an active role in their educational lives earn better grades, get better test scores, enjoy school more and are more likely to graduate from high school and attend college. Additionally, children have fewer behavior problems when fathers listen to and talk with them regularly and are active in their lives.

A good father is part of a good parent team and is critical to creating a strong family structure. Strong family structures produce children who are more academically proficient, socially developed and self-assured. Such children become adults who are valuable assets to their communities. “Better parents produce better communities, better schools and better students with higher academic achievements,” says Jackson.

Participants in the event include fathers, grandfathers, foster fathers, stepfathers, uncles, cousins, big brothers, significant male caregivers and friends of the family. Although this event is created by Black men, women and men of all ethnicities are also encouraged to take their children to school on their first day.

Businesses are asked to give fathers and men two hours off that morning to take their children to school. Men will also be encouraged to volunteer at schools throughout the year. A special effort will be made to coordinate Latino fathers in La Marcha de los Padres.

Since schools across America and the world start the new school year on different days and months, the march will be a rolling event that takes place on the first day of this school year in cities, villages and towns between Aug. 3, 2009, and Oct. 2, 2009. The 2009 Million Father March is managed by the Black Star Project, U.S.A., sponsored by the Open Society Institute’s Campaign for Black Male Achievement and the Schott Foundation for Public Information, in partnership with the National Association of Black Social Workers, National PTA and the National Fatherhood Initiative.

Visit www.blackstarproject.org to bring the Million Father March to your city or for complete information about the march. You may also email blackstar1000@ameritech.net or call (773) 285-9600 for more information or to join the march.