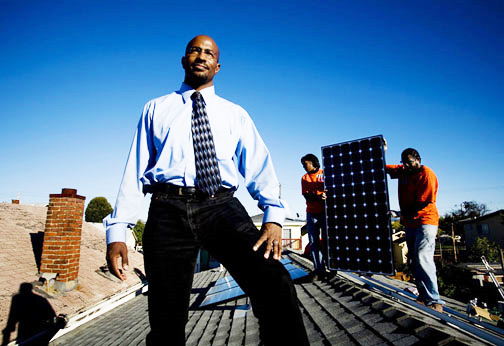 Okay, now, I’m really mad! The right wing bullies at Fox News – Glenn Beck and his ilk – are going after a man I know personally from years of progressive work in the Bay Area: Van Jones. Jones is a grassroots organizer who started the Ella Baker Center in Oakland, as well as the program Green For All. He wrote a best-selling book, one of the few books on environmental action written by an African American: “The Green Collar Economy.”

Now he’s being targeted by Glenn Beck and Fox News. His crimes: He once called the Republicans “assholes.” Is there a thinking person in this country who hasn’t?

He was arrested at a demonstration after Rodney King was beaten. He was a legal aid, arrested in a sweep when the San Francisco police surrounded the crowd and arrested everyone, including grandmothers who had just stepped out for a carton of milk. I remember that day – I escaped arrest myself because I stopped to order a pizza and arrived just 10 minutes too late. Charges against Jones were dropped and he was given a settlement by the city of San Francisco for his false arrest.

And in 2004, he signed a petition asking for an inquiry into the truth of 911. If every person in the country who questioned the 911 Commission is now to be banned from public office, we’d be left with a pretty sorry field of the utterly compliant from which to choose our public officials.

Van Jones’ real crime? He’s the triple threat: He’s Black, he’s effective and he is empowering the people in this country who have the least resources.

Make no mistake – the attack on Jones is racism rearing its ugly head. White folks in this country are allowed to carry guns into political meetings and call for the murder of the president on national TV. Black folks who might at some point in their life have expressed dissatisfaction with the going order are always at risk of being targeted.

The racism and the bullying isn’t actually very subtle – but here’s one sort of subtle point: The right wing is constructing a definition of “America” that leaves out the perspective of most people of color, most poor people, most truly progressive people – and then vilifies anyone who disagrees or even questions. Come to think of it, they’ve been doing that for decades.

If we let them target Jones, rest assured all of us who have any sort of progressive perspective whatsoever are on their hit list. If we let them define the terms of the argument, we are lost. If we give in to bullies, they will hit back harder. And if Jones goes down, the vital work he is doing, the attempt to bring together the environmental and social justice movements, will go down as well.

I try to restrain myself from sending out posts asking people to call and write and sign petitions, because otherwise I’d be sending one an hour. But I’m going to ask you to do this now:

Write Obama and leave your comments on his page, http://www.whitehouse.gov/CONTACT/. If you are from the Bay Area, let them know that we are Jones’ homies and we stand with him and with the work he is doing. And that we are proud of the progressive values he represents.

Buy his book and read it, if you haven’t already. Royalties are the best revenge! And it’s a damn good book!

Go to the Color of Change website, www.colorofchange.org, and sign the petition to urge advertisers to drop Glenn Beck. It’s having an effect – which has riled them up all the more!

The only way to stop bullies is to stand up to them!

In this video from March 2007, activist Van Jones talks about bringing green opportunities to the streets of Oakland: