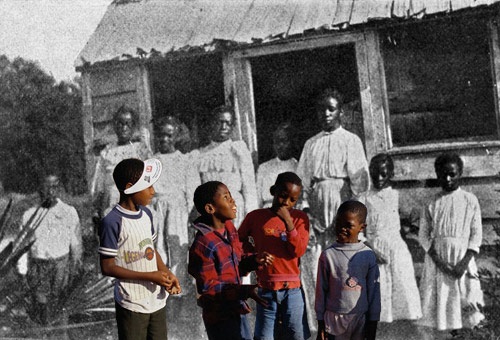 Some news is just too hot to cover and Project Censored for 34 years has been exposing the most under-covered censored news stories of the year with their annual release of the “Censored” yearbooks. Pre-ordered copies of “Censored 2010” will be available for shipping in early September.

Censored stories even include valid academic studies completed by university professors and scientific professional researchers. It appears that certain topics are simply forbidden inside the mainstream corporate media today. To openly cover these news stories would stir up questions regarding “inconvenient truths” that many in the U.S. power structure want to avoid.

For example, current research indicates that public schools in the United States are more segregated today than they have been in more than four decades. According to a new civil rights report published at the University of California, Los Angeles, schools in the U.S. are 44 percent non-white, and minorities are rapidly emerging as the majority of public school students in the U.S.

Latinos and Blacks, the two largest minority groups, attend schools more segregated today than during the civil rights movement 40 years ago. Millions of non-white students are locked into “dropout factory” high schools, where huge percentages do not graduate.

The most severe segregation in public schools occurs in the Western states, including California — not in the South, as many people believe. Most non-white schools are segregated by poverty as well as race. Schools in low-income communities remain highly unequal in terms of funding, qualified teachers and curriculum.

Other taboo stories include civilian death rates in Iraq and questions on 9/11. Researchers from Johns Hopkins University and a professional survey company in Great Britain, Opinion Research Business (ORB), report that the United States is directly responsible for over 1 million Iraqi deaths since our invasion six and half years ago.

In a January 2008 report, ORB reported that “survey work confirms our earlier estimate that over 1,000,000 Iraqi citizens have died as a result of the conflict which started in 2003 …. We now estimate that the death toll between March 2003 and August 2007 is likely to have been of the order of 1,033,000.” A 2006 Johns Hopkins study confirmed that U.S. aerial bombing in civilian neighborhoods caused over a third of these deaths and that over half the deaths are directly attributable to U.S. forces. Iraqi civilian death levels, including those killed in the summer of 2009, likely now exceed 1.2 million.

Former Brigham Young University physics professor Dr. Steven E. Jones and some 700 scientific professionals in the fields of architecture, engineering and physics have now concluded that the official explanation for the collapse of the World Trade Center (WTC) buildings is implausible according to the laws of physics. Especially troubling is the collapse of WTC 7, a 47-story building that was not hit by planes, yet dropped in its own “footprint” in 6.6 seconds in the same manner as a controlled demolition.

To support this theory, Jones and eight other scientists conducted chemical research on the dust from the World Trade Center. Their research results were published in a peer-reviewed scientific journal, “Open Chemical Physics Journal,” Volume 2, 2009.

The authors write: “We have discovered distinctive red/gray chips in all the samples. The properties of these chips were analyzed using optical microscopy, scanning electron microscopy (SEM), X-ray energy dispersive spectroscopy (XEDS) and differential scanning calorimetry (DSC). The red portion of these chips is found to be an unreacted thermitic material and highly energetic.” Thermite is a pyrotechnic composition of a metal powder and a metal oxide, which produces an aluminothermic reaction known as a thermite reaction and is used in controlled demolitions of buildings. 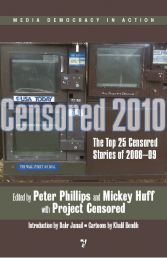 Each of these taboo news stories is based on solid scholarly research. These stories represent the failure of the corporate media in the U.S. to keep the American people democratically informed on important issues.

This lack of coverage of critical and potentially political news stories is what many thousands of people in the U.S. are now calling a Truth Emergency. This Truth Emergency is being addressed daily by Project Censored at our websites featuring independent news sources, http://mediafreedom.pnn.com/5174-independent-news-sources, and our daily blog at http://dailycensored.com/. Bookmark each of these sites on your desktop and stay abreast of the current news not covered in the corporate media.

The most important effort that needs to be made in freeing the media is to support independent media with regular financial gifts. Project Censored is just finishing our summer fund drive, where some hundred donors have contributed $8,500 so far.

Peter Phillips is professor of sociology at Sonoma State University, president of the Media Freedom Foundation http://www.mediafreedominternational.org/ and the former director of Project Censored http://www.projectcensored.org/. Daily non-corporate independent news is now on-line at http://mediafreedom.pnn.com/13160-validated-independent-news. This is an updated version of the story originally published on Aug. 10, 2009.

Africa for the Africans: U.S.-Euro forces out of Libya and Cote d’Ivoire

Wikileaks and the Imperial Press