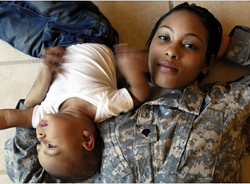 On Thursday, Feb. 11, Army Specialist Alexis Hutchinson, a single mother of an infant son, was informed she would be granted an administrative discharge from the Army.

Last fall, Hutchinson was ordered to prepare to deploy to Afghanistan. On Nov. 5, 2009, after her childcare plans fell through, Hutchinson was faced with the dilemma of having no one to take care of her son when she deployed to a war zone. (See Dahr Jamail’s original story, “Army sends infant to foster care, mom to Afghanistan,” posted to SFBayView.com Nov. 13, 2009.)

She chose not to show up for the plane to Afghanistan and missed her deployment. When she reported for duty the following day, the Army arrested her and took away her son, who was allegedly placed in an Army day care. His grandmother, Angelique Hughes of Oakland, California, picked him up a few days later. Alexis was granted leave to go home for the holidays in December and returned to Georgia with her baby, Kamani, in early January.

After Hutchinson returned to Georgia in January, the Army filed court-martial charges against her and refused to discharge her under the Army regulations that clearly allow for discharges for reasons of parenthood responsibility.

Both Hutchinson and her civilian attorney, Rai Sue Sussman, are happy with the results. In a press release from Sussman’s office, Hutchinson said that she is “excited to know what will happen to me, and that I am not facing jail. This means I can still be with my son, which is the most important thing.” Hutchinson will receive an “Other Than Honorable” discharge, but will not be facing criminal charges at a court-martial, which would have subjected her to a bad-conduct discharge and up to a year in jail if she lost, as well as a criminal record.

“Alexis is pleased because she now will have closure and knows what is going to happen to her,” Sussman told Truthout. “She is no longer waiting to possibly go to trial and jail, all the while trying to figure out what to do with her child. She feels she was treated unfairly overall but is relieved with this outcome.”

Until this recent decision, the Army had opted to court-martial Hutchinson as her commander believed she was attempting to get out of her Afghanistan deployment. Both Hutchinson and Sussman have consistently stated that Hutchinson always fully intended to deploy until her childcare plans fell through.

Hutchinson’s mother, Angelique Hughes, was thrilled with the recent news.

“I’m very happy,” Hughes told Truthout via telephone from her home in Oakland. “I just found out myself. I’m glad it worked out.”

However, Hughes was concerned about the fact that due to Hutchinson’s “Other Than Honorable” discharge, she will not maintain any of her benefits, like medical care for herself and her infant son.

“I don’t know why they didn’t give her an honorable discharge,” Hughes added. “Other single parents they’ve discharged got one. I’m glad they are letting her out, but now she lacks enough benefits … so it’s going to be a hard situation for her.”

Jeff Paterson, the director of the soldier advocacy group Courage to Resist, which has assisted Hutchinson, felt that the administrative discharge was a victory all around.

“I hoped she would have gotten a general discharge, but they seem to have had it out for her, so at least now she can move on,” Sussman explained. “I’ve never heard of a commander taking a child away from a person in this situation. But I think it’s a success, and we’re very excited to hear that they decided not to go ahead with the criminal charges.”

Hutchinson chose not to speak to the media about the Army’s decision.

The Army has regulations regarding parents who miss deployment due to childcare plans falling through. The regulations call for an extension of time to find alternate caregivers, and to discharge a parent honorably if no solution is found.

Of these regulations, Sussman wrote on Thursday: “Here, the Army did not act according to their own regulations, and did not value the family responsibilities of this soldier. If they had, Spc. Hutchinson would not have been in this situation and would be getting a better discharge.”

Sussman told Truthout that she feels the way the Army handled Hutchinson’s situation “shows that it takes a lot of work to get the military to understand what single parents in the military are facing. Up until last week they wanted to court-martial her for choosing her child over her job.”

After Truthout reported that the Army had filed charges against Hutchinson, other media covered her situation, including several national outlets.

Speaking to Truthout about the role played by media coverage in Hutchinson’s situation, Sussman said. “I think that it kept her from being sent to Afghanistan to face a court-martial back in November.”

While both Sussman and Hutchinson are pleased with the Army’s decision, Sussman feels that Hutchinson’s plight does not send a positive message to parents – especially single parents – who plan on joining the U.S. military today.

“Her situation shows the Army is not really friendly to families,” Sussman told Truthout. “The lives of military families are very difficult and they often face a command that isn’t understanding or empathetic towards the situation of raising a child in that environment.”

Currently Hutchinson remains assigned to Hunter Army Airfield near Savannah, Georgia, where she has been posted since February 2008.

Hutchinson lives off post and places her son in day care when she goes to work.

Sussman told Truthout she believes Hutchinson should be discharged by the end of this month.

Dahr Jamail’s new book, “The Will to Resist: Soldiers Who Refuse to Fight in Iraq and Afghanistan,” is now available. As one of the first and few unembedded Western journalists to report the truth about how the United States has destroyed, not liberated, Iraqi society in his book “Beyond the Green Zone,” Jamail, winner of the 2008 Martha Gellhorn Award for Journalism, now investigates the under-reported but growing antiwar resistance of American GIs. Gathering the stories of these courageous men and women, Jamail shows us that far from “supporting our troops,” politicians have betrayed them at every turn. Finally, Jamail shows us that the true heroes of the criminal tragedy of the Iraq War are those brave enough to say no. Visit his website at http://dahrjamailiraq.com. The Bay View is proud to have been one of the first newspapers to publish his dispatches. This story first appeared at t r u t h o u t. 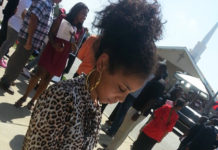