Slain 18-year-old Ferguson, Missouri, resident Michael Brown was laid to rest on Aug. 25. The funeral was a local and national event with thousands in attendance.

Brown was killed by a white police officer, Darren Wilson, on Aug. 9 while he walked through the streets of his neighborhood. His brutal death from six gunshot wounds fired at close range sparked immediate mass demonstrations in Ferguson that have continued for over two weeks.

The protests and rebellion in Ferguson highlighted the growing intolerance among African American working class youth for police repression. In response to the unrest in this suburb outside of St. Louis, tens of thousands more gathered in solidarity in cities across the U.S.

Police and governmental responses to the demonstrations in Ferguson are designed to violently suppress dissent. Military equipment and law-enforcement deployment tactics used in this majority African American town of 21,000 resembled those utilized in Afghanistan, Iraq, Somalia, Palestine and other regions of the world where U.S. imperialism is seeking directly or indirectly to oppress and exploit the people.

Police are the main source of violence in Ferguson

On Aug. 19, police set off teargas and pepper spray along with firing bean bags and rubber bullets into a crowd of several hundred peaceful demonstrators. Journalists were told to leave the area and dozens of people were arrested.

Corporate news reports of the destruction of private property were designed to provide a rationale for the heavily militarized police response to the demonstrations. During the course of the first 10 days of the unrest, several people were reported injured and wounded by gunfire.

According to a Press TV report that day: “Capt. Ron Johnson of the Missouri State Highway Patrol said early Tuesday that 31 protesters have been arrested, with some coming as far away as New York and California. He noted that at least two people have been wounded by gunfire. Johnson called on protesters to refrain from staging rallies during the nighttime, which, he said, provides cover for criminal elements.”

Despite these claims or suggestions that the demonstrations in Ferguson were being instigated by so-called “outside agitators,” arrest records reveal that most people who were detained were from the area. Those who were suspected of being from other cities were deliberately targeted by police for arrests and beatings.

Several journalists were also arrested and gassed during the course of the first two weeks of the demonstrations and rebellion. A “no-fly zone” was declared over Ferguson in efforts by the authorities to prevent aerial news reports of unrest in neighborhoods and business districts.

Johnson of the State Highway Patrol was designated as being ostensibly in charge of the law-enforcement deployments in Ferguson. He was said to have come from the town and would utilize a less aggressive form of policing the community.

Nonetheless, after several days of continuing unrest demanding that police officer Wilson be indicted and arrested in the killing of Brown, it became obvious that Johnson was not really in control. Gov. Jay Nixon ordered in the National Guard and attempted to minimize potential political damage that would hamper his much talked about aspirations for the vice-presidency of the U.S.

Johnson in his efforts to justify the daily brutality by the cops told the media on Aug. 19 that “‘officers came under heavy gunfire during the night,’ but said officers did not fire a single shot. They ‘acted with restraint and calm,’ he said. Johnson blamed a group of ‘lawbreakers’ and ‘criminals’ for the violence,” CNN reported.

Yet there was no condemnation from Johnson of the criminality of white police officers shooting down African American youth. The official line coming out of Ferguson was geared towards covering up the crimes committed against Brown and others seeking justice by manufacturing a so-called “criminal” element that posed a more immediate danger.

Although the officials in Ferguson have stated repeatedly that Officer Wilson’s record was clean, it surfaced on Aug. 24 that he had been a member of a nearby police force that was disbanded due to reports of racism and corruption. Wilson was employed in the Jennings police department when all 45 officers were fired. (New York Daily News)

In an article published by the New York Daily News in reference to the disbanding of the Jennings police force, it states that “The ‘straw that broke the camel’s back’ was when an officer, who was not Wilson, chased a woman outside of the city’s limits and shot at her vehicle with a child in the backseat, Rodney Epps, an African American city council member in Jennings, told the newspaper. Wilson then went to work at Ferguson, where he has not had any disciplinary action and received a commendation by the Ferguson council for subduing a man involved in a drug transaction, the newspaper reports.”

Illustrating the racist support for police brutality and terrorism against African Americans is being further revealed in a campaign that is holding demonstrations and raising funds for Wilson. Polls reflect that many whites in the U.S. still do not understand the implications of racist state violence directed against people of color communities.

Responding to the growing criticism against racist police violence and the militarization of law-enforcement, the administration of President Barack Obama sent Atty. General Eric Holder into Ferguson on Aug. 20 to discuss the Justice Department’s investigation of the killing of Brown. An Obama administration official told journalists that the president “has directed a review of federal programs and funding that enable state and local law enforcement to purchase military equipment”. (AFP-Reuters, Aug. 24)

This review will purportedly examine “whether these programs are appropriate, whether training with the equipment is sufficient, and whether there is enough federal oversight of the gear’s use. The investigation will be headed by White House staff including the Domestic Policy Council, the National Security Council [and] the Office of Management and Budget”, the official said. (AFP-Reuters)

Despite this investigation, the killing of African Americans and other oppressed people are continuing in the U.S. and even in the state of Missouri. In nearby St. Louis, an African American man, Kajieme Powell, was gunned down less than two weeks after the death of Brown.

On Aug. 19 these were the circumstances surrounding the death of Powell captured by a cellphone video camera and reported by Press TV: “The video shows the officers pulled up to the sidewalk, where the video shows Powell walking up and down, with his right hand in the pocket of his sweatshirt. Officers pull up in a squad car, exit and draw their weapons, and can be heard shouting indistinguishable instructions to Powell.” (Aug. 21)

This same report goes on to point out that “The victim can be heard shouting ‘Shoot me! Shoot me!’ He retreats and then walks towards officers again, who fire on him. He was killed four miles from Ferguson, Missouri, the scene of ongoing protests over the death of Michael Brown, 18, who was shot to death by police on August 9.”

The fact that these developments are occurring with the national and global spotlight focused on this region of Missouri proves that the struggle against racist state violence must be led by the African American people and their allies. These forms of repression derive from the necessity of the ruling class to maintain social and political control over of the oppressed nations whose youth and other age groups have no future under the system of capitalism.

Only the mass organization and mobilization of the African American people in conjunction with other oppressed nations and their class allies will provide any hope for the end to racist state-sanctioned violence. The capitalist system has historically relied on racism, utilizing mechanism of coercion and control along with the division of the working class along racial lines, to maintain the exploitative system. Consequently, the struggle to end racism takes on a class dimension in undermining the material basis for national oppression and for the construction of a socialist society.

Benjamin Crump speaks at the funeral

“It was 162 years ago, about 10 miles from this great building where we say our final respects to young Michael Brown Jr.

“They say that it’s still referred to as the Old Courthouse where the Missouri Supreme Court issued the Dred Scott decision. And the substance of that decision was that a person of African descent could not, nor were they ever to be considered a citizen pursuant to the United States Constitution. Now, one could logically conclude that this follows the precedent set by the 1787 three-fifths amendment that said an African American was to be considered three fifths of a man.

“But we declare here today, as we pay our final respects to Michael Brown Jr., that he was not three fifths of a citizen. He was an American citizen. And we will not accept three-fifths justice. We will demand equal justice for Michael Brown Jr.!” 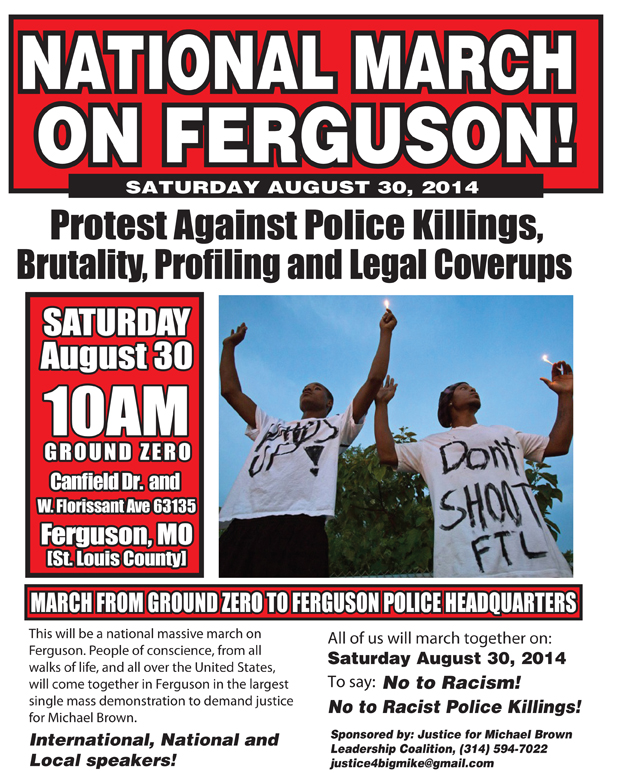