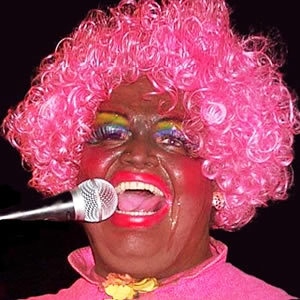 Here we go again! It has become painfully obvious to me that some members of the lesbian, gay, bi-sexual, transgender and queer (LGBTQ) community would rather divide than build bridges between communities. For instance, Charles Knipp, a racist and culturally insensitive White gay male, dons a Black face telling jokes that reinforce stereotypical images of Black women and Black culture. Knipp’s reported professional experience includes working as a nurse and a minister.

Interestingly enough, he believes God has ordained him to raise awareness and heal America’s racial issues through laughter. Ordained by God? This belief is reminiscent of the teachings of slave masters who believed that slavery was the manifestation of a human order ordained by God. Knipp has dual American and Canadian citizenship. He is best known for his misrepresentation and denigration of Black women.

He plays Shirley Q. Liquor in drag – a heavy-set, shoplifting, promiscuous, inarticulate, malt liquor drinking single parent Black woman that doesn’t know who the fathers of her 19 children are. If that wasn’t enough, many of the children are named after sexually transmitted infections, like Chlamydia.

Knipp has been touring the country for a number of years spewing his racist venom in venues that will accept him, mostly White gay venues. In a Rolling Stone magazine interview, he admitted that most of his loyal followers are racists and White gay men. Fortunately, some of his performances have been successfully canceled in New York, Hartford, New Orleans, Boston, Atlanta and Hollywood.

Knipp is now bringing his blackface minstrel show to California to “allegedly” shed light on the plight of Black women. His show is scheduled at the Russian River Resort in Guerneville, which Supervisor Bevan Dufty referred to in a letter to me as “an extension of San Francisco.”

The Russian River Resort is located about 69 miles outside San Francisco where the majority of attendees are – you guessed it –White gay men. Even more disturbing, the theme of the show is Hurricane Weekend, in reference to Hurricane Katrina, and it will be performed on June 19, 2010.

June 19th or “Juneteenth,” as we all know, is a very significant and important event where Blacks from Texas and nationwide reflect and celebrate independence and freedom from the horrors of American enslavement. Knipp’s performances are deliberately scheduled around very important African American holidays and events, like Dr. King’s Birthday, Black History Month, Juneteenth and Kwanzaa.

I am outraged and can’t believe the Bay Area’s diverse community would allow such a performance in our own backyard. Why hasn’t this performance outraged the entire Black and LGBTQ communities? As many San Franciscans and Bay Area residents honor and celebrate Harvey Milk Day, May 22, 2010 – the nation’s first openly-gay elected politician of a major city – I can’t help but ask, “What would Harvey Milk do?” 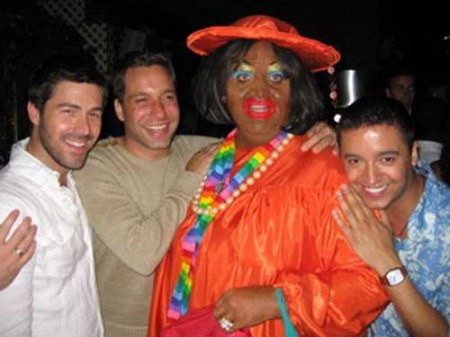 In 2009, several middle-age White gay men in San Francisco protested the performance of Buju Banton, a Jamaican artist, for his controversial anti-gay lyrics. The artist’s 1992 song “Boom Bye Bye,” where Banton sings of throwing acid in the face of a “batty boy,” equivalent to an effeminate man.

Perhaps this racial insensitivity is a response to the ongoing political and social discourse around “post-racism,” a term that implies racism as we once knew it is now over, using Barack Obama’s success as an example. Honestly, I don’t buy it, but I do believe racism has morphed into another monster. A monster that frightens some Whites into believing their economic and political aspirations are in jeopardy and gives some White gay men – who consider themselves minorities – the green light to openly and sarcastically attack the Black experience.

Bitter? No, I’m outraged! Outraged at the fact some Whites believe it’s OK to attack the misfortunes of Blacks. These attacks are simply being used in a patronizing fashion and as a way to resist being denied the pleasure of using racial parody in their performances.

Even if this racial parody offends and dehumanizes Blacks, these racially insensitive performers believe that the show must go on, regardless. Sounds like a strong case of White privilege to me.

There is also this flawed notion that the envelope should be pushed to honor racial and cultural innovations at the expense of the Black experience. The argument: Blacks are too emotional and sensitive around racial issues and are frozen in time.

Some critics further argue that slavery, Jim Crow and de facto segregation is a thing of the past. With such a small number of Blacks residing in San Francisco, it appears that Black issues must take a backseat. Even more so now that GAY has become the “new Selma” or the “new Black.” 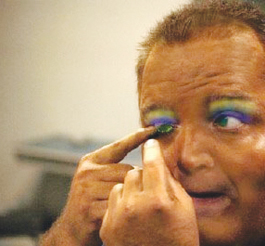 My outrage stems not from one’s ability to exercise freedom of expression, but the fact that some White people continue to think they know what’s best for Black people and our healing process. For example, Knipp (aka Shirley Q. Liquor) believes his use of blackface is a way to address the racial issues that Blacks are afraid to discuss. Really?! Since when have Black people been afraid to talk about racism, oppression or discrimination? While at the same time Knipp believes his performance is coming from a place of love.

Even more appalling, Shirley Q. Liquor invokes the support he receives from some Blacks, including RuPaul, a Black female impersonator who aspires to European standards of beauty. Think about it for a moment: RuPaul is an artist who is trying to revitalize her career even if it means supporting racially offensive and distasteful entertainers. Besides, RuPaul is not the spokesperson for the Black LGBTQ community.

While I am a true fan of the First Amendment and freedom of expression, Knipp utilizes hate speech to further his economic and social status by stepping back into the 19th century to dehumanize Black people. I am utterly furious about his racist attacks on Black women and I expect to see the same outrage that went into protesting the performance of a Jamaican artist to be directed at Shirley Q. Liquor’s performance.

Liquor’s performance is not a constructive way to bring about racial healing; it does however exacerbate racial tension. If there is to be peace and harmony across races, including harmony with the LGBTQ community, then we must all eliminate malicious attacks on Black people whenever they occur.

Most importantly, I urge you to join me by boycotting the Russian River Resort until they cancel the racially insensitive performance of Shirley Q. Liquor and agree to refrain from booking any future blackface minstrel shows. If left unchecked, it can cause greater harm and continue to drive a wedge between the Black and LGBTQ communities.

Should we just idly sit by and allow racism and White privilege to hide behind the First Amendment and dictate our legacy or do we work together to create a more welcoming community that respectfully honors the struggle and legacy of all communities?

Javarré Wilson, an Oakland-based writer, can be reached at Javarre@gmail.com.

A reader writes with these suggestions:

1) Contact Arthur, the manager of the Russian River Resort, to complain and protest this racist act.