by Christina Jackson, Greenaction for Health and Environmental Justice 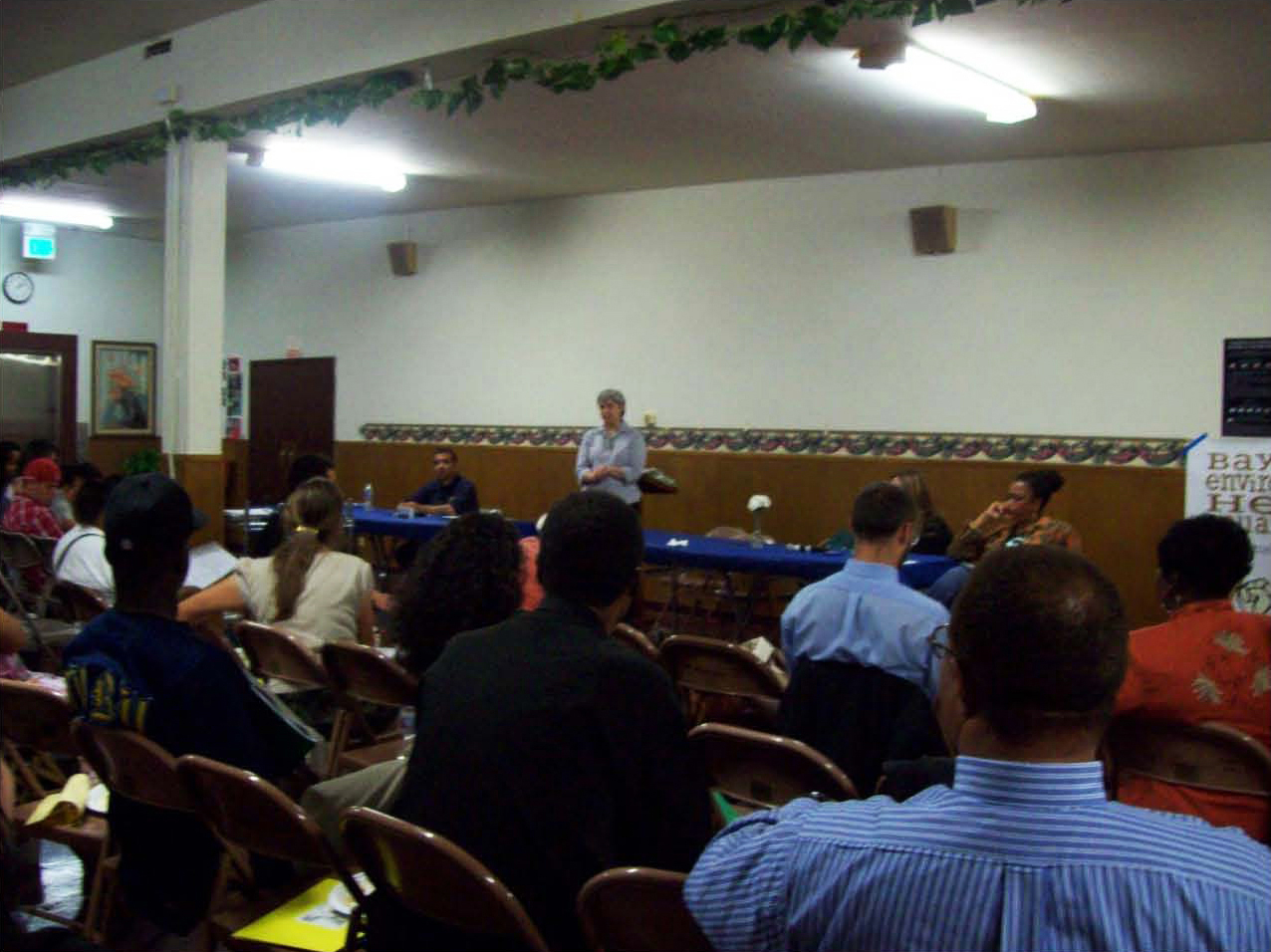 The Toxic Triangle hearing on June 12 at St. John’s Baptist Church was a success at bringing together Richmond, Oakland and Bayview Hunters Point communities under one roof to discuss and address environmental racism. Although few governmental regulators decided to attend, the Toxic Triangle Coalition met to collaborate on a plan of action. This coalition is comprised of community groups, faith-based leaders, policy makers and environmental justice organizations working together to stop the pollution and environmental racism and injustice that plagues low-income communities of color.

Formation of the Toxic Triangle Coalition

The Toxic Triangle was initially an idea formed by Rev. Buford of Allen Baptist Church and Minister Christopher Muhammad of the Nation of Islam as a way to unite Richmond, Oakland and Bayview Hunters Point in the face of polluting plants and regulators who are cozy with polluters. By uniting communities, these agencies cannot “divide and conquer” low income groups of color by addressing pollution in one community and not a neighboring one a few miles down the road.

Rev. Buford said, “We need to develop a regional strategy to address environmental issues. It’s no coincidence.” This unified regional strategy will urge regulators to take action addressing all the low-income communities of color in the Bay Area collectively.

Several panels defined and discussed cumulative impacts, provided opportunities for residents to talk directly to governmental regulators and environmental lawyers and to voice a list of demands. The coalition is calling on government agencies to reduce the cumulative, combined impacts of the many polluters in our communities by reducing existing pollution, stopping new pollution and adopting regulations that consider cumulative impacts when evaluating the risk posed by pollution.

This policy totals up the emissions from all sources of land, air, water and traffic pollution that accumulate in a neighborhood where many toxic facilities are located. Greenaction and the Bay Area Environmental Health Collaborative (BAEHC) have helped to identify toxic sources in Bayview Hunters Point. The Hunters Point Shipyard, the PG& E plant toxic site, the sewage treatment facility, other dirty industries and two freeways, 101 and 280, all pollute the Bayview Hunters Point neighborhood simultaneously. All of these sources decrease the overall quality of living for residents that many corporations and government agencies do not take into account.

The presentation by Ingrid Brostrom, an attorney for the Center for Race, Poverty and the Environment, taught residents about laws that can be used to fight environmental racism and injustice. First, Brostrom informed residents about Title VI of the U.S. Civil Rights Act of 1964. Title VI prohibits recipients of federal funding, such as states, cities and counties, from discriminating based on race within federally funded programs or facilities. This act is difficult to maneuver because deliberate racial intent by the corporation or other polluter must be proven in order to file a lawsuit, but administrative complaints can be filed against agencies that discriminate and commit environmental racism.

The California Environment Quality Act (CEQA) is a law that requires that all significant pollution impacts be avoided before a development starts, if possible. As we have seen with the San Francisco Planning Commission’s June 3 decision to approve the draft Candlestick Point-Hunters Point Shipyard Environmental Impact report, corporations can phrase their promises about environmental quality in persuasive ways that allow CEQA to be overlooked, but many communities have succeeded in challenging permits issued to polluting projects by using the law’s remedies.

Residents from Richmond, Oakland and Bayview Hunters Point testified to government regulators from EPA and the Department of Toxic Substances Control. Representatives from the San Francisco Health Commission and Department of Public Health, Bay Area Air Quality Management District, Bay Regional Water Quality Control Board and the Navy declined their invitations to this hearing.

Residents discussed the many undiagnosed and unidentified health and skin problems that have resulted from the many pollution sources such as Chevron, the Navy’s Hunters Point Shipyard and the PG&E toxic site. As regulators shifted in their seats, looking uncomfortable, they took down notes of the communities’ concerns. In reference to polluting corporations, a community resident said that they “favor money over ethics!”

By the end, community leaders identified a plan of action with EPA demanding a public meeting in the next couple of weeks and also an invitation to the third Toxic Triangle hearing in Richmond during the month of October. Stay tuned for information on the next Toxic Triangle meeting. For more information, contact Greenaction for Health and Environmental Justice at (415) 284-5600 and visit www.greenaction.org.