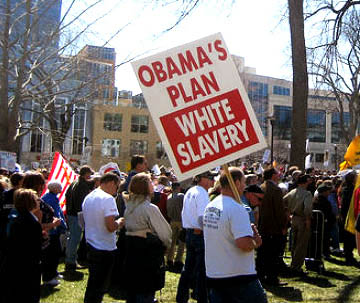 Many, if not most, of the people who are active in the “Tea Party” movement are reacting to the fall of the American economy.

They see vast home foreclosures, factory closings, the loss of jobs and the resultant loss of pay across a wide spectrum of the working class and they are afraid, very afraid.

It’s been said that money is the mother’s milk of politics and, while that’s true, it’s also true that fear is powerful currency in the hands of unscrupulous politicians.

And once you add media, it’s political TNT.

It doesn’t really matter who’s feared; fear’ll do the trick.

For many of them, Mexican immigration is a bubble into which the fear of the foreigner, lost jobs, crime and even contagion come together with explosive power. And politicians are riding it like broncos.

President Barack Obama, as a dark(er) man with an exotic name and African origins, also attracts a good slice of that fear. 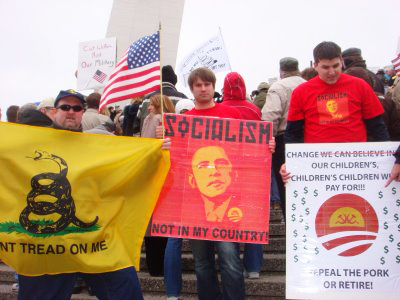 Few of them seem to see that Clinton-era globalization policies gutted key industries, as middle class jobs were flushed to the global South and then on to the East to insure higher returns to investors and corporate owners and manager. Jobs gone to low wage countries, forever.

It used to be a man or woman, Black, white or Latino, could get a job at a car factory like GM with a high school diploma that paid middle class, family raising wages.

Those days are passing into the rear-view mirror.

Now, college graduates feel lucky to get any jobs, even an internship.

The Tea Party, although funded by rich families, does not target the corporate and economic forces which created their present nightmares.

They bellow about lower corporate taxes and the shrinkage of government – ignoring the simple fact that the U.S. pays almost half the corporate tax rate of most industrial countries or that the U.S. population has doubled between the years 1950 and 2000 (from 150 million to over 300 million).

Their fears, to say the least, are misdirected.

For a revolutionary Black History Month