The organizations expressing their support in this letter are sponsoring a rally and march on Friday, Dec. 17, starting at 4 p.m. at North County Jail, 661 Washington St. in Downtown Oakland, and marching to 14th and Broadway for 6 p.m. rally at City Hall – JOIN THEM!

We, as members of activist and community organizations in the Bay Area of California, send our support for your strike against the terrible conditions you face in Georgia’s prisons. We salute you for making history as your strike has become the largest prison strike in the history of this nation. As steadfast defenders of human and civil rights, we recognize the potential that your action has to improve the lives of millions subject to inhumane treatment in correctional facilities across this country. 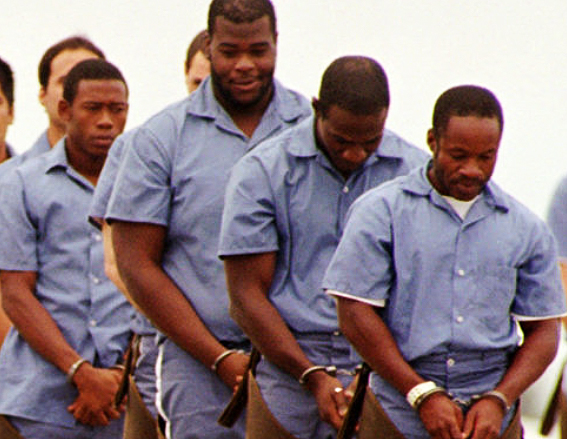 Every single day, prisoners face the same deplorable and unnecessarily punitive conditions that you have courageously decided to stand up against. For too long, this nation has chosen silence in the face of the gross injustices that our brothers and sisters in prison are subjected to. Your fight against these injustices is a necessary and righteous struggle that must be carried out to victory.

We have heard about the brutal acts that Georgia Department of Corrections officers have been resorting to as a means of breaking your protest and we denounce them. In order to put a stop to the violence to which you have been subjected, we are now in the process of developing contacts with the personnel at the different prison facilities and circulating petitions addressed to the governor and the Georgia DOC. We will continue to expose the DOC’s shameless physical attacks on you and use our influence to call for an immediate end to the violence.

Here, in the Bay Area, we are all too familiar with the violence that this system is known to unleash upon our people. Recently, our community erupted in protest over the killing of an unarmed innocent Black man named Oscar Grant by transit police in Oakland. We forced the authorities to arrest and convict the police officer responsible for Grant’s murder by building up a mass movement. We intend to win justice with you and stop the violent repression of your peaceful protest in the same way – by appealing to the power and influence of the masses. 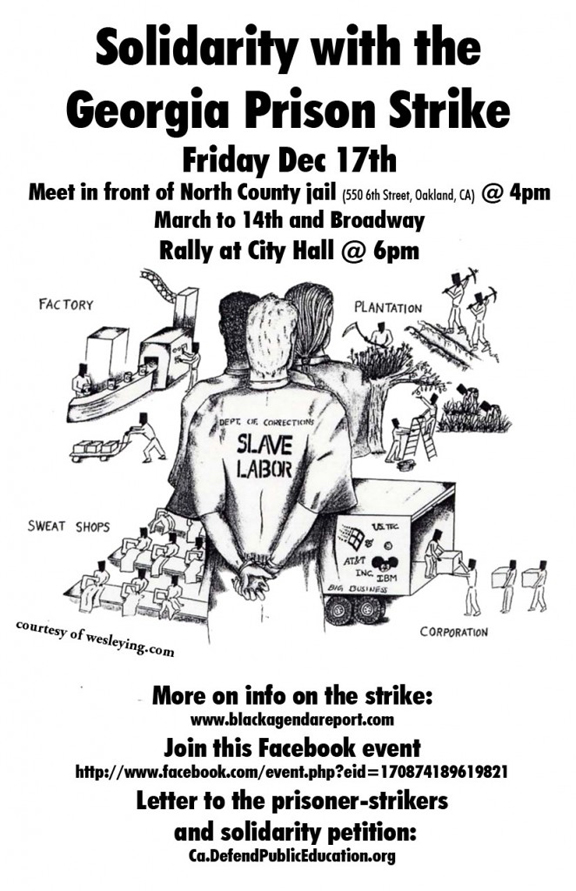 We fully support all of your demands. We strongly identify with your demand for expanded educational opportunities. In recent years, our state government has been initiating a series of massive cuts to our system of public education that continue to endanger our right to a quality, affordable education; in response, students all across our state have stood up and fought back just as you are doing now.

In fact, students and workers across the globe have begun to organize and fight back against austerity measures and the corresponding violence of the state. Just in the past few weeks in Greece, Ireland, Spain, England, Italy, Haiti, Puerto Rico – tens and hundreds of thousands of students and workers have taken to the streets. We, as a movement, are gaining momentum and we do so even more as our struggles are unified and seen as interdependent.

At times we are discouraged. It may seem insurmountable. But in the words of Malcolm X, “Power in defense of freedom is greater than power on behalf of tyranny and oppression.”

You have inspired us. News of your strike, from day one, has served to inspire and invigorate hundreds of students and community organizers here in Berkeley and Oakland alone. We are especially inspired by your ability to organize across color lines and are interested in hearing an account from the inside of how this process developed and was accomplished.

You have also encouraged us to take more direct actions toward radical prison reform in our own communities, namely Santa Rita County Jail and San Quentin Prison. We are now beginning the process of developing a similar set of demands regarding expediting processing – it can take 20-30 hours to get a bed; they call it “bullpen therapy” – nutrition, visiting and phone calls, educational services, legal support, compensation for labor and humane treatment in general. We will also seek to unify the education and prison justice movements by collaborating with existing organizations that have been engaging in this work.

We echo your call: No more Slavery! Injustice to one is injustice to all!

In us, students, activists, the community members and people of the Bay Area, you have an ally. We will continue to spread the news about your cause all over the Bay Area and California, the country and world. We pledge to do everything in our power to make sure your demands are met.

This letter originally appeared at Defend California Public Education on Dec. 15, posted by Juan G. It is also available there and below as a petition you can sign: Solidarity Petition for the Prisoners on Strike in Georgia.