There is a new addiction going around amongst young people in inner city communities. This new addiction has them slowly sipping their lives away with a deadly mixture of Sprite and a cough suppressant called promethazine-codeine syrup.

Sizzurp, purple sprite, lean, Bo and Barre are a few names that the streets use to describe this deadly concoction. Teens as young as 14 are experimenting with this drug, which is a legal prescription medicine used to treat severe cough and upper respiratory conditions caused by allergies or the common cold.

Rap artists like Gucci Mane make it seem cool to be on lean and Lil Wayne is publicly known for using this drug. In almost every photo in the media, he can be seen brandishing his styrofoam cup full of a purplish-colored drink.

This syrup sippin’ epidemic has become popular amongst young people of color, but when mixed with other drugs such as ecstasy, alcohol and marijuana it can be fatal, especially if you are operating a motor vehicle. There’s even a form of music known as chopped and skrewed, where the music is chopped down and played at a very slow speed for users of promethazine-codeine to enjoy while being under the influence.

“I’m addicted and it makes me feel good,” stated a young man I interviewed, who did not want his name published. When I asked him what the thrill of drinking syrup was, he was leaned over in his seat and barely responsive for about 10 minutes before slowly waking up asking me to repeat the question.

According to the website, www.drugs.com, promethazine-codeine syrup may cause drowsiness, dizziness, lightheadedness or blurred vision. These effects may be worse if you take it with alcohol or certain medicines. They strongly suggest if you have a prescription that this medicine should be used with caution. Just imagine, if this drug is dangerous for a person who it is prescribed to, how harmful do you think it will be to a healthy young person who is taking it for recreational purposes?

In another warning, the website states that the usage of this drug can cause neuroleptic malignant syndrome (NMS), which is possibly fatal. Symptoms may include fever, stiff muscles, confusion, abnormal thinking, fast or irregular heartbeat, and sweating.

The website Wikipedia.org has described it as a “purple drank” and defines it as “a slang term for a recreational drug popular in the hip hop community, originating from Texas.” They also describe this drug with two other names that I was unfamiliar with: “Texas tea” and “purple jelly.”

Rappers and inner city youth are not the only ones experimenting with this deadly drink. On July 5, 2010, former Oakland Raiders quarterback JaMarcus Russell was arrested at his home in Mobile, Alabama, for possession of codeine syrup without a prescription. He was arrested as part of an undercover narcotics investigation. Russell was booked into city jail and released soon afterwards after making his bail.

With the discovery of drugs like salvia, ecstasy pills, crystal meth and now lean, it seems like this cycle of deadly experimentation with drugs has taken a turn for the worse in our communities.

So I know you may be wondering how are young people obtaining this, and the answer is unknown. A few people informed me that they buy it from older adults or senior adults who can get the prescription from their doctor. One bottle can have a street value price of anywhere from $75 to $150, which is a big profit in this economy to a person who may be receiving it free. 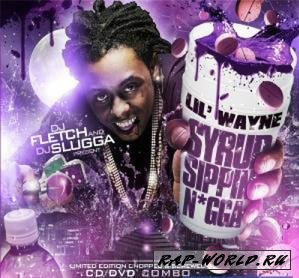 This frightens me to know that people who may really need the drug are selling out the youth of the community and turning them into leaning zombies. A zombie doesn’t have a care in the world – just walks around in a fog and a daze, oblivious to what is going on in reality, waiting to drop dead one day. And that is exactly what is happening to the lost souls of our youth who are sippin’ on this lean.

Although in my past I have had my experimentation with drugs, I personally have never experimented with this drug and am happy that I didn’t because it can be deadly to people like myself who suffer from asthma. I am sure many of the users have asthma but are unaware of the game of roulet they are playing with their life by just one sip.

Along with drinking out of a styrofoam cup, they have also found it amusing to enjoy this drink from a baby bottle, like a Gerber juice bottle. I find it fitting, since many of them who consume this are nothing more than babies themselves.

Like any addiction, when used for long periods of time, this syrup can build a tolerance in your body and cause you to become dependent on this drug. Many of the youth now are already very dependent on it and have developed a need to keep taking it, slowly but surely evolving into syrup junkies.

Some of the side effects and withdrawal symptoms of this drug are anxiety, diarrhea, fever, runny nose, sneezing, goose bumps, abnormal skin sensations like crawling of the skin and a form of schizophrenia, where you begin seeing, hearing or feeling things that are not actually there. You may also have trouble sleeping and tremors throughout the day and night.

Parents of teens are cautioned to look for these signs in your children if they are often tired for no reason. They may be a part of the syrup sippin’ generation.

If you suspect someone has had an overdose of promethazine-codeine syrup, please immediately call 911 or the American Association of Poison Control Centers at 1-800-222-1222. If you are a user of this deadly syrup, before you take another sip, think hard about it, as if your life depended on it, because it truly does.