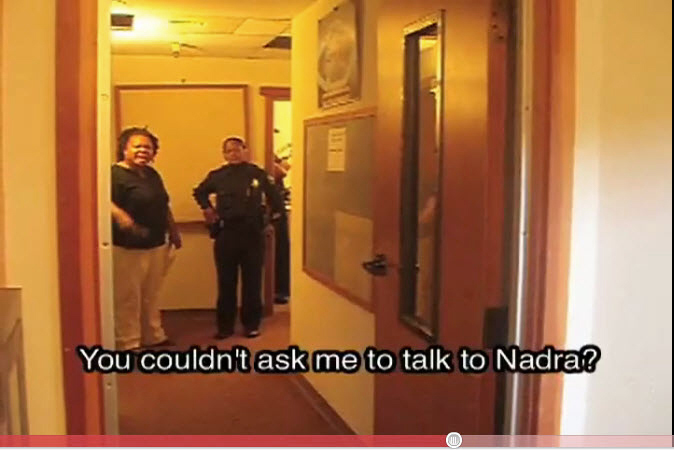 We applaud all of the broadcasters who came together to save KPFA last week, the station that many former paid staff members tried desperately for years to destroy. We applaud artists and fans of KPFA who have come together to make sure that there is a station called KPFA in 2011. We will not picket the fundraising event at La Peña tomorrow, but we demand that KPFA supporters, staff and concerned people of color deal with the following issues while they can still be dealt with on this level.

I want to be up front with why we have discussed protesting tomorrow night’s event. I felt it was important to write this because some people are reportedly saying that this protest is a personal attack against one staff member or another, when in reality it is a principled stand against police terrorism in the Black community, cronyism to the Bush regime and the lack of Black public affairs programming on KPFA.

To start off with police terrorism, the “staff appreciation night” organizers of the event at La Peña have done nothing to address the police beating, false imprisonment and false charges that former KPFA broadcaster Nadra Foster has had to endure over the last two years. No one has addressed the fact that her arm is paralyzed from this ordeal either.

Aileen Alfandary and Mitch Jeserich said that KPFA and Pacifica management calling police to the station and their beating of Nadra inside a KPFA studio was internal KPFA business and not news. Esther Manilla, one of the main organizers of Sunday’s La Peña event and a producer for the KPFA Morning Show, did not report it on the Morning Show or denounce the way the show ignored the incident.

With the exception of Nina Serrano, none of the broadcasters organizing this event used their power at the station to give this issue, which still has far reaching implications, any airtime. Why isn’t Nadra Foster’s contribution celebrated by these “staff”? Is it because she is Black?

It is interesting how many of these “unpaid staffers and sympathetic paid staffers” will work with Morning Show and Concerned Listener personnel who were on a binge to sink KPFA and break it off from Pacifica, just to give their boyfriends, grandsons and friends an opportunity to perform. It is interesting how these artists are agreeing to be ignorant pawns in this chess game called “KPFA and real community relations.” This is liberalism at best – and selling out if you want to be blunt.

Let us not forget that Brian Edwards Tiekert, a former host of the Morning Show, former treasurer for the Local Station Board and formerly a major influence on the Pacifica Finance Committee, is suing KPFA and Pacifica, represented by Harmeet Dhillon, co-chair of Lawyers for Bush-Cheney 2004. Is this fundraiser being used as a propaganda tool to get people to forget about the damage that the last KPFA Morning Show did and is doing to the image of KPFA? Where is Concerned Listener supporter and Morning Show producer Esther Manilla on these things that she was part and parcel to?

We ask everyone who attends this fundraiser, including the artists and the organizers who may have been ignorant of this history, to ask Esther, Pacifica Executive Director Arlene Englehardt, Nina Serrano, Aimee Allison, Kris Welsh, Kirsten Thomas, how can KPFA heal if we never talk about the case of Nadra Foster? Also ask them what has their role been in healing that situation, where a single mother and former broadcaster was hog-tied and carried out of the station on a bogus charge of trespassing. When I offered to help them to invite Nadra Foster to speak, they refused the request.

Now to address the lack of Black public affairs programming: The Nadra Foster incident would not have been broadcast at all if it was not for the graciousness of Hard Knock Radio to talk about being eye witnesses to this crime of police terrorism and for Flashpoints to run the interviews, which we appreciate.

I challenge all the artists involved to think about how they would feel if we, the Black community, took a position against the life and the voice of their community, then make the decision on whether they should perform. Thank you for reading this open letter to KPFA supporters.