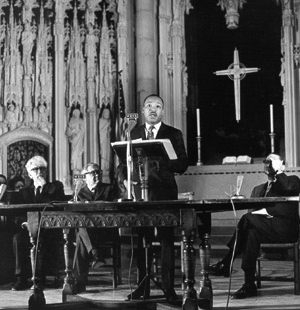 “We as a nation must undergo a radical revolution of values … when machines and computers, profit motives and property rights are considered more important than people, the giant triplets of racism, materialism and militarism are incapable of being conquered.” – Martin Luther King Jr., April 4, 1967

As we remember the courage and hope of Dr. Martin Luther King Jr., we must not forget that he spoke out and worked against the injustices of our nation, particularly those of racism, materialism and militarism. Indeed that is what made him so hated and so dangerous when he was alive.

We have achievements to celebrate: the repeal of “Don’t Ask, Don’t Tell,” the release of San Suu Kyi in Burma, the enactment of the Domestic Workers Bill of Rights by the New York legislature that extends important labor rights to 200,000 nannies and housekeepers, the victories of the Coalition of Immokalee Workers and the exposure of secret U.S. and other country machinations by Wikileaks, among others.

There has been progress in dismembering the laws of segregation which divided our country. We must celebrate the successes that many struggled to achieve. However, as we celebrate those victories, let us not lose sight of the challenges still facing this country.

Here are some of the facts about racism, materialism and militarism in the U.S. which we should reflect on as we decide how best to carry on the radical struggle for justice of Dr. King. (For each fact, I provide a brief cite to the sources which are listed at the end of the article).

Let us renew our commitment to the radical revolution of values for which Dr. King gave his life as we turn to the realities of current life.

Infants born to Black women are 1.5 to 3 times more likely to die than infants born to women of all other races or ethnicities. Black men and women are much more likely to die of heart disease and stroke than their white counterparts. Hypertension is by far most prevalent among non-Hispanic Blacks (42 percent vs. 29 percent among whites). Uninsured persons are only about half as likely to have hypertension under control as those with insurance. Source: Centers for Disease Control (CDC)

Twenty-five percent of Black workers and 43 percent of Hispanic workers do not have health insurance, compared to 15 percent of white workers. Kaiser Family Foundation

Overall, 16 percent of all whites, 21 percent of Blacks and 32 percent of Hispanics do not have health insurance. Census

In cities with large African American populations, Black segregation looks pretty much the same as it did 40 years ago; Hispanic segregation is on the rise. Princeton

Contrary to conventional wisdom, the crisis in subprime mortgages in minority neighborhoods was not the result of riskier lending spurred by the Community Reinvestment Act or a decline in underwriting standards. Princeton

Even with similar qualities – credit profiles, down payment ratios, personal characteristics and residential locations – African Americans were more likely to receive subprime loans. Similarly Blacks and Hispanics were significantly more likely than whites to receive loans with unfavorable terms such as prepayment penalties. The result: From 1993 to 2000, the share of subprime mortgages going to households in minority neighborhoods rose from 2 to 18 percent. Princeton

Because predatory lenders could efficiently target entire minority neighborhoods with subprime mortgages, larger numbers of people were affected than would have had they been more geographically spread out. In true layman’s terms, it was like “shooting fish in a barrel.” Segregated neighborhoods just made it too easy to engage large numbers of people in this devastating scheme and this multiplied the effect of the crisis. Princeton

Black middle class families have been stripped of more wealth by the real estate and foreclosure crisis than any single event in U.S. history. Due entirely to subprime loans, Black borrowers are expected to lose between $71 billion and $92 billion. Devona Walker

The Immigration and Enforcement Agency is on pace to deport about 400,000 people this fiscal year, more under the current administration than any before. Slevin

The top 25 hedge fund managers were paid on average more than $1 billion each in 2009. Schwartz, New York Times

Between 2002 and 2007, 65 percent of all income growth in the U.S. went to the top 1 percent of the population; that top 1 percent also held a larger share of income than any time since 1928, according to economists Emmanuel Saez and Thomas Piketty. Center on Budget and Policy Priorities

There are 43 million people in the U.S. living under the official poverty line. While there are more white people living in poverty (30 million) than Black (10 million) and Hispanic (12 million) poor combined, the poverty rate for whites of 12 percent is significantly less than the 26 percent rate for Blacks and the 25 percent rate for Hispanics. Census

Since the economic recession started, there has been a 25 percent rise in the number of people “doubling up” in housing by moving in with others, there has been a rise in the number of homeless families, and in not one of the 50 states can a person working full time at one minimum wage job afford a two-bedroom apartment for his or her family. National Low Income Housing Coalition

There are an additional 819,000 people in the Reserve and National Guard and another 709,000 civilian personnel. 2011 Census Statistical Abstract, Table 506.

The U.S. spent $774 billion directly on its military budget in 2010. The Department of Defense budget was over $660 billion, counting the special expenditures for Iraq and Afghanistan wars. The Department of Veterans Affairs was $114 billion for 2010.

The U.S. spends much more on its military than any other country in the world. Military spending has increased by 75 percent since the year 2000 and represents about $2,100 for every person in the U.S. Excluding expenditures for veterans, the U.S. military budget in 2009 was over $660 billion. In second place globally was China at about $100 billion. France was third at $63 billion, the UK next with $58 billion and Russia in fifth place spending $53 billion. In fact the U.S. spends more on military than the rest of the top 10 countries in the world put together. SIRI

The U.S. also leads the world in the sale of lethal weapons to others, selling about one of every three weapons worldwide. The USA’s major clients are South Korea, Israel and United Arab Emirates. SIRI

The U.S. continues to hold 174 people in indefinite and illegal detention in Guantanamo despite global calls for closure. Thirty eight of those still being held have won their habeas corpus petitions in front of federal judges but still have not been freed. Miami Herald.

The U.S. continues to launch remote controlled unmanned predator drones into Pakistan, a country we are not even at war with. In 2010, U.S. drones struck Pakistan 118 times killing many civilians. New America Foundation

The number of deaths in the U.S. wars in Iraq and Afghanistan are difficult to calculate since the U.S. only counts U.S. deaths. The U.S. reports 1,277 U.S. military have died in Afghanistan and 4,427 died in Iraq. The Iraq Body Count estimates between 99,357 and 108,475 civilians have died in violence associated with the war in Iraq. www.iraqbodycount.org

Nobel Prize-winning economist Joseph Stiglitz estimates that the total cost of the Iraq war to the U.S. is more than $3 trillion. For this estimate he calculated the actual military costs, the cost of treating and compensating disabled veterans, a $10 increase in the price of oil (the price of oil went from $25 a barrel when the U.S. invaded Iraq to as high as $140 a barrel in 2008), the increase in the federal debt and the borrowing that demanded. Stiglitz

As we celebrate the life of Dr. King, let us realize the challenges that still face those who seek a world of justice and peace. He showed us that anger at injustice can be combined with courage to create real hope for a better world. Let us address the injustices of continuing racism, materialism and militarism with the courage and hope that Dr. King displayed in his brief life.

New America Foundation: “The Year of the Drone: An analysis of U.S. drone strikes in Pakistan, 2004-2011,” http://counterterrorism.newamerica.net/drones

Bill Quigley is legal director at the Center for Constitutional Rights and a law professor at Loyola University New Orleans. He can be reached at quigley77@gmail.com.