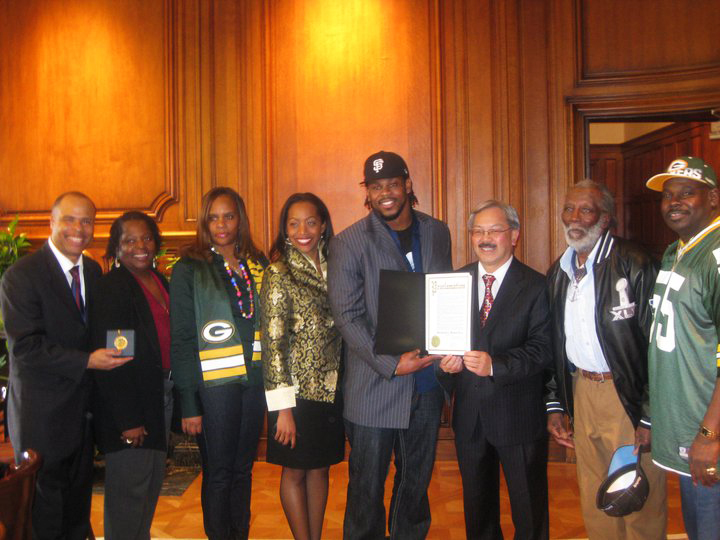 Less than two weeks ago, the Green Bay Packers – the only fan-owned, non-profit franchise in major American sports – won the Super Bowl, bringing the Lombardi trophy back to Wisconsin. But now, past and present members of the “People’s Team” are girding up for one more fight and this time, it’s against their own governor, Scott Walker.

Walker, after the Super Bowl victory, bathed himself sensuously in the team’s triumph, declaring at a public ceremony that February was now Packers Month. He oozed praise for the franchise named in honor of the state’s packing workers. But just days later, the governor offered cutbacks, contempt and even the threat of violence for actual state workers.

Walker has unveiled plans to strip all public workers of collective bargaining rights and dramatically slash the wages and health benefits of every nurse, teacher and state employee. Then, Walker proclaimed that resistance to these moves would be met with a response from the Wisconsin National Guard. Seriously.

Yes, in advance of any debate over his proposal, Gov. Walker put the National Guard on alert by saying that the guard is “prepared” for “whatever the governor, their commander-in-chief, might call for.” Considering that the state of Wisconsin hasn’t called in the National Guard since 1886, these bizarre threats did more than raise eyebrows. They provoked rage.

Walker has unveiled plans to strip all public workers of collective bargaining rights and dramatically slash the wages and health benefits of every nurse, teacher and state employee.

Robin Eckstein, a former Wisconsin National Guard member, told the Huffington Post: “Maybe the new governor doesn’t understand yet – but the National Guard is not his own personal intimidation force to be mobilized to quash political dissent. The Guard is to be used in case of true emergencies and disasters, to help the people of Wisconsin, not to bully political opponents.”

Already this week, as many as 100,000 people have marched at various protests around the state with signs that reflect the current moment like “If Egypt Can Have Democracy, Why Can’t Wisconsin?” “We Want Governors Not Dictators” and the pithy “Hosni” Walker.

“We know that it is teamwork on and off the field that makes the Packers and Wisconsin great. As a publicly owned team, we wouldn’t have been able to win the Super Bowl without the support of our fans. It is the same dedication of our public workers every day that makes Wisconsin run. They are the teachers, nurses and child care workers who take care of us and our families.

As many as 100,000 people have marched at various protests around the state with signs that reflect the current moment like “If Egypt Can Have Democracy, Why Can’t Wisconsin?”

“But now in an unprecedented political attack Gov. Walker is trying to take away their right to have a voice and bargain at work. The right to negotiate wages and benefits is a fundamental underpinning of our middle class. When workers join together, it serves as a check on corporate power and helps ALL workers by raising community standards.

“Wisconsin’s long standing tradition of allowing public sector workers to have a voice on the job has worked for the state since the 1930s. It has created greater consistency in the relationship between labor and management and a shared approach to public work. These public workers are Wisconsin’s champions every single day and we urge the governor and the state Legislature to not take away their rights.”

The players who signed on don’t have quite as high a profile as Super Bowl MVP Aaron Rodgers, but give it time. Rodgers is the Packers’ union representative in negotiations with the NFL, and on Tuesday the players union issued their own statement in support of state workers, writing:

“The NFL Players Association will always support efforts protecting a worker’s right to join a union and collectively bargain. Today, the NFLPA stands in solidarity with its organized labor brothers and sisters in Wisconsin.”

The support of the Packers players hasn’t been lost on those marching in the streets. Aisha Robertson, a public school teacher from Madison, told me: “It’s great to see Packers join the fight against Walker. Their statement of support shows they stand with us. It gives us inspiration and courage to go and fight peacefully for our most basic rights.”

Walker no doubt envisioned conflict when he rolled out his plan to roll over the workers of Wisconsin. But I don’t think he foresaw having to go toe-to-toe with the Green Bay Packers. As we learned in Egypt, envisioning unforeseen consequences is never an autocrat’s strong suit.

As we’re learning in Wisconsin, fighting austerity is not an Egyptian issue or a Middle Eastern issue – it’s a political reality of the 21st century world. And as Scott Walker is learning, messing with cheeseheads can be hazardous to your political health.

Dave Zirin is the author of “Bad Sports: How Owners are Ruining the Games we Love” (Scribner) and just made the new documentary “Not Just a Game.” Receive his column every week by emailing dave@edgeofsports.com. Contact him at edgeofsports@gmail.com. This story first appeared in The Nation.

Class warfare in the U.S. heats up