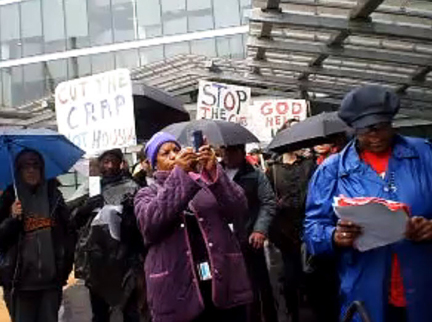 In a not surprising simultaneity, Madison, Wisconsin, burst into mass protests after voters elected Republican Gov. Scott Walker, who reversed his promises to create jobs, blamed falsified budget problems on public employee unions and attempted to strip them of collective bargaining rights.

“Do the Revolutions Sweeping the Arab World Reflect a Tectonic Shift in the Global Balance of People Power?” asks an Al Jazeera headline. Were Americans emboldened by the 18-day Egyptian grassroots leaderless revolution that succeeded in ousting Hosni Mubarak?

Did these revolutions inspire the people of Wisconsin to re-engage with “Fighting Bob” La Follette’s powerful progressive spirit and flood Madison with thousands of protestors? According to Politico, “In an act of intercontinental solidarity,” an Egyptian honored Wisconsin protestors with pizza via Twitter. More free pizzas arrived from Turkey, Korea, Finland, China and Australia.

On Saturday, Feb. 26, Moveon.org organized nationwide emergency protests at statehouses in 50 states “To Save the American Dream.” These rallies strengthen solidarity with Wisconsin and other states protesting cuts to education, police, emergency response, vital human services and Republican tax breaks for corporations and the rich.

On Monday, Feb. 14, San Francisco activist groups launched two Valentine’s Day theme protests in solidarity with each other and groups in cities nationwide.

Approximately 120,000 seniors and more than 90,000 disabled people face a tsunami-like surge in population with an immediate plunge into a bleak future living far below the federal poverty line without income for food, housing or medical care. They’re slammed by a double whammy – Govs. Schwarzenegger’s and Brown’s responses to California’s budget crisis: a $12 billion reduction in state spending on health and social services coupled with San Francisco’s heartbreaking fiscal crisis.

Though the pledges had been pre-delivered on Feb. 2, Groundhog Day, Supervisor Malia Cohen seemed unprepared. District 10 voters are encouraged to call and ask where she stands on this issue. Will Supervisor Cohen stand up for her Bayview constituents – poor, disabled and elders?

Paul Boden described the state’s plan: It creates “800,000 jail cells, jobs for homeland security, the military, the prison industrial complex. Then it turns around and says, ‘We want to cut taxes, so we don’t have any money.’” We’re going to eliminate income support for families, seniors and disabled people; access to health care. We’ll build more jails; hire more state police; support business improvement districts in privatizing security on our public streets. We’ll close our public parks and arrest people that go there to sleep because they don’t have a freakin’ house.

We have a plan, Boden said: Nineteen cities today – next, 50 cities repeating the message: “We demand to be treated like human beings! We’re sick of this! We’re not going to take it any more!”

Our brothers and sisters from Planning for Elders and Senior Action Network should not have to ask, “Do not cut our support services and programs.” Local government should stand up and fight for the communities. They should be marching on the Federal Building. “If they’re not, we will. Let’s go!”

“Poor People are under attack! What do we do? Stand up! Fight back!”

In San Francisco, over 30,000 households wait for 6,000 unavailable public housing units, while 14,000 languish on the closed Section 8 list.

In Oakland and the East Bay during a January 2011 five-day open period, 55,000 households applied to Section 8 wait lists, with 23,000 applying on the first day alone. Fair market rate of $1,377 a month is out of reach of 53 percent of Oakland renters.

In the Oakland-Fremont metro area, 79 percent of low income households suffer severe cost burdens, paying over 30 percent of their income on housing.

WRAP statistics and charts render transparent where the money goes.

In part, WRAP demands that the government:

End wasteful overseas military engagement and fight the war on poverty here. Afghan and Iraq wars get $1 trillion; public housing gets approximately 1 percent of the defense budget, 6 percent of the war on terror budget.

Redistribute federal dollars toward shelter and job creation and away from greedy financial institutions and the wealthy. Eliminate tax deductions for luxury and second homes.

Overturn housing finance deregulations in the 1998 Quality Housing and Work Responsibility Act and QHWRA’s Declaration of Policy, which states: “The Federal Government cannot through its direct action alone provide for the housing of every American citizen, or even a majority of its citizens; Explicitly recognize the human right to housing.”

No one demonstration can produce the desired “ask,” observed Bob Offer-Westort, Coalition on Homelessness community organizer. But, taken together, a series of unified protest actions by large coordinated coalitions – like the “Have A Heart, Save Our Homes” Bay Area group – represent an indomitable force.

Egyptian demonstrations toppled a dictator with the combined the might of desperate youth communities, general populations with nothing to lose and functionally organized unions. Rolling Middle East demonstrations reverberated their inspirational power across the globe, igniting firestorms as distant as Wisconsin and San Francisco.

Bob noted that union actions function differently from popular and community protests. Unions have clout through group strength and the threat to deny employers services.

Populations, like poor people, elders and disabled adults and communities of color, though they generally cannot withhold services, derive power from collective action, intelligent strategy and moral authority. Not only can clever use of moral authority bring issues to an ignorant public, it can expose to public conscience the hidden agenda of a power-abuser like Hosni Mubarak and his Western supporters.

Smart implementation of moral authority can flush power brokers into the spotlight where, if they say “No,” they appear unreasonable. By insisting city supervisors sign a pledge to support senior services, James Chionsini’s Healthcare Action Team achieved exactly that.

James remarked, “Now we know who our allies are. We (went) there with seniors and people with disabilities to assess who our outspoken allies are.” Who’ll “sing and stand with us?” or “give us a political run-around?”

David Campos should “be given props,” he said, for being “the only supervisor to come out, stand with us and meet the seniors.”

James described Malia Cohen’s hesitation “to come out of the office and talk to us. Maybe she’s a freshman supervisor who doesn’t know” or was “worried … because it was so raucous. We are giving her the benefit of the doubt.”

James urged District 10’s low income residents “to call her office post-haste. People have a right to know where she stands” on critical issues of affordable housing and redevelopment.

Chionsini, past Bayview resident, moved back in July 2010. “I’m seeing fewer African-American people, poor people – more people like me showing up, not longtime Bay View residents.” He predicted “a massive wave” of “people paying market rate” “about to wash out people that are poor or don’t own their homes. C’mon. Get some regular people in there that are going to be part of the community” and not just “a bunch of wealthy white yuppies.”

“Is she (Supervisor Cohen) going to fight for Lennar?” “Is it market rate or food on the plate?” he asked.

“We’ll be back,” chanted the HAT team.

A longtime Bay Area activist summed up the protests: “We are building a movement to actually take back what is rightfully ours as human beings. We have a government, a system that is owned by the corporations. We can vote, but they can buy the elections, and they are doing it in their own interest, which is to profit.

“It’s a war on the poor, and people aren’t going to take that passively. So we’re building a movement here. We demand a system where housing is a right not just something we beg for. This is putting this into action. That’s not just begging.”