Imperialists and their allies escalate attacks against Libya, Ivory Coast, Sudan and Zimbabwe 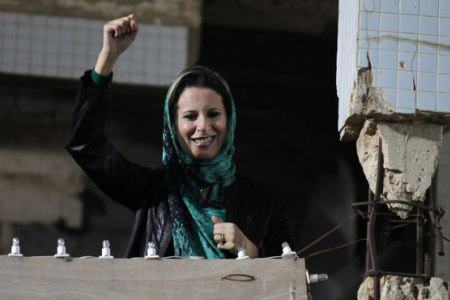 United States, United Nations and NATO military forces have intensified the implementation of policies aimed at total economic domination and regime-change for those states which resist interference in their internal affairs. As Africa becomes even more of a major source for the exploitation of oil, strategic minerals and agricultural commodities, the continent will be under increasing pressure from the Western capitalist countries.

These military attacks against African states are accelerating at a time when the capitalist governments in Western Europe and North America continue to tout the belief that the recovery from the global recession is well underway. Nonetheless, a recent International Monetary Fund (IMF) forecast indicates that the imperialist states are still very concerned about the future stability of the world markets.

A World Economic Outlook from the IMF reports: “Among the challenges are rising oil prices, unrest in the Middle East, continued inflation in China and debt problems in Europe. The recovery has solidified, but the unemployment remains high.” (BBC News, April 11)

Fears related to the cutoff of oil supplies, unrest in North Africa and the Middle East, the gloomy economic picture facing Portugal, Greece, Spain and the Irish Republic are cited specifically by the IMF. The various countries in Africa that have been targeted for destabilization and regime-change are large scale producers of oil and other valuable resources and commodities.

Since March 19, the United States and other imperialist states under the ostensible control of NATO have been carrying out a bombing campaign against the North African state of Libya. These airstrikes and cruise missile attacks have pounded the capital of Tripoli as well as other cities throughout the country. 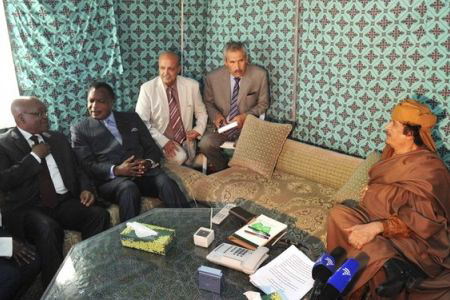 On April 10, the African Union sent several heads-of-state, a foreign minister and the commission chair to begin a mediation process to end the conflict in Libya. The AU delegation consisted of President Jacob Zuma of South Africa, Denis Sassou-Nguesso of Congo-Brazzaville, Jean Ping of the African Union as well as the foreign minister of Uganda and President Mohamed Ould Abdel Aziz of Mauritania.

In meetings with Libyan leader Muammar Gaddafi, the government accepted the peace proposal put forward by the AU. The proposal called for “the immediate cessation of all hostilities, the cooperation of the concerned Libyan authorities to facilitate the diligent delivery of humanitarian assistance to the needy populations, the protection of foreign nationals, including African migrant workers living in Libya, and dialogue between the Libyan parties and the establishment of an inclusive transition period.” (AU Press Release, April 10)

The AU delegation then traveled on April 11 to Benghazi to meet with the Transitional National Council, which represents the opposition rebel forces. The leadership of the TNC rejected outright the peace proposal from the AU in addition to ruling out any solution short of regime-change in Libya. 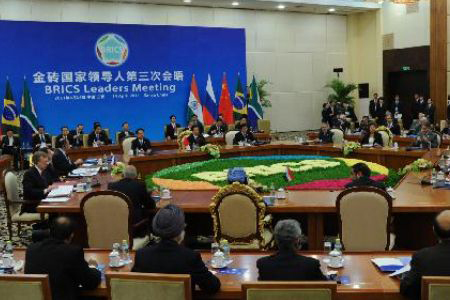 This is not the first time that peace proposals have been rejected by the rebels and their supporters in the U.S. and Western Europe. Latin American states under the leadership of Venezuelan President Hugo Chavez made overtures prior to the U.S.-NATO bombings to work towards a ceasefire, but the efforts were rejected by the imperialists and the rebels.

On March 11, the AU Peace and Security Council issued an earlier communiqué calling for a ceasefire and opposing foreign military intervention. This proposal was also dismissed by the Western states now bombing Libya and the rebel forces.

The Obama administration has demanded that the Libyan government be toppled. U.S. military attacks on Libya and its ongoing naval blockade of the North African state has been condemned by progressive forces within the peace movement and the oppressed communities inside the country. Internationally, opposition to the U.S.-NATO bombing has increased on a daily basis with demonstrations against the war taking place in Egypt, Mali, Greece, Serbia, Canada and other countries.

An Associated Press news report said on April 11 that “the military intervention in Libya cost the U.S. an extra $608 million in the first few weeks of the operation. Officials call it extra costs because it doesn’t include complete spending, such as paychecks for U.S. sailors, airmen and other forces, who would have been deployed somewhere in the world anyway.” (AP)

Another source of instability in Africa is the world’s largest cocoa-producing West African state of Ivory Coast, where the former colonial power of France in conjunction with the U.N., have toppled incumbent President Laurent Gbagbo, arrested him and installed his rival, the Western-backed Alassane Ouattara. This conflict in Ivory Coast stemmed from a dispute over a run-off election in November 2010 where the imperialist states backed the candidacy of Ouattara. 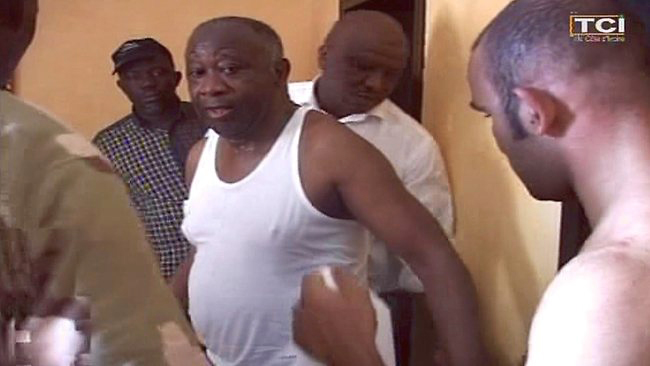 Gbagbo insisted that he won the elections and that the decision by the Ivorian Supreme Court upholding his position nullified the claims made by U.N. observers and the national electoral commission. On March 31, French and United Nations military forces accompanied by gendarmes under the control of Ouattara launched an offensive against positions held by military units remaining loyal to incumbent President Gbagbo.

France and the U.N. used heavy artillery, helicopters and airstrikes to attack the Gbagbo forces. During the period of the siege on the presidential palace in the capital of Abidjan, two massacres were carried out inside the country.

At Duekoue it has been reported that up to 1,000 people may have been killed. Although supporters of Ouattara have been accused of the massacre, the U.N. has attempted to also apportion partial blame on the Gbagbo forces. Nonetheless, all of the victims were said to be have been traditional supporters of incumbent President Gbagbo.

Later on April 7, U.N. High Commissioner for Human Rights spokesman Rupert Colville said that 40 bodies were found in Blolequin. The culpability for these massacres will undoubtedly be investigated by independent journalists in the weeks to come.

The French and U.N. involvement in both the attempts to topple the Libyan government as well as the overthrow and arrest of Ivorian incumbent Gbagbo represents the increasingly aggressive military posture of Paris on the African continent. Although the French said that the arrest of Laurent Gbagbo was done by the Ouattara forces in Ivory Coast, initial reports indicated that special forces from the European country led the assault on his residence and seized him.

The Sudanese government has blamed the Israeli Defense Forces for the bombing of a vehicle where two people were killed on April 5. According to reports from people around Port Sudan: “We heard three loud explosions. We went outside to see what was happening and eye witnesses told us they saw two helicopters which looked like Apaches flying past.” (Sudan Tribune, April 5)

This attack follows a similar strike that occurred in early 2009 when in Eastern Sudan the IDF used fighter jets against a convoy of vehicles resulting in the reported deaths of 119 people. The Sudan Tribune said of the current attack on April 4 that “a foreign plane launched the attack in an area known as Kalaneeb, which was described as 14 kilometers away from the coastal city of Port Sudan and on the main road leading to the regional airport.” (Sudan Tribune, April 5)

The state of Israel failed to acknowledge or deny their involvement in the attack. Israel has accused Sudan of transporting weapons from Iran to the Hamas government in Gaza. Sudan has denied these allegations.

In the Southern African nation of Zimbabwe, the ruling Zimbabwe African National Union-PF and the government in Harare has embarked upon a campaign to collect signatures calling for the removal of Western economic sanctions against the country. The sanctions were leveled in the aftermath of the adoption of a radical land redistribution program in 2000 that took control of large tracts of territory seized by British settler-colonialists during the latter years of the 19th century.

Although the Zimbabwe government under the leadership of President Robert Mugabe has established a coalition with the opposition Movement for Democratic Change factions, the United States, Britain, Australia and the European Union have maintained the economic sanctions against the country. The Zimbabwe government is currently preparing for national elections in the aftermath of the drafting of a new constitution.

In an editorial recently published in the state-controlled Zimbabwe Herald newspaper, the ruling ZANU-PF party of President Mugabe said: “The Western hysterical expression about saving civilians in Libya must be dismissed with the contempt it deserves. The civilians of Libya do not matter as their oil does.” (Zimbabwe Herald, April 6)

This same editorial continues by noting: “What Barack Obama has done in fact is to sign an assassination order for Muammar Gaddafi, and his desire may as well come to materialize as did that of his predecessor, George W. Bush, who pursued Saddam Hussein to the gallows. But Obama only sings humanitarian songs for civilians belonging to countries ruled by leaders that prevent the U.S. from imperially dominating their natural resources, such as the civilians in Libya, Zimbabwe, North Korea, Iran and Venezuela.”

Role of the anti-war movement in the United States

The recent April 9-10 anti-war demonstrations in New York and San Francisco represent the strengthening of the movement for peace and social justice inside the U.S. With the increasing attacks on labor, the poor and the oppressed by the bankers and their backers in government, it will become increasingly important for people inside the country to draw links between the worsening conditions of the workers and its relationship to the ever-rising Pentagon budget. 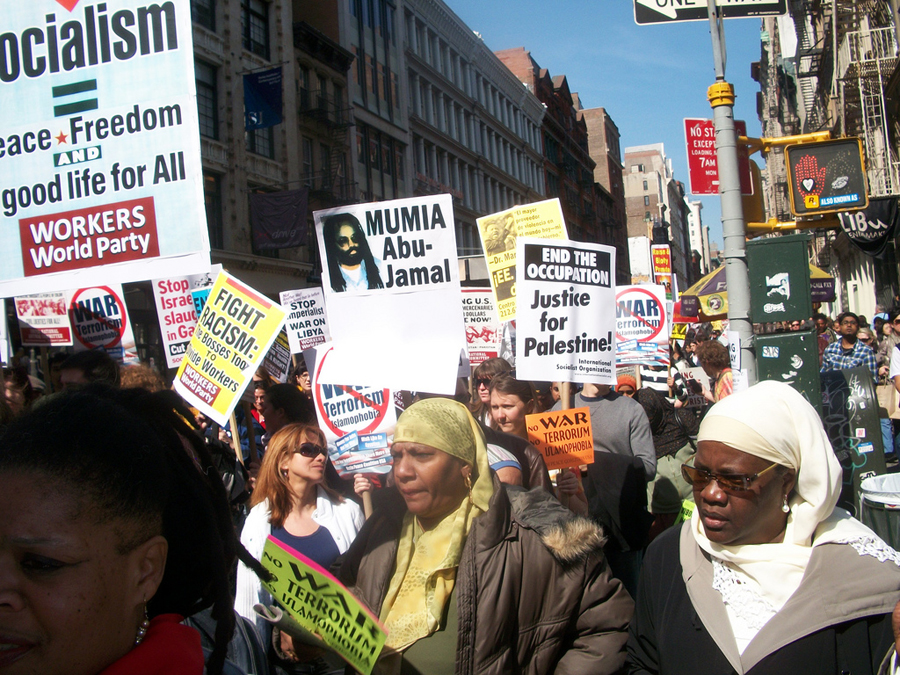 In North Africa and the Middle East, the masses have engaged in mass demonstrations, strikes and rebellions against the ravages of world capitalism and its economic crisis. The struggles of workers in Wisconsin and other states in the U.S. have gained inspiration from the people of Egypt, Tunisia, Yemen and Bahrain.

This year’s May Day will also take on added significance by providing an opportunity for these linkages of the worldwide struggles against capitalism and imperialism to be raised to thousands of workers in cities across the country. It will be the unity of program and action of the workers and oppressed across the globe that will end the exploitative systems and create the conditions for world peace and social justice for the majority of humanity.

Editor’s note: Recent interviews with Abayomi Azikiwe on Libya include “Gaddafi accepts ceasefire roadmap” and “US to use al-Qaeda as allies in Libya” on Press TV.