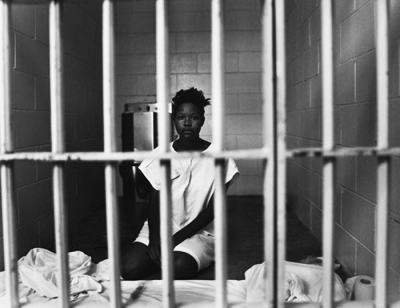 On Friday, May 13, 7-9 p.m., at the Eastside Arts Alliance in Oakland, the California Coalition for Women Prisoners will host a screening of “Juvies” (directed by Leslie Neale, 66 minutes, USA, 2004), a film about youth tried as adults and serving outrageously long sentences.

The California Coalition for Women Prisoners regularly visits young women and trans folk sentenced as adults for crimes they were involved in before they were 18. Some of them are sentenced to life without the possibility of parole (LWOP).

From inside, one woman sentenced as a juvenile writes, “This place does it to you. You lose hope and patience. You fight so hard to not lose yourself in this place, it’s disgusting.”

Several CCWP visits with women prisoners are featured in the film “Juvies.” Others are eager that their stories be heard, too. CCWP has developed this event in collaboration with women organizing inside prisons in California, and the evening will include some of their writing.

Another woman from inside writes: “I’ve been in and out of trouble since I was 12 years old so I know what it’s like to be busted at such a young age. At first we say it’s nothing, I can do this. If this ain’t your first rodeo, it’s easier because you start to familiarize yourself with wasting away.”

From San Francisco and the East Bay, CCWP volunteers travel to women’s prisons to provide legal advocacy support and to sit, for a short while, with these young women and trans people to reflect on our lives together. Some belong to a self-organized group inside of prison, the Juvenile Offenders Committee, which recently organized to fight for the opportunity for people who did not finish high school to take the GED and earn a recognized degree.

One woman we visit tells us about her job picking up trash on the yard for pennies an hour and how she’d like to wear a long camel hair coat when she gets out; another that she wants to have a child; another speaks of her worries for her young daughter outside the walls. They are all sentenced to LWOP.

“Any sort of life sentence to youth is morally wrong. You rob them of hope. How can you say someone so young can’t be rehabilitated!” exclaimed a young person sentenced as a juvenile.

Ironically, although crimes against children are universally regarded as heinous, the United States engages in state-sanctioned child abuse by sentencing some of them to life in prison without the possibility of parole. The United States is the only country in the world where youth can receive a LWOP sentence, which means no hope of release from prison in their lifetime.

The United States is the only country in the world where youth can receive a LWOP sentence, which means no hope of release from prison in their lifetime.

Youth are targeted by “tough on crime” laws which hold them to the same standard as adults, although it has been demonstrated that teenagers are still maturing and cannot reasonably be treated the same as adults. This practice is in strict violation of international human rights law and represents a severe lack of compassion – a lack consistent throughout this country’s history. Since the majority of the young people with LWOP sentences are youth of color, this also duplicates the pattern of racism which pervades the entire criminal legal system.

Groups like the Youth Justice Coalition in Los Angeles, Californians United for a Responsible Budget and Human Rights Watch, together with a broad number of organizations, continue to challenge and pressure lawmakers. In December 2010, Sen. Leland Yee introduced SB 9, a bill which would make it possible for young people sentenced to LWOP as juveniles to request after 10 years of incarceration a review of the crime they were involved in and their conduct in prison. If found eligible following the review, they could be resentenced to 25 years to life.

This bill is similar to SB 399 which, shockingly, was defeated last August by two votes. SB 9 is being heard in the Senate Appropriations Committee on Monday, May 2, and then hopefully will go before the Senate for a full vote.

However, SB 9, like SB 399, does not address the core injustice of juvenile LWOP, and it has many serious limitations. If LWOP youth are resentenced, they only go before the Board of Parole Hearings after 14 years to present their case for suitability for release. This is a Board that currently finds only 14 percent of the prisoners who are eligible suitable for parole. Even the majority of those found suitable are reversed by the governor. Although the bill is a only a small step in the right direction, it is unconscionable for it not to pass yet again!

The young lifers whom CCWP works with are urging everyone to campaign for its passage and have actively taken part in organizing for its existence. Together with these young lifers, we hope the film will bring greater awareness of the severe sentencing of youth and some of the problems inherent in the juvenile injustice system.

The film will be followed by a moderated discussion where community groups, youth organizers, formerly incarcerated community members and local activists can reflect and share strategies that continue to challenge the criminalization of youth, particularly youth of color, and learn about the recent SB9 legislation. There will be updates on current youth justice campaigns and opportunities to connect with ongoing actions, and join the fight.

An organizer inside urges us to help: “I ask you to please get involved in ending this draconian sentence of youth LWOP. Support SB 9, have family and friends write letters to the legislature telling them that SB 9 is a bill that offers youth a second chance they deserve.”

The May 13 screening of “Juvies” is 7-9 p.m. and is free, wheelchair accessible and open to the public. Eastside Arts Alliance is at 2277 International Boulevard in Oakland. Please join us!

If you are unable to attend, you can still help with this campaign. Go to www.fairsentencingforyouth.org to find out how your legislators voted and how to write a support letter and follow the bill. Postcards will be available at the event to send to women and trans people organizing around this issue inside.

Learn more and get involved with the California Coalition for Women Prisoners at www.womenprisoners.org.