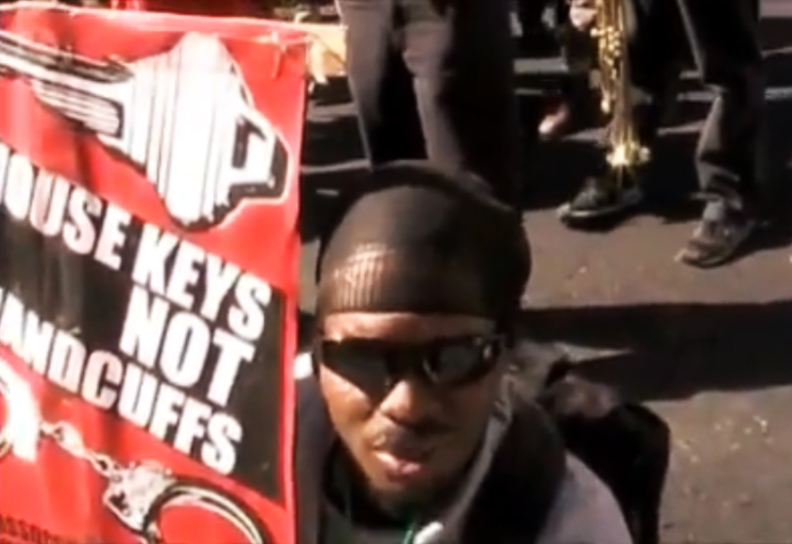 The occupation of the 20th and Mission site, housing an empty T-Mobile store below and a former SRO above, was the longest to date by any activist group.

Last year on July 22, 2010, Stop the Cuts Bay Area, loosely affiliated with Homes Not Jails, coordinated a closed occupation at the same 20th and Mission site. From inside the building, squatters hailed through the windows a large group that remained in the street below.

This year, the takeover lasted longer and the public was invited inside.

Inspired by their successful April 11, 2011, Kaiser-Permanente open occupation, Homes Not Jails led the public through the Sierra’s rooms and halls and up to the roof.

Homes Not Jails (HNJ) is a collective taking daily direct action against forced homelessness by locating squats for unhoused people. The group, however, is known more widely for engaging in public takeovers of empty properties, thus focusing attention on the masses of San Franciscans evicted for profit and forced to live outside.

“It’s obscene and unacceptable,” said HNJ member and unapologetic squatter Matt Crain. “In San Francisco currently, there are more than three times as many vacant housing units as there are folks experiencing homelessness.”

The city’s homeless population has been estimated at 7,000 to 10,000 people. Yet San Francisco landlords left 32,000 housing units vacant, mostly to profit from tax credits.

By 2005 estimates, 1 billion people worldwide lived in squatted homes and shantytowns. For years, squats have been legal in Europe, notably England and the Netherlands, but not in the U.S. and not in San Francisco.

This rally and march was connected to “An International Celebration of Autonomy and Integrity,” with simultaneous actions planned for Amsterdam, Budapest, Vienna, and Malaga, Spain.

Believing housing is a human right, HNJ urged San Franciscans to participate in this and future displays of respect for individual freedom and autonomy from the state. They called every citizen to “embrace the need for collective empowerment, equitable communities and mutual aid.”

Then the Brass Liberation Orchestra led a spirited march to the Sierra Hotel at 20th and Mission where HNJ conducted tours. About 250 visitors were guided or walked through the building.

Should you get involved in a takeover?

Then, take it back.

Today, people under 40ish worldwide are tired of helplessness. They’re taking everything back. The poor are so desperate in the Middle East – Egypt, Yemen, Syria – they are willing to die. They covet the bit of democracy we in America still appear to possess.

Housing activists are forceful and adamant. A red and black sign leaning against a wall under a window in the Sierra Hotel ordered, “Make affordable housing, or we will!”

Paul Boden of the Western Regional Advocacy Project bull horned to the crowd at the Sierra Hotel squat, “[They] want us killing ourselves.”

They want us isolated, separated, at odds. Because our sense of community dissolves their attempt to “divide and conquer,” collective action is their enemy.

“We ain’t killing each other,” said Paul. “We are uniting. We are fighting back. And that’s the only way we will win.”

According to Matt Crain, a takeover is intended “to allow as many people as possible to share in a collective experience.” Activists believe that connecting is the powerful antidote to the Republican message: Stay alone in your homes, hunker down, be afraid, don’t get together, everything for yourself, every man for himself, just put your head down and try to survive.

Getting involved is something you can do

Research reveals the antidote to depression and helplessness. Start anywhere. Do something. Get active. 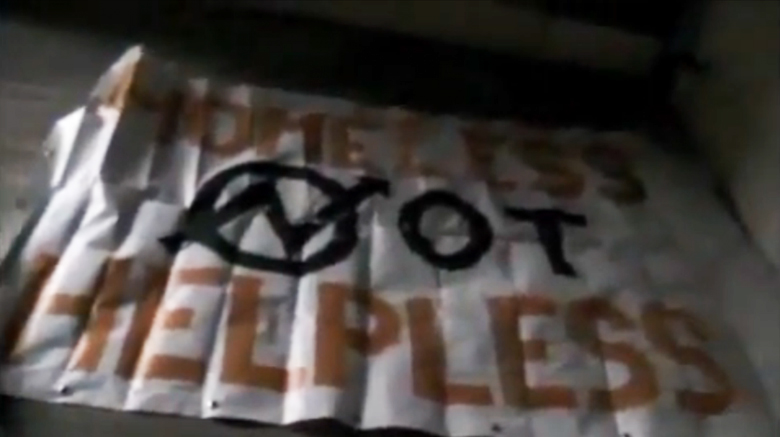 If you feel paralyzed, hopeless or alone, participating in a takeover is powerful. It’s not just a futile waste of your time or a crowd on a street corner yelling.

Buildings are occupied by groups working in concert to create a sea change. Banding together, albeit temporarily, you reclaim stolen property. Jeremy Miller called the Sierra “our new home,” where, for a night, we restored rightful ownership.

Squats are old as San Francisco. There are experts who do it safely.

Organizers research. Over time, they learn to locate empty buildings, get inside and stay.

In a takeover, cell phones are on constant alert to conditions inside and outside the building. “We try to communicate and stay in touch and pay attention to anything that’s going on,” said Matt.

If you stay the night, sometimes police may enter and evict you – especially if the landlord provided papers before the opening of business at 9 a.m. But occupations are conducted on evenings or weekends, while owners are off the clock. Most times, occupiers leave safely when warned of imminent police arrival.

Everyone can play a role

At his or her chosen level of involvement, participants can work at various safety levels. Matt stated: “Every time there is a direct action, there are roles to play for everyone. Whatever your risk level is, whatever you’re able, there’s always room for everyone to be involved.”

Crowd size matters, so come and flesh it out. Stand around, kibitz, watch and sing. Speak on the open mike. Be a part of it.

It’s fun. The entertainment is great. The Brass Liberation Orchestra, Tommi Mecca, the homeless people and the rap artist at the Sierra takeover were excellent performers. Poets like Dee Allen and Lisa “Tiny” Gray-Garcia have professional heart.

The speakers are interesting. You’ll learn things you didn’t know. They’ll make you think and feel. They will inspire you.

Bring your cell phone or camera. Matt encouraged a woman from the Haight when she told him she wanted to take sideline photographs as an official witness.

Cameras are invaluable. At the Sierra Hotel doorway, at least six on-scene photojournalists and videographers documented an unprovoked SFPD assault by a male officer on a young man. The victim, who asked police a question, was cited for obstruction of an officer and resisting arrest. SFPD then released him. He is currently seeking legal counsel.

Such clashes at takeover sites are rare. Matt Crain observed that, in a 17-hour peaceful “open house,” there was a short 20 minute disturbance. Immediately after the incident, the officer in charge directed all police cars to vacate the area.

Occupiers remained on the open site for 14 more hours. They were awakened at 9:45 a.m. by the station commander who ordered them out. Though he did not present the requisite papers signed by the owners, they chose to comply. Food Not Bombs then fed them a delicious breakfast of oatmeal and strawberries.

Safety at an open occupation

Organizers recognize the limited risk of police harassment and arrest.

Depending on the individual and the situation, arrest can be a badge of honor, a minor hassle or a danger. Tickets clog the system and are often dropped.

Meticulous planning protects squatters. Advance “researchers” investigate sites for security: entrances, exits, windows, escape routes. Sometimes areas are barricaded. The idea is to stay in the building as long as you can.

I feel safe walking around and through occupation sites. I avoid potential problems by standing away from police. As a journalist, I have a right to video, film and ask questions. I do this several feet back, projecting my voice. I keep my camera ready.

Because the police don’t have the legal right to kick you out until they get a notice from the owner, it’s safe to stay inside, have fun and talk. Visitors even skateboarded and biked through Sierra Hotel halls and on the roof. Occupiers are working on a plan to undermine the mechanism of arrest.

According to the founding fathers’ constitutional blueprint, we are the connected safety net that “provides for the general welfare.” Come and see where, if Americans put humanity before property, the homeless people you pass on the street every day could have lives and futures. Every level of shared participation helps redress this injustice by restoring this country, this democracy, this world.

Help make a strong statement, “We will take this back.” Join with others who are fed up having it all taken away.

War on Terror? US proxies Ethiopia and Rwanda terrorize their own people

A conversation with the MOI JR, author of ‘Block Reportin’’

Libya, getting it right: a revolutionary pan-African perspective

Boys to Eagles: an interview with Jesus El

Power to the people: A welcome prison victory in Ohio

One year after Haiti earthquake, corporations profit while people suffer