This summer I taught an English class – Literature. It was a six week, 7:30-10:20 a.m. class which met Monday-Thursday. It was a great experience for me and I hope for the students, which nonetheless leaves me exhausted mentally with grades to turn in the first week in August, the first week of Ramadan as well. 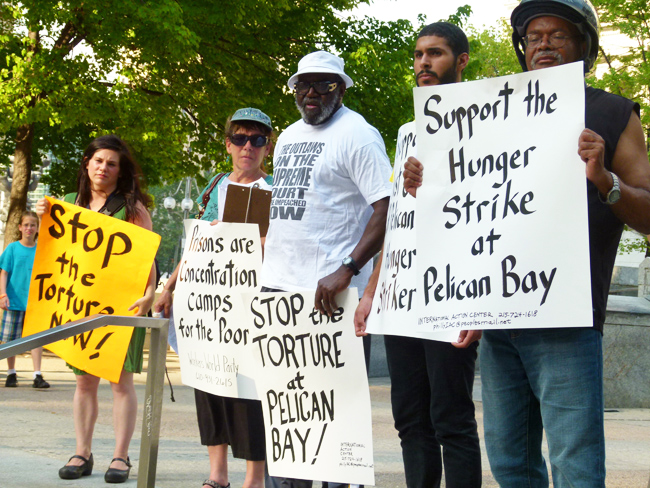 How well indeed the creator saw fit to have the Muslim population worldwide join the hunger strike started by brothers in the Security Housing Unit (SHU) at Pelican Bay July 1, which continues in other California prisons, including I heard at the Central California Women’s Facility (CCWF). Our Sister-to-Sister team was to visit the women July 29, but at the last minute, as on the day before, the prison cancelled our visit.

The prison said our visits, which are legal advocacy visits, are too social, that we spend too much money on the women, whom we buy lunch for from concessions – $10 each. Most of the women we see, the leaders behind bars, don’t get visits from family or friends, so most have not had an opportunity to have a pizza or fresh strawberries, a burger or stir-fried vegetables with chicken, just a few of the entries available in the visiting area.

Perhaps the fact that we hug the women, listen attentively to their stories and then try to match their needs with services – a task which the California Coalition for Women Prisoners (CCWP) is sorely understaffed to meet, is what really disturbs the prison authorities. But we keep soldiering on with the hope that more people, especially attorneys, will volunteer for the California Habeas Project and join Legal Services for Prisoners with Children and the California Coalition for Women Prisoners and get involved. Visit www.womenprisoners.org.

I think at this point that the idea of connection and being connected is a conscious act. This idea was reinforced when I saw a film recently, Tiffany Shlain’s “Connected, An Autobiography about Love, Death and Technology,” where Shlain shows scientifically and humorously the human need to be with other people and how underutilized this potential is. Why aren’t we maximizing that desire, which is pleasurable – this need to connect, to make the world better?

I love the idea that natural highs – a high not chemically induced – is natural to those who are connected and connecting regularly. How many Facebook friends do you have? How many tweeters do you follow?

The other work that reinforces the importance of connection is “The Dislocation Express,” performed by AXIS Dance Company and Dandelion Dance Company, three acts in public spaces beginning in Berkeley at the Ed Roberts Center then traveling to the Walnut Creek or Powell Street BART Stations for the next Act – the ride itself a part of the performance July 24-30.

Location is a place where one feels centered or present. Its opposite, dislocation, is a place where one is absent, even if one has a physical presence. What is real is whatever one thinks is real – reality mutable. If we don’t acknowledge it, is the forest really empty? Timber stacked neatly in front of someone else’s fireplace?

There was no printed program at the first performance, but a navigator gave us a synopsis about what to expect. Some people were sitting on the ground in a circle – a chain marked its edges; others were seated in chairs and then there were a few non-actors like myself standing.

A Berkeley late afternoon in late July meant the weather was warm, not cool, though that might have changed once the sun, declining as we waited, disappeared. In the center of the circle, a woman in a wheelchair sat. Two other actors stood next to her. One held an umbrella – more for show or perhaps to shield her mistress from the sun?

Musicians played as we waited for the performance to start. Various actors set positioned props – metal washtubs and other metal gardening type containers. Pendulums were also positioned at intervals along the interior edge or perimeter of the large circle. There was a violinist, a guitarist, a narrator and a chorus – one who danced as well. The cast would move in and out of the stage.

The story is of a woman who felt dislocated, disconnected, distanced and alone when in fact she was surrounded by a huge cast of characters. Perhaps they weren’t who she was looking for?

Each cast member in his or her way tried to help the character see them. She in turn would speed up and try to leave them behind her. She was running away and crashing into herself at the same time.

Act 1 seemed to be a failed attempt to connect. Act II, which I saw the almost a week later in Walnut Creek, was more character driven – more dialogue, less dance, less music – the distance between the performers and the audience a huge variable. I wonder if the idea was the physically disconnect and budding connections?

On the BART train leaving Ashby on its way to Walnut Creek, it was a fun people watching as dancers, some in wheelchairs, performed along with passengers. Does connection count when the audience is captive? Later on next to the station once we were again in a theater space – a ritual created just outside the entrance where people connected a little better. Connection seems to last when it isn’t forced. Listen to an interview with the artistic directors on wandaspicks.asmnetwork.org (July 27).

So if life is a train ride – its length the track we are on – then to reach one’s destination we have to take those necessary steps to get connected and stay connected before we look up and all those we hold dear and all those we hold close and in awe are gone. I am thinking about Sister Captain Gloria 3X, later Deputy Sheriff Karimah Ali, who made her transition July 2, 2011, a month after Brother Geronimo ji Jaga made his ascension, June 2, 2011, and Brother Nazim Hakim Ahmad, whose services were June 30, 2011. He was one of the founders of San Francisco Juneteenth Festival.

This past month was really heavy personally and I am so happy that Ramadan is here and I am free to go deep and go purposely forward in a way that gathers the fragments into something a bit more solid, so I can get and stay more connected both physically and emotionally and spiritually to those people and ideas that keep me centered and alive.

We had a Muslim Unity in the Community ANWF weekend July 16, and with Geronimo’s commemorations at Eastside and deFremery – well I missed Dr. DeGruy and Randall Robinson. It was so wonderful to see my elders, some pushing 90 and 90-plus at deFremery speak about Al Islam and why it is their chosen path. I am still flowing. The following week there were two events, one a Family Run Walk at the San Leandro Marina and a Unity Dinner in Fruitvale with the Latino community.

I am reading a book, “Children of Fire: A History of African Americans,” by Thomas C. Holt. It isn’t a fast read and I have had to reread parts of the book read while I was tired. When I saw the reference to the Jaga people – Geronimo’s name – I had to smile. And the way he tells the story of the Maafa is certainly a twist on the story I was not aware of. He starts with the first 20 Africans’ arrival in Jamestown in 1619 and then shows us what historic events precipitated their arrival. Fascinating.

Aug. 4-7 is the National Brotherhood of Cyclists Conference at the Marriott Hotel, Oakland. For registration, visit http://www.thenbc.org/. Listen to an interview with conference organizers Pat Baxter and Douglas Milton July 15 on www.wandaspicks.asmnetwork.org.

TaSin Sabir’s exhibit, “Visual Word: Poetry through Photography,” is up at the Joyce Gordon Gallery in downtown Oakland through Aug. 29. Keep your eyes open for a Maafa Hurricane Katrina-Gulf Region Poetry Reading, Fundraiser and Update and program Aug. 29; we are thinking about a closing event at Joyce Gordon Gallery, but it’s not yet confirmed.

The Siddis or African Indian Quilting exhibit, curated by Drs. Henry John Drewal and Sarah Kahn, at MoAD is phenomenal. Visit www.moadsf.org – don’t miss it. And Stanford’s Cantor Art Museum is opening its African Galleries this month. Kevin Epps’ “The Black Rock” screens Friday, Aug. 12, 7 p.m., at the deYoung Museum’s Koret Auditorium in Golden Gate Park. Free tickets will be distributed in front of the theater at 6 p.m. while they last. Seating is limited and first come, first served.