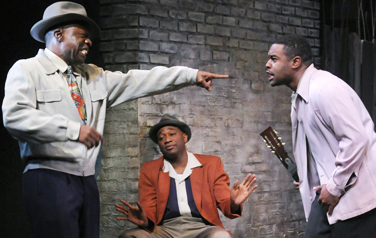 Tuesday, Aug. 16, 2011, was the opening of August Wilson’s play, “Seven Guitars,” directed by Kent Gash, at the Marin Theatre Company. I hadn’t seen the play in about 15 years. Wilson was alive then and he was work-shopping his latest – play five in the eventual 10-play cycle – at ACT-SF with the Lorraine Hansberry Theatre in a co-production.

At that time, Steven Anthony Jones, now artistic director of LHT, played King Hedley. After so long an intermission, MTC’s “Seven Guitars” felt like a new play. I am so happy Wilson’s Century is in a bound set, so I can easily read my way through “Seven Guitars,” which I liked for its opening scene, the repast after a funeral.

Its themes are so timely. I didn’t recall all the Garvey references or the references to Jim Crow and Black on Black violence as a result of the impotence Black men feel regarding their inability to change their circumstances. It is a violent play, not just physically: “Seven Guitars” suggests a spiritual violence carried like an unborn child, that is, violence as a part of the umbilical fluid.

There are also lots of symbols and rituals as well as roosters losing their heads on stage in what looks a lot like a blood sacrifice, not to mention the cages of chickens and the white eggs. Ife is in the house, feathers flying and chickens frying – all the chicken sandwiches one can eat. MTC should think about adding that fare to the snack bar menu for the extended run of the play. I’m sure they’d sell out.

I don’t know to whom the rooster is sacrificed or to what end, unless it is to wealth and prosperity. If this is the God then, as with all things, there is a price. Does Floyd trade or sell his soul to the devil? What is wrong with wanting to do better economically? Why must prosperity threaten Black lives?

There is a prayer said, medicinal herbs planted – Golden Seal, a great antibiotic. There is a tension between folk medicine or herbal remedies and drugs. Actress Margo Hall’s character Louise extols the virtues of modernity, from medicine to alarm clocks. She says, “Away with the golden seal and roosters,” and suggests her neighbor Hedley, actor Charles Branklyn, go to the sanitarium because “they are letting Black people in now – to cure TB.”

The pros and cons are connected to weaponry: Knives vs. pistols are also discussed by actor L. Peter Callendar’s character, Red Carter, who favors a pistol to actor Marc Damon Johnson’s Canewell, who prefers a knife. The two worlds cannot exist side by side; rather, one has to dominate or cast the other out. Red pours libations to the dead before drinking from his friend’s flask and there is a pregnant virgin, a man, instead of a woman. He doesn’t know her state and accepts the child she is carrying as his own.

I remember someone saying they are wearing their shoes backward; but in the midst of all these tangled weeds, the friends have time to dance and sing, dress up and go to the club, play cards and have a good time. Darkness is balanced by light.

August Wilson’s “Seven Guitars” is seeped with themes from the Black Holocaust or Maafa. There is a sense of blindness here, the kind where, like Oedipus, we put out our own eyes or vision because we don’t want to see, not because we can’t. 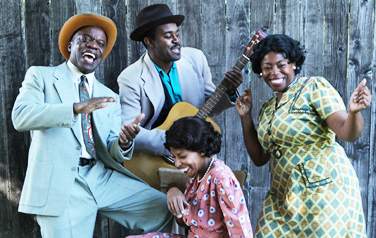 Actor Tobie Windham’s character, Floyd “Schoolboy” Barton, the story’s protagonist, is a young man who can’t read but is full of life and dreams. Floyd is destined for tragedy, perhaps because he is so gifted, because he is such a treasure. The King Hedley character warns him or warns us, but no one saves Floyd. Is the message here that our bold bright children in harm’s way cannot be saved, even when we have a running start?

Floyd doesn’t listen and ignores warning signs, but then I think the character Floyd, the way Windham plays him, is also innocent and vulnerable. Kids don’t listen to elders. Floyd is no exception. The youth have to fall down a few times first. The only problem is that for most young Black men, once they fall, they don’t rise again.

When there is racism, the rules are fluid and unclear. How can Floyd know from moment to moment how to avoid society’s traps, yet as he sidesteps the visible holes, it isn’t the expected enemy that gets him in the end. It is one of his own.

“Seven Guitars” also speaks to trust: how Black people do not necessarily trust each other, nor automatically understand the value of such trust. Guns are pulled on friends. Friends kill each other in drunken brawls. Blood is always so close to the surface.

In the end, it covers everything.

I wonder if Linda Tillery, musical director, developed her score with this in mind. There are moments in the work when the music enhances the story: I recall a time when the stage went dark and we heard a harmonica cry. Occasionally the lights play visually with the music going from dim to full stage to spotlights to cascading or rolling lights. The mood created by these two devices is often a visual or aural foreshadowing or enhancement of the action on stage.

Love is a theme as well here. The seven strings play each other as they play with each other: A few solos, a refrain or juxtaposed relationships between Floyd and Vera, Vera and Canewell, Ruby and Hedley.

Margo Hall, Shinelle Azoroh and Omoze Idehenre as August Wilson’s women, three in this case, BRING IT as Hall’s more mature “Louise”; her niece, “Ruby,” the youngster portrayed by Azoroh; and “Vera,” the woman Floyd hurts. Idehenre’s Vera loves her man Floyd after his desertion and return, despite her better judgment. Canewell, Floyd’s band member, also loves Vera, yet he loves her enough to let her go – such a beautiful moment in the play. How many of us are able to free that which we want so much to hold on to?

This play is as much about liberation and freedom as it is about finding the moments between pain and sorrow to love and laugh. Though the play opens on a repast or meal after a funeral, “Seven Guitars” is anything but sad. It is just one of our stories, one of the many stories Black people have lived over the past 100 years, documented by Wilson in his 10-play cycle.

The company’s artistic director, Jasson Minidakis, wanted to try a different approach to Wilson, to interrupt the classical feel to the work, take it out of sitcom or cinema mode and make it more abstract and ethereal. In this way, the work reminded me structurally of MTC’s production last season, “In the Red and Brown Water.” Just as place was central to this one of Tarell Alvin McCraney’s plays, the same is true of Wilson’s “Guitars,” which takes place in the backyard in the Hill District in Pittsburgh – Wilson’s home. “Red and Brown,” New Orleans, references McCraney’s home.

“Red and Brown” is the first story in McCraney’s loosely knit trilogy, “Guitars,” a linchpin in the loosely connected stories that preceded it and follow “Ma Rainey’s Black Bottom,” which looks at the Chicago music industry and its exploitation or attempted exploitation of Ma Rainey and King Hedley II – the story that looks at what happens when the unborn baby grows up.