Since the last hunger strike, the administration via the “Office of Corruptional Security” has instituted documented military torture tactics here at Pelican Bay State Prison in order to create hostile living conditions and attempt to turn prisoners on each other. But many of us have seen these tactics before, so we know how to deal with it.

Some are filing complaints to document the abuses all the while knowing the 602 complaints will be cancelled, denied or rejected by the PBSP Appeals Coordinator’s Office. The head appeals coordinator was actually found guilty in Knight v. Nimrod (9th Circuit) of intentionally interfering with prisoners’ right to file grievances.

He was forced into retirement allegedly by Pelican Bay State Prison administrators after the last hunger strike. I believe it was to cover up the retaliation by again interfering with the appeal process by denying, rejecting and cancelling 602 grievances. 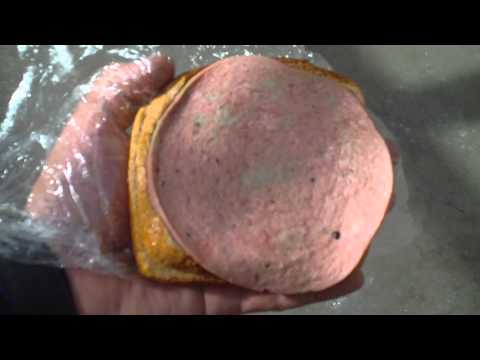 It has become routine for prisoners to complain about the very small and/or spoiled food portions on the trays. This tactic is noted in the military’s training manual entitled “The Manipulation of Human Behavior” as “dietary manipulation,” in which prisoners are fed enough to keep them physically alive while weakening their resolve not to “cooperate” or debrief and creating aggravation amongst prisoners.

Another documented tactic is the use of loud noise. Here the PA system is turned up so loud that it not only startles prisoners but the volume hurts the ears. Another is darkness. When a prisoner’s cell light goes out, it has become routine for the prisoner to stay without lights for anywhere from 10 to 21 days.

Also, prisoners are arbitrarily being denied out-of-cell exercise at least two to three times a week. Maintenance is used as an excuse: There are six, eight-cell living/housing pods in each block. Each pod is its own separate secured area; prisoners are not able to go from pod to pod.

Yet when one cell is painted, all the block is placed on lock-down even after the painter has gone home for the day. So prisoners are denied out-of-cell exercise, and it is routine for the SHU to be put on lockdown for every holiday so the administrators and correctional officer staff can celebrate the holiday with their potluck lunches and dinners while prisoners are locked up in their cages. Yes, it’s aggravating but expected. After all, this is Pelican Bay.

We have been able to review the 7.0 Security Threat Group/Step Down Pilot Program, and in two words, it’s bullsh-t! There is no real change to the debrief, parole or die underground policy that has been in place for approximately 30 years. In fact, they have added criteria to lock-up more prisoners.

We have been told in no uncertain terms, “Parole, debrief or die!”

The “Department of Corruption” cites approximately 4,000 alleged gang members and associates will be reviewed for “possible” participation in the Step Down Program. But they have projected there will be a minimum of 5,000 prisoners placed in the SHUs under the new security threat group guidelines, which means the department will slam at least 1,000 more prisoners.

So that means the “Department of Corruption” will be paid $77,740 per prisoner per year – so that’s $77.740 million above its already bloated budget. But the department cites that each prisoner will be in the SHU for three to five years during their “review,” which turns the $77.740 million into $233,220,000 at a minimum. Now that’s job security!

Of course the taxpayers will foot the bill, as the department will cite the “worst of the worst” and the need to protect the public from these “gang members.”

We have been able to review the 7.0 Security Threat Group/Step Down Pilot Program, and in two words, it’s bullsh-t! There is no real change to the debrief, parole or die underground policy that has been in place for approximately 30 years. In fact, they have added criteria to lock-up more prisoners.

The new Security Threat Group Pilot Program does nothing to change the use of fabricated information nor allow for a real avenue of release for prisoners who have been labeled as having “notoriety,” which I find ironic as the so-called notoriety comes from decades of refusing to debrief and become informants for the “Department of Corruption.” We have been told in no uncertain terms, “Parole, debrief or die!”

The fact is that no matter how harsh or abusive the living conditions continue, there will be prisoners who refuse to be broken just as a matter of principle. The irony is that this department has gained political power by citing “the worst of the worst” and multiple catch phrases made up by their media spokespeople and demanding that prisoners become informants by debriefing, all the while upholding the very well documented and entrenched “code of silence” for its own employees and members.

Look at the history of documented abuses and for every one reported, there are hundreds unreported – be it for the retaliation or intentional interference in the appeal process, which many prisoners feel is just not worth the hassles. There are reports of correctional officer (CO) staff whistleblowers being set up by fellow CO staff for violating their code of silence. See California Senate Hearings of 2001, 2004 and 1999.

Also the final report of October 2007 by John Hagar, the special master assigned by the U.S. District Court, cites, “Monitoring should be continued because CDCR could not be relied upon to not fall back into its ‘code of silence’ ways.”

So it came as no surprise that Gov. Brown vetoed the media access bill. Think about how it would tarnish California’s image as the Golden State with prisoners’ beat up and emaciated bodies on camera.

Yet the spokespersons for the department have the audacity to go before reporters and media and blatantly deny the thousands of abuses being committed every day by department employees and actually state that prisoners in the SHU are being treated “humanely.” Yet during the senate hearings of last year, the now former “secretary of corruption” admitted that prisoners in the SHUs (Security Housing Units) are in fact subject to “harsher conditions.”

So when I see the Pelican Bay Prison spokesman tout out their debriefers before the cameras and media and see them all smiling for reporters, I am reminded of the old Nazi propaganda movie reels of the 1940s that depict a concentration camp kommandant standing in front of a building as the “inmates” smile as they clean and rake the grounds and shine his shoes. Then the camera pans away and shows the gray white smoke billowing from the chimney stack.

So it came as no surprise that Gov. Brown vetoed the media access bill. Think about how it would tarnish California’s image as the Golden State with prisoners’ beat up and emaciated bodies on camera. 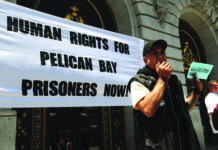 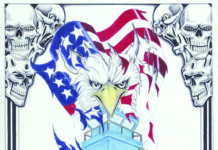 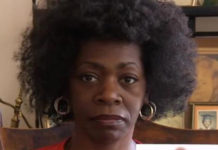 California’s savage system of confinement: An end to solitary is long overdue