Prior to 1987, the CDCR had a policy of segregating alleged members of rival prison groups while assigned to the Security Housing Unit (SHU) exercise yard. This policy was designed to minimize prison violence, and based on available statistics, this was an effective policy. 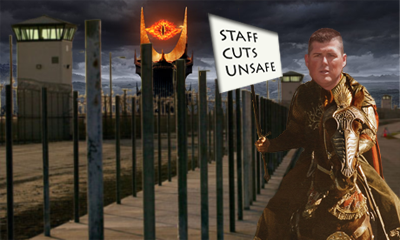 But 1987 marked a change in this policy, when New Folsom State Prison partially integrated their SHU exercise yards. This partial integration resulted in a visible increase in prison violence, but what most people in society were not aware of is the internal dynamics which were conducive towards the facilitation of that abrupt increase in violence. That internal dynamics were the new Folsom State Prison administration and staff micro-managing and orchestrating the conditions, designed to perpetuate both racial and rival group violence.

For example, let’s say a conflict breaks out between a New Afrikan and white prisoner. Instead of trying to contain the conflict, the pigs would move these same two individuals to another unit within the SHU, and now the conflict has spread to another unit. Now more people are involved, escalating the violence and racial conflict. The pigs would then move these same individuals to another unit, further escalating the violence. And being that prisoners are so caught up in the struggle for survival, we tend to become oblivious to the administrative manipulation of the conditions.

I became aware of staff manipulation when they attempted to insert me into the conflict, being that they knew that I had zero tolerance for New Afrikan prisoners being attacked. So they took me out of Bed Rock (i.e., Behavioral Control Unit), moved me in the cell with Brotha Fela, then they moved me in the cell with Brotha Abasi Ganda. Then they moved everybody who was in the initial conflict into the section I was in. It became very intense. I, along with Brotha Abasi, became mediators for the conflicting parties.

What most people in society were not aware of is the internal dynamics which were conducive towards the facilitation of that abrupt increase in violence. That internal dynamics were the new Folsom State Prison administration and staff micro-managing and orchestrating the conditions, designed to perpetuate both racial and rival group violence.

Though we initiated a cease fire in that particular unit, the pigs were doing everything in their power to undermine our efforts. Their anticipation of me mobilizing an attack proved to be an inaccurate assessment of my character. At this point, the pigs moved more prisoners into our section who had been involved in the initial conflict. Truthfully, the yard was on the verge of exploding. Prisoners were allegedly being intercepted for allegedly trying to bring knives to the exercise yard. The pigs’ manipulation reached its desperation point one day when administration pulled me out to the front office and point-blank told me they would have the gunman leave his post and allow me and the Brothas to attack the whites.

The pigs were mad at the whites for allegedly stabbing a guard, and they wanted me to go after this one individual because he was scheduled for release. I stood up and cursed them all and told them to take me back to my cell. When I got back to the unit, I told everybody what had occurred. They didn’t like that.

About two days later, the gang unit raided our cells – my cell and the cells of the Brothas who associated with myself and Brotha Abasi. They also took us to the prison hospital for x-rays to determine if we had weapons in our rectum cavity. All the other Brothas were kept in holding cells indoors while our cells were being searched. I was kept in an outdoor holding cell approximately four hours. They took us back to our cells between 11:30 and midnight.

Them pigs had tore up our cells. Everything was on the floor, personal pictures as well as letters from family.

A little after midnight the gang unit came to our cell and told me I was being moved back to Bed Rock for a conspiracy. Everybody knew that this was a blatant lie. There were Brothas that night allegedly in possession of knives and hacksaw blades, but I was the only one sent to Bed Rock, and they found nothing in me and Brotha Abasi’s cell. But this was punishment because I had refused to spread this racial conflict and be their little pawn.

The pigs’ manipulation reached its desperation point one day when administration pulled me out to the front office and point-blank told me they would have the gunman leave his post and allow me and the Brothas to attack the whites.

People, the above story is very relevant. It exemplifies the orchestrated conditions manufactured by the CDCR, designed to ignite and perpetuate conflict between prisoners.

Being that the CDCR did not get the desired effect from this partial integration, toward the end of 1988, they fully integrated the SHU exercise yard. Those of us who had the capacity to resolve this conflict, the pigs placed us in Bed Rock under false allegations, and as a result, all hell broke out, the prelude to Corcoran State Prison. The conflict was being transported to the SHU yard at Corcoran SP, which resulted in the rapid increase in prison violence. Corcoran SP, at the peak of this CDCR-sanctioned conflict, was averaging two to four assaults a day.

At that time, most prisoners did not understand what was happening, but those of us who have been very active in the movement knew that something wasn’t right. We asked ourselves: Why would the CDC change their policy at this juncture, especially when the policy was proven to be effective? The answer appeared to be a simple one: to intentionally increase prison violence between alleged members of rival prison groups.

We soon discovered that it wasn’t that simple. We realized that the CDC was using us as a means to develop the statistics – propaganda – to justify the building of Pelican Bay State Prison and its over $200 million price tag.

The CDCR justification for Pelican Bay is rooted in two primary criteria: 1) to isolate the so-called worst of the worst, who have proved too violent to be held at other prisons, and 2) to presumably minimize prison violence.

Also, there were two other factors that must be considered. In 1987, the CDCR implemented a “shoot to kill” policy, and in 1988, they changed weapons and ammunition. The new bullet was designed to blow up in our bodies – a guaranteed kill!

Based on the evidence, the policies implemented at both New Folsom and Corcoran state prisons were not only a prelude to Pelican Bay State Prison but were specifically designed to justify and add credence to the CDCR campaign to build Pelican Bay State Prison. If there is any doubt in your mind about these allegations, ask yourself: Why would the CDCR integrate the SHU exercise yard at a time when they knew violence between the different rival groups was guaranteed to break out?

What the CDCR intentionally neglected to tell the public is that it was their policy, both in practice and intent, that was responsible for the rapid increase in prison violence!

The CDCR was not being pressured by state politicians or by a court order or by the public to integrate known rival gangs and group members. So what was the CDCR’s motivation? Also, consider this: The CDCR knew without a doubt that by integrating the SHU exercise yards, all hell was going to break out, so why would the CDCR adopt a “shoot to kill” policy at the same time the forced integration policy was being implemented? And then introduce a new weapon that was designed to facilitate the “shoot to kill” policy?

In a five year period, the CDCR murdered 27 prisoners. At least seven were murdered on the integrated SHU exercise yard at Corcoran State Prison and approximately five men on the SHU exercise yard at New Folsom. Compare this to the rest of the country’s state and federal prison system during the same five year period, where a total of only seven prisoners were murdered by prison guards in all other states combined!

Are the crimes of murder, attempted murder and assault with a deadly weapon – e.g., an assault rifle – justified simply because the victims of these crimes are alleged criminals or gang members? You, as taxpayers have also been the victim of a state-sponsored crime. The CDCR politically hijacked and extorted over $200 million from your hard-earned tax dollars to build the high-tech torture chamber. This prison was not even necessary. Keep in mind that it was the CDCR that escalated the violence.

Pelican Bay State Prison is rooted in deception, exploitation, extortion, violence and murder. It is a symbol of crimes against humanity!

Two-hundred and fifty million dollars could have been used to enhance the quality of learning in the so-called inner cities, provided funding for crime prevention and criminal rehabilitation programs, drug rehab, day care, prenatal care, job training and job placement, and INCREASE teachers wages. We can go on and on. These things alone could have a very positive and productive impact on crime and society at large!

As an attempt to end hostilities and abolish the Security Housing Units, as we know them, the malignancy – the Pelikkkan Bay Factor – has re-emerged with the intent to impede our progress towards justice and humanity. So it is imperative that we resist any temptation to capitulate our moral integrity and fortitude within our endeavors to obtain our Five Core Demands and end all racial and group hostilities.

The factors that served as a prelude to Pelikkkan Bay State Prison are the same factors being employed by the CDCR to justify its continued existence. Though I provided only a brief illustration of the CDCR manipulation and micromanaging of both racial and group hostilities, I believe it is enough to assist us in navigating through the tricks and traps of the CDCR.

We must remain vigilant in pursuit of our righteous cause and ignore the rumors of war being cultivated and propagated by the pigs. Their desperation is a clear sign of how close we are to victory!