This weekend I was detained because I asked for an African American police officer. I was put in handcuffs after being attacked by a bartender at Gestalt Haus, located in the Mission District of San Francisco, and taken to a holding cell for four and a half hours. When the offending officers initially arrived, I was ready to tell my story regarding how the bartender stole my cell phone and clotheslined (choked) me backwards, causing me head, neck and back injuries.

However, when the police offenders arrived, they were not empathetic. They did not ask to view my injuries or seek an account of what occurred. 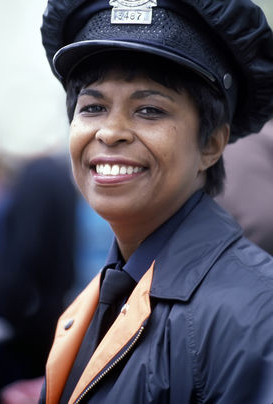 After some initial (calm) back and forth, I felt these offenders did not have my best interests in mind and I asked to speak to an African American police officer. This upset them. At this time, I was coherent and ready to report my attack or leave the scene and be done with the situation.

After standing silently for a couple of seconds another offender walked up and mockingly stated, “I’m [an] Egyptian [police officer], does that count?” I stated, “No, I’d like to speak to an African American police officer.” After a couple seconds, I was handcuffed and told I was drunk in public.

Please note: I was never served alcohol in the bar because I was attacked and therefore the police officers had no primary knowledge of me consuming alcohol; I was also coherent. I asked on more than three occasions to be given a breathalyzer to prove I was not inebriated. They detained me for “public drunkenness” anyway based on their “observations.”

Why an African American police officer? Because I didn’t like the condescending attitudes of the responding police officers and because I understand racism in America. I had just been attacked and it would seem that it would be the job of the police to at least minimally take my statement. They seemed so disinterested that I did not feel safe interacting with them at all.

Just as a person who speaks Mandarin would receive a police officer versed in Mandarin, and a Spanish-speaking person may request a Spanish-speaking police officer, due to the immense racial discrimination I have experienced in San Francisco, I was within my rights to request someone that I felt could “linguistically” address me. Racism is why I see a mental health professional and why I can’t leave my home sometimes.

Why an African American police officer? Because I didn’t like the condescending attitudes of the responding police officers and because I understand racism in America.

Racism is why my stress levels are through the roof. Racism has permeated every bowel of American society and I felt that to be able to competently report my attack, I needed to speak with someone who could at least relate to 500 years of discrimination, hardship, racist police officers, inequality and everything that goes along with racism.

America has constructed our society so that African Americans’ “language” is the color of our skin, just like the language of Spanish, Tagalog, Russian or Mandarin. I should have been afforded the opportunity to “speak my language.” I was not and was taken into custody because I made this request.

Even if I was not within my rights to request to speak to a Black police officer, they should have just said, “No, we’re not doing that. Get out of here.” Instead, I was detained for asking for a reasonable accommodation based on my mental state and taken to 850 Bryant St.

I refuse to settle on the notion, “Well, you know how you’re supposed to act with police.” I am not supposed to act like a subservient captive in the presence of a police officer; they are here to serve me. They are merely glorified customer service representatives, and it is time they are held accountable for their actions.

We must not allow police offenders the opportunity to continue to arrest us for no reason. They must be held accountable. While I was in the holding cell, the security detail told me on more than one occasion when they would pass by and sign my chart, “You are here because you had a bad attitude.” I refuse to be detained ever again because of a “bad attitude.” This is illegal and I will not tolerate it.

People have gotten passive about police offenders’ power. We are lax in asking why the police department has the most overtime pay, yet crimes go unsolved and no one is held accountable. Public policy makers seem scared of the police or don’t seem to understand the wanton destruction that police offenders cause to individuals who have done nothing remotely wrong.

Even if I was not within my rights to request to speak to a Black police officer, they should have just said, “No, we’re not doing that. Get out of here.” Instead, I was detained for asking for a reasonable accommodation based on my mental state and taken to 850 Bryant St.

We must view these times as revolutionary times because we must overthrow this “police offender” state. I refuse to be jailed again for asking the police a question they don’t like.

Many people are aware of these issues and are working to keep this dialogue of police accountability alive. Several authentic discussions are being held in our community and we must all participate and demand that public policy makers hold police responsible for their lack of positive outcomes and customer service skills.

One such discussion regarding positive outcomes for the entire community will be held on Saturday, March 2, in which several conscious community members will come together at the Main Library, 100 Larkin St., to discuss how revolution must still be a part of our lives until the honorable are afforded justice. Dr. Oba T’Shaka, an integral part of the San Francisco Civil Rights Movement in the 1960s, will be on hand to deliver a keynote speech about how we as a community must continue to strive for excellence and constructive action.

Kai W.F. can be reached via the Bay View, at editor@sfbayview.com.