Why do we need so-called Black history? Because we need to be immersed in stories and histories of our people so that we can experience ourselves in our many ways of being, achieving and succeeding. 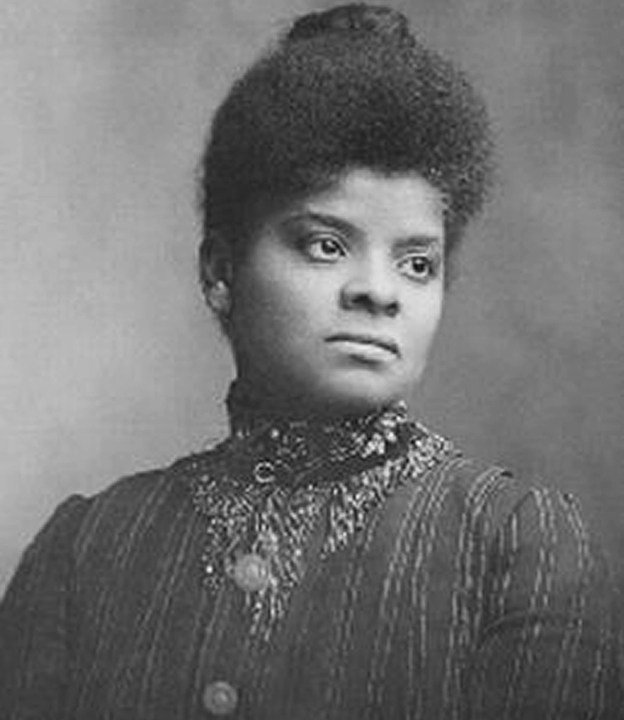 In order to know our strengths, we must witness our strengths as they have been applied so powerfully in the past. Seeing the past shows us that we not only have those strengths but that we can use them to overcome all that is lined up against us at this time, in this place!

Ida B. Wells, the warrior

The courage, determination and drive of Ida B. Wells stands out as a story we need to know and model ourselves after.

Ida B. Wells was born July 16, 1862, as the child of slaves in Holly Springs, Mississippi. Her father, James, was a Native American and a carpenter. Her mother, Elizabeth Bell, was Black and a cook. When the Civil War ended in 1865 and the 13th Amendment was added to the United States Constitution, Ida B., her parents and her seven siblings were freed and legally equal.

Ida displayed high intelligence and at 16 years old, she passed the teacher certification exams and became a teacher near her home in Mississippi in 1878. Three years later, she took a teaching job in Memphis, Tennessee, where she had to commute to work by train. There she learned that being legally equal to whites did not mean being treated equally.

She paid for a first class train ticket and sat in the car reserved for white ladies. When she refused to move, she was physically dragged from the train as the white passengers applauded. The incident was described in the book, “W.E.B. DuBois, Biography of a Race, 1868-1919.”

According to the book, she was “hauled by a pack of bullying white men from the train with the conductor’s flesh between her teeth.” 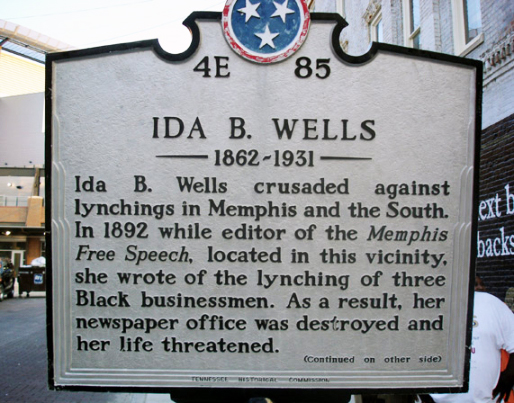 After the incident, she sued the Chesapeake and Ohio Railroad Company for mistreatment and breach of contract. Trying to postpone the case, the railroad bribed her first lawyer to continuously postpone the case. She fired him.

The railroad then tried to settle out of court, but Wells refused the settlement. Then, with her second lawyer, she won the case and $500 in damages. The railroad appealed in 1887 and the decision was overturned. She was forced to return the $500 and pay $200 in court costs.

Much to the displeasure of white society, Ida B. Wells refused to accept second class status. She was confident and sophisticated. She dressed with great taste and high style. She loved to shop, go horseback riding and attend literary club meetings.

She was proud, indignant and unafraid to speak her mind. Because of her skills and outspoken personality, she was invited to contribute op-ed articles to The Evening Star, a Black-owned newspaper. Her first article was about her court case. It was reprinted by Black-owned newspapers across the country.

Her articles were fiery and well written. The issues that stirred her passion were the unfairness of segregation and inequality between white and Black schools. Her powerful articles eventually got her fired from her job as a teacher. This led her to work full time for the newspaper. She was only 25 years old.

A platform of her own

Two years later, in 1889, she was offered a job by The Memphis Free Speech and Headlight newspaper. It was owned by J.L. Fleming, an African American businessman, and Rev. Taylor Nightingale, pastor of the largest African American church in Memphis. She demanded a position at the level of editor and got it. 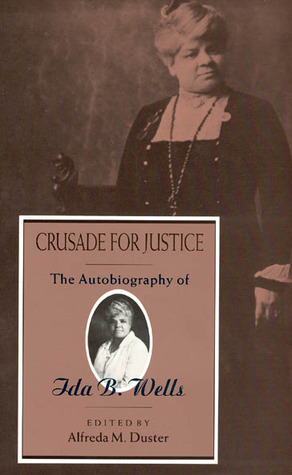 Not only did she write articles, she traveled across the country speaking and recruiting subscribers. The money she earned eventually enabled her to buy out Rev. Nightingale and become co-owner of the newspaper. She then started printing on pink paper so that her newspaper would stand out.

Her nationwide popularity led to her being elected secretary of the Colored Press Association. There, she was given the nickname “Princess of the Press.”

In her autobiography, “Crusade for Justice,” she described her writing style as simple and direct because she “needed to help people with little or no schooling deal with problems in simple, common-sense language.”

The scourge of Jim Crow

The Jim Crow system also brought a dramatic increase in violence against African Americans, especially lynching. Lynching was supposedly a vigilante tool to deal with alleged African American criminal activity. The most common accusation was the rape of white women.

The “Jim Crow” system, which legalized segregation, restricted voting rights and reduced the ability of African Americans to own businesses.

Ida B. Wells refuted those allegations in her newspaper and brought attention to the fact that the men being lynched were often businessmen or successful farmers. Eventually, she began writing articles accusing white women of pursuing relationships with African American men.

Lynching became Wells’ focal point. She devoted more and more time and energy to proving that the lynching of innocent men, women and even children were murders intended to frighten the entire African American population and discourage any social, educational or economic advancement of free African Americans.

The men being lynched were often businessmen or successful farmers.

In 1892, three of Wells’ friends began receiving death threats. They were owners of a large grocery store that was successfully competing against a white store. They were told by the police that they had to protect themselves. When three white men broke into their store one night, the owners shot and killed them. The owners along with nearly 100 other African American men were jailed. 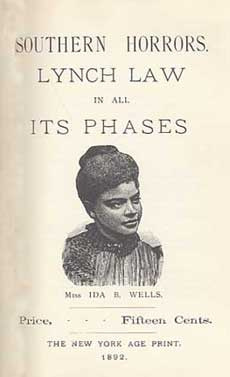 Initially, armed African American men guarded the jail to prevent lynching. When nothing happened after several days, the African American guards thought it was safe to leave. On the night after they left, the jail guards allowed a group of white men to come into the jail and kidnap the three store owners. They were shot multiple times and hanged.

Then, to prevent further violence, the sheriff ordered that any Negro causing trouble was to be shot. That order resulted in a number of African Americans being the targets of random shootings by white people.

Ida B. Wells began aggressively investigating lynching incidents. This led to her publishing her first book, “Southern Horrors: Lynch Law in All Its Phases.” In her book, she wrote that lynching was “an excuse to get rid of Negroes who were acquiring wealth and property and thus keep the race terrorized.”

She also began promoting the idea that African Americans should leave the “town of murderers” and move west. This began a mass movement of African Americans to Oklahoma, causing white businesses to suffer a dramatic loss of business and workers.

Move to a new life

Eventually, Wells’ articles about lynching and about white women pursuing Black men led to death threats against her and her newspaper offices being burned to the ground. She left Memphis and moved to New York, where she became part owner of The New York Age and continued to write articles exposing the crimes of lynching.

She wrote that lynching was “an excuse to get rid of Negroes who were acquiring wealth and property and thus keep the race terrorized.”

She finally ended up in Chicago, where she married Ferdinand Barnett, a prominent attorney and founder of the Chicago Conservator, Chicago’s first African American newspaper. They had four children.

By 1901, she bought all shares in the paper and became the owner. She was only 33 years old.

By the time she died in 1931 at the age of 69, Ida B. Wells’ accomplishments were legendary. Wells was a founding member of the National Afro-American Council, which later became the NAACP. She founded the National Association of Colored Women, devoted to the rights of women and children.

She became a popular speaker around the world. She helped start the Negro Fellowship League to improve the lives of African American men by offering financial assistance, better housing and employment counseling. She created the Alpha Suffrage Club to promote the right of women to vote.

Ida B. Wells was a fiery crusader for African American justice at a time when angry white men indulged in lynching as acceptable behavior. Her determination, courage, ambition and refusal to back down helped change the course of history. Her talents as an investigative reporter, successful writer and newspaper owner were unbeatable weapons.

Her story is one that must be known and embraced by African Americans of all ages today and tomorrow and tomorrow!

This story first appeared on the Bozeman Development Group blog.