Abolition Now! From the Pelican Bay Human Rights Movement: For every problem, there is...
Facebook
Twitter
Email

Due to the litany of contradictions that we as an oppressed people are confronted with, it is easy for us to focus solely on the problem and lose sight of formulating concrete solutions to our problems. The current discussions that are centered around the revisions to the gang validation process are no exception.

And with the recent implementation of the “Step-Down” Pilot Program issued Oct. 11, 2012, ((Pilot Program Memorandum for Security Threat Group Identification, Prevention and Management Plan, dated Oct. 11, 2012 (Step Down Program). [CDCR still has not posted this document online for the public to read; it is available only on the SF Bay View website, at http://sfbayview.com/2012/cdcrs-oct-11-2012-security-threat-group-pilot-program/. – ed.])) it has become absolutely clear that our oppressors, the California Department of Corrections and Rehabilitation’s Prison Intelligence Unit, are dug in on their position of maintaining the status quo of genocide population control via the continued indefinite internment of prisoners in their torture chambers – or solitary confinement units. 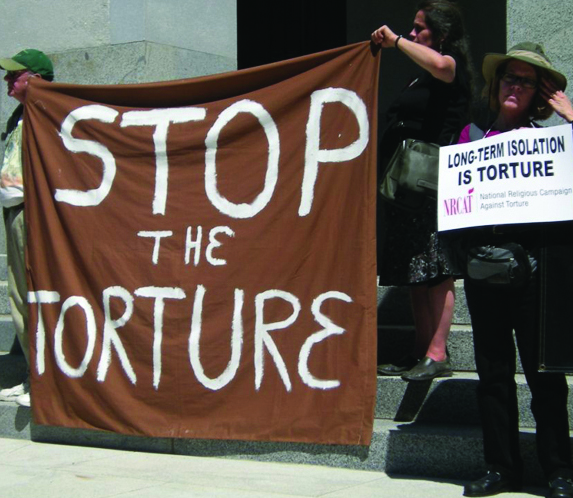 A New Afrikan Revolutionary Nationalist historian and theoretician once warned us years ago when he stated: “I don’t think that we can afford to be nice much longer. The very last of our protection is eroding from under us. There will be no means of detection when that last right is gone … The process must be checked somewhere between now and then, or we will be fighting from a position of weakness with our backs against the wall.”

This prognosis was based upon a historical material analysis of the contradictions that have existed throughout the history of U.S. imperialist colonial slavery, in which the prison industrial slave complex has its roots. The Step-Down Pilot Program is a by-product of state repression, and only serves to reinforce the totalitarian rule of our oppressors over the captive prisoner class.

Proof of this is predicated upon the provisional policy language within the Step-Down Pilot Program in that said policies are an extension of the laws that were enacted under “Jim Crow,” ((For further reading about the historical materialism of Jim Crow as a race-based social caste system, I urge the people to read the New Afrikan Black sista Michelle Alexander’s book, “The New Jim Crow.”)) where U.S. government officials sought to relegate New Afrikans (Blacks), Mexicans, Indigenous Natives, poor Whites, Asians etc. to second class citizenry under the construct of a race-based social caste system that was based upon their previous social status as chattel slaves, alleged felons, vagrants etc.

This meant that our ancestors were stripped of their human rights, which enabled our oppressors to continue and to maintain control over our ancestors via the construct of a new form of slavery that became manifest following what was deemed the Reconstruction Era. This era of Amerikkkan history has falsely led many to believe that the remnants of slavery had ended, as the social standing of this decadent society was somehow improving.

But how can this be, when we still have caste-based economic segregation, with the same transgressions against humanity remaining in existence today? Yes, I am talking about the Security Threat Group Step Down Program!

CDCR’s Prison Intelligence Unit officials have reformed their gang management policies into what they’re now calling the STG-SDP. In other words, they have put lipstick on a pig and call it change, in spite of the fact that a pig with or without lipstick is still a pig! These revisions are supposed to make gang activity “behavior-based.” But we would like to focus on one aspect of the STG-SDP Program, where it talks about issuing prisoners disciplinary form CDC 115 Rules Violation Reports for Gang Activity.

The STG-SDP Pilot Program Gang Validation revisions are in Section 600, “STG Disciplinary Matrix for STG Related Behavior or Activity,” which states in part:

“The STG policy incorporates a behavior based disciplinary component as a foundation to its pre-existing intelligence based system. The STG validation system also incorporates a layered approach of procedural safeguards to affirm appropriate due process in the validation and housing placement of STG affiliates.” ((Section 600 et seq.: STG Disciplinary Matrix for STG Related Behavior or Activity, Page 21.))

“Actions that may or may not have some effect on discretionary parole release have ‘too attenuated’ a relationship with the length of incarceration to constitute a deprivation of liberty invoking due process protections.”

This contradiction is critical in the sense that the overwhelming majority of indeterminate SHU class prisoners have long surpassed our minimum eligible parole dates that were handed to us under the Indeterminate Sentencing Law (ISL) that was repealed in July of 1977, meaning that any disciplinary CDC 115 Rules Violation Report that CDCR’s Prison Intelligence Unit officials choose to impose upon us for alleged “behavior-based” gang activity subjects us to summary executions via the subjective whims of our oppressors.

Now, how is this phenomenon any different from the race-based social caste system that existed under Jim Crow, where New Afrikans were falsely arrested, harassed, tormented, dehumanized, lynched, hanged etc. on the spot, under suspicion of violating the Black Codes, ((For further information about the historical materialism of the Black Codes and vagrancy laws, I urge the people to read the New Afrikan Black sista Michelle Alexander’s book, “The New Jim Crow.”)) or “vagrancy laws”?

As was the case under the Jim Crow social caste system, CDCR’s Prison Intelligence Unit officials also have a history of filing false reports against prisoners. This truism has been substantiated by the following facts: 1) A civil §1983 legal petition that a prisoner at Calipatria State Prison brought forth against IGI Officer E. Duarte, ((See Velarde v. Officer E. Duarte, Case No. C-11-00287-AJB-CAB, dated Feb. 10, 2011.)) where said CDCR PIU agent planted evidence in the prisoner’s cell and then falsely charged and validated the prisoner as a prison gang member; and 2) in 2006, a prisoner with a violence-free prison record named Ricky Gray was validated as a member of the Black Guerrilla Family and given an indeterminate SHU sentence. But the warden at his prison, who Gray claims was sympathetic to his case, took an unusual step: He instructed a staff assistant to re-interview the informants who had given evidence against him. The assistant concluded that the entire validation package was “comprised of conjecture, second hand expression, assumptions, frivolous statements, incomplete documentation and blatant lack of thorough investigation.” ((In 2006, prisoner Ricky Gray, who had a violence-free prison record, was validated as a BGF prison gang member. The warden in this case took the unusual step of instructing a staff assistant to assist Ricky Gray with investigating the evidence that was being used to validate him, and the investigator concluded that the validation was based on conjecture, as reported in the December 2012 issue of Mother Jones magazine on Page 32.))

These contradictions are further magnified by the fact that under the “some evidence” standard that is applied to disciplinary hearings and prison gang validations, the courts have historically refused to analyze, weigh or evaluate the credibility of the evidence that is being used to keep us indefinitely consigned to their torture chambers! ((“Some evidence” is the standard of review that due process requires, meaning that a gang validation or a disciplinary finding will be upheld as long as there is some evidence. See Superintendent v. Hill, 472 U.S. 445 (1985).))

It has also been proven that CDCR’s Prison Intelligence Unit officials have a “rubber-stamp” process in place when it comes to investigating evidence in gang validations, as was proven in the Lira v. Cate case. ((The courts factually found that CDCR IGI officials routinely “rubber-stamp” their investigations by not independently reviewing the evidence used in gang validation. See Lira v. Cate, Case No. C-00-0905-SI, dated Sept. 30, 2009.)) Therefore, it is fundamentally impossible for those officials to be “re-affirming” our human rights to due process protections in their STG-SDP program, when historically they have been engaging in systemic extra-judicial activities ever since these “torture chambers” have been in existence! ((In the San Quentin 6 case, these prisoners were falsely and wrongfully charged with killing prison guards on Aug. 21, 1971, as they were later acquitted. But while awaiting trial in solitary confinement, they were deprived of outdoor exercise and other essential human rights. See Spain v. Procunier, 408 F.Supp.534 (N.D. Cal. 1976).))

So now it is necessary for us to move forward and utilize our NARN science in order to resolve these contradictions – the problem – so as to enhance the power of the people! Hence, the Pelican Bay Human Rights Movement (PBHRM) is hereby proposing to the people – the Prisoner Hunger Strike Support (PHSS) Coalition – that we initiate an online petition campaign with the goal of obtaining 1 million signatures. With the current advancement of media technology in today’s society, we believe that a million signatures can be very easily achieved in time for the next state and federal elections. But prior to the next elections, we propose that the 1 million signatures be presented to both state and federal legislative officials in Sacramento, California, and in Washington, D.C.

A copy of the proposal needs to be forwarded to every California state and federal legislative official.

And with that, we would like to thank the community for taking the time to review this PBHRM proposal, with the hope that you will find the humanity and determination to act upon the ideas herein.

For more information about the Pelican Bay Human Rights Movement, contact us: