“The Supreme Court’s decision is a giant leap backward for America. The justices’ decision to strike down key sections of the 1965 Voting Rights Act is deeply disappointing.

“Just a few weeks ago, we celebrated the life of my late husband Medgar Evers, who fought and died for equal rights for all Americans. This ruling strikes directly at the heart of his work. When he was gunned down, he was carrying shirts that said ‘Jim Crow Must Go.’ With today’s ruling, and the rampant attempts throughout the U.S. to stymie the rights of people of color, the elderly and the poor, Jim Crow is not only alive, he’s in a Brooks Brothers Suit, toting a law degree.

“Now more than ever, we, as citizens of this great nation, regardless of your age, gender or skin color must get engaged on issues that are vital to move this country forward. We must pull together and encourage elected officials from the state level to the highest levels of government to enfranchise voters rather than disenfranchise them. The work begins anew, for the future of this country.”

A preliminary – but basic – thought in the wake of the Supreme Court ruling on the Voting Rights Act:

I was too young to be involved in the fight for the original passage of the Voting Rights Act in 1965, but I was in South Carolina during the struggle for renewal of the bill in the early 1980s. 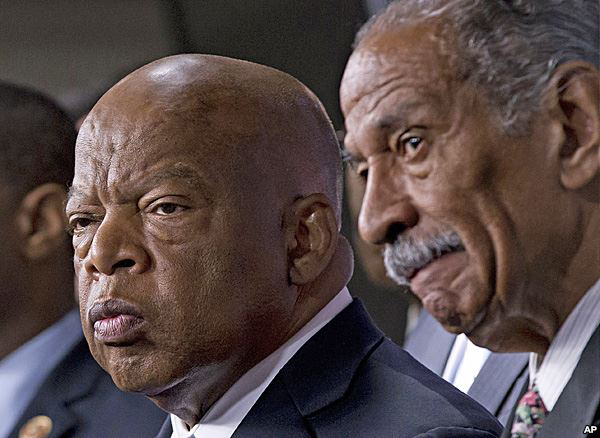 Many have forgotten that the Republicans temporarily took control of the United States Senate in 1980 during the year Ronald Reagan was elected president. That elevated South Carolina Sen. Strom Thurmond to the chairmanship of the Senate Judiciary Committee. Thurmond immediately said that one of his goals as chair would be to kill the Voting Rights Act, which was up for renewal in 1982.

In South Carolina, we formed a group called the South Carolina Voting Rights Campaign to fight for renewal of the act. To show South Carolina support for the act, we set a goal of 10,000 signatures on petitions. By the time the petition campaign ended, we delivered more than 30,000 signatures to every congressional district office in the state as well as to the U.S. Congress in Washington.

At the same time, we sponsored workshops and rallies and demonstrations throughout South Carolina in support of the Voting Rights Act. When the Southern Christian Leadership Conference held a march from Selma, Alabama, to Washington, D.C., for the same purpose, we helped coordinate the march when it came through our state.

One of our actions was to follow Sen. Thurmond every time he returned to South Carolina for a public event, holding demonstrations to protest his stand against the Voting Rights Act.

Some of us were jailed during those actions.

That should give us a guide on how to react to the Supreme Court’s recent ruling, particularly as we observe state governments from Ohio to Texas enact laws making voting harder and harder for people who do not vote the way those governments would like them to vote.

“Now more than ever, we, as citizens of this great nation, regardless of your age, gender or skin color must get engaged on issues that are vital to move this country forward. We must pull together and encourage elected officials from the state level to the highest levels of government to enfranchise voters rather than disenfranchise them. The work begins anew, for the future of this country.”

This hits African-Americans the quickest and the hardest, but it is certainly not limited to us and ours.

The authority to participate in the governing of our communities, our cities, our state and our country – the right to vote – is not secured by the Supreme Court.

That authority is not secured by a presidential proclamation or a civil war or an act of Congress or a voter initiative.

Our right to participate in the governing of our own lives was and is both authorized and held by our own hands.

It can be permanently minimized, or taken away altogether, only if we allow it.

The question, therefore, is not about what the Supreme Court has done. The question is, what must and will we do in response?

A glimpse into the life of Honorable James Edward ‘Billy’ McKinney

Can’t vote because you’re in jail? Yes you can!

Millions of African Americans will be disenfranchised on Election Day