“A wall is just a wall and nothing more at all. It can be broken down.” – Assata Shakur

Declaration of the United Kage Brothers

We, the United KAGE (Kings Against Genocidal Environments) Brothers, welcome you to our communion. We aim to unite and unionize the movement from within the belly of the beast to without. We wish to unite all people, regardless of color, race, creed, gender or sexuality. 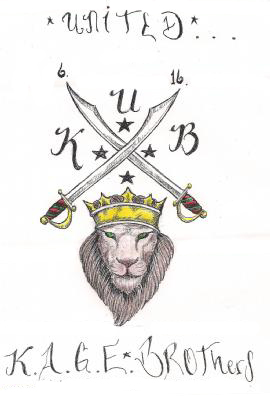 We all have much in common when dealing with prejudices and classism. Consequently, we think that true civil rights of men and women alike emanate from the laws of nature, that all human beings are created equal. However, their rights are being capriciously usurped by the powers that be. These woes are being imposed on the proletarian class, the “lower” class.

We aim to put an end to all racial prejudice, conflict and unnecessary waging of war, both in prison and on our urban streets in the United States of America. Many lives have been lost in this struggle, but not in vain! In San Quentin all the way to Attica in 1971 and beyond, prisoners have banded together to exemplify this need for a collective push.

Through a united front in peaceful demonstration, prisoners of all races participated in hunger strikes protesting inhumane conditions and undue mistreatment in California’s SHUs (Security Housing Units) and ASUs (Administration Segregation Units), i.e., The Hole. This band of brothers set aside the ongoing “racial wars” and came together to declare an end to all wars that were being fought throughout California’s prison yards. Once again, the time for solidarity is now!

As Bobby Seale’s book title says, “Seize the Time”! quoting Huey P. Newton. When the doors of opportunity open, we must seize the time.

Umoja (pronounced oo-moh-jah) is the Swahili term for unity. We have chosen to operate our collective under the name United KAGE Brothers in order to reflect the emphasis we place on the need for united actions from a united front. This is necessary as we begin to address the problems facing our communities. We believe that any successful remedy will be the product of a united effort.

We also believe that everyone has something to contribute. Our sole purpose is to use the power of collective action to solve common challenges. We have no dues, just “do’s”! Thus, we are always looking for fresh ideas and constructive criticism.

Demand 1) That inmates here in CSP-Corcoran ASU be allowed to possess TVs and/or radios.

Demand 2) That ASU inmates are provided access to an adequate library and/or legal assistance.

Demand 3) That inmates not be further punished upon completion of their SHU term.

Demand 5) That ASU inmates be afforded due process in 115 hearings.

Demand 7) That ASU inmates be provided with adequate laundry exchange.

Demand 8) That canteen food items are given in their packaging.

Demand 9) That ASU inmates be afforded educational and rehabilitative programs and opportunities.

Demand 11) That no reprisals be taken for the employment of our rights to petition.

As we frontier our left-4-dead movement from prison to the street, we in addition demand an end to federal and state funding of the prison system and redirect those monies towards schools and education. Moreover, programs for vocational training and redemption programs for parolees must be funded.

William E. Brown, aka the rapper Pye Face, is the lead petitioner and minister of litigation and information for the United KAGE Brothers. Send our brother some love and light: William E. Brown, T-58106, CSP Corcoran 3A05-223, P.O. Box 3461, Corcoran CA 93212.