“Luck is the last dying wish of those who want to believe winning can happen by accident. Sweating, on the other hand, is for those who know it’s a choice!” – Raquel “The Rock” Miller, 2012 Olympic alternate, 2013 National Golden Gloves and National Adidas PAL boxing champion 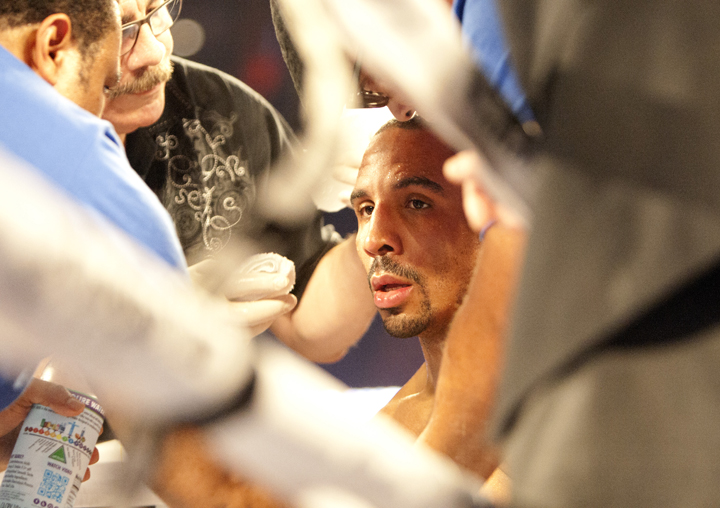 Edwin “La Bomba” Rodriguez thought he’d get lucky and defeat Andre “Son of God” Ward. He talked a lot of smack. Played a lot of mind games. But in the end, it all came to nothing. He lost. Decisively.

But the most interesting thing about this fight – for those who knew how to look – was not Edwin “La Bomba” Rodriguez’ antics. Flailing about in the ring, attempting first to bum rush, then maul, intimidate and fight dirty in a completely classless performance against Andre “SOG” Ward, Edwin Rodriguez proved that he has no true boxing skills.

He even managed to hit the center referee, Jack Reiss. Figure that one out if you dare.

Be that as it may, that wasn’t even the most interesting part of the fight. Why, you ask, when all action was halted in the fourth round as center ref Jack Reiss fined each fighter $2,500, deducted two points from each man’s score and threatened both with disqualification due to “un-sportsman like behavior?” Why wasn’t that the most interesting moment? 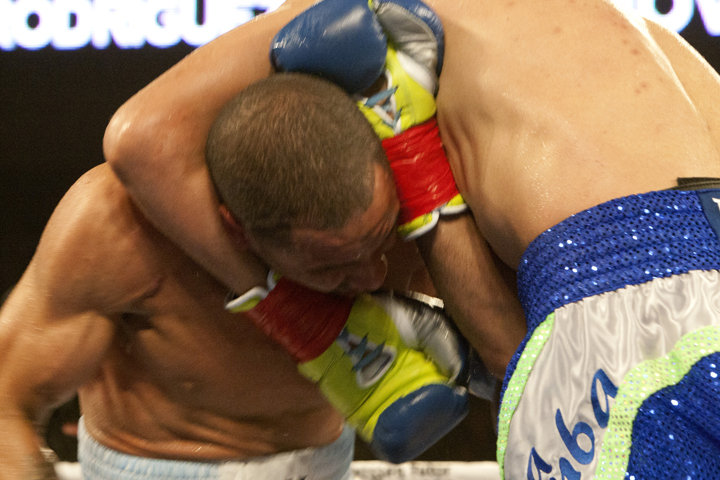 Because that moment was “La Bomba” putting on a show, that’s why. That was an undisciplined fighter behaving true to form. Rodriguez didn’t come to win rounds, as Andre Ward later observed. He came, in Mr. Ward’s words, “trying to get lucky.”

But the reality check hit. One would think that even the most insensate individual should realize that when you’re getting paid one million dollars to do anything, you should take whatever you’re doing very seriously.

So it was his fault and the fault of Team Rodriguez that they didn’t take Team Ward seriously.

The key is in knowing where and how to look – beyond sensationalism, beyond unusual occurrences, beyond hype, posturing, name-calling, sloppy unprofessional boxing, cursing and publicity stunts.

This is what Edwin Rodriguez brought to the table on Saturday night.

What Andre Ward brought was a subtle but obvious sharpening of his skills and technical acuity. And this technical acuity is still growing. That this was so evident even after 14 months out of the ring is nothing short of amazing.

It would bode well for the world to sit up and take note. For at the age of 29, Andre Ward has already been in the fight business for 20 years. And he has continually improved since the age of 9.

And while his growth as a young veteran has been phenomenal – it has not occurred in a vacuum. It has been guided by a team of seasoned professionals: his trainer-mentor-coach, Virgil Hunter, 2011 Coach of Year and the man who has helped to guide him for 20 years; his manager, James Prince; and Antonio Leonard of Antonio Leonard Promotions – men who are boxing legends in their own right. 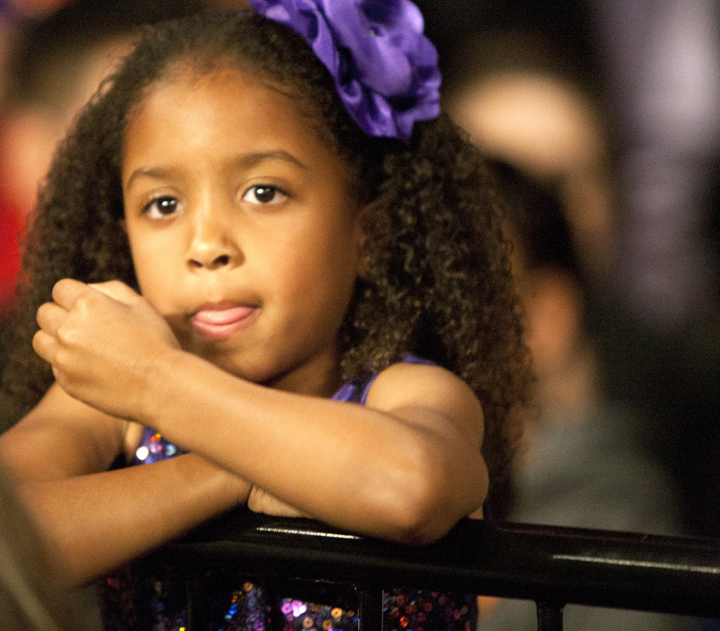 At every fight, in the spotlight and out of it, his entire family is there for him, the same as they are behind the scenes. He pays homage to the boxing greats, and some of them were there for him this night: Iron Mike Tyson, Sugar Ray Leonard and Roy Jones Jr.

Andre Ward’s potential still hasn’t peaked. And he carries himself as a professional who takes his work seriously. His corner has shirts that say, “Don’t Be Outworked.” This isn’t a catchy phrase for the press. This is the real deal feeling and work ethic.

These traits clearly shone through in this Nov. 16, 2013, title bout against challenger Edwin Rodriguez. A title bout that in fact became not a title bout when his challenger didn’t make weight. “La Bomba” came into the weigh-in at 170 pounds, which is 2 pounds over the 168-pound division limit for boxers fighting as super middleweights.

And the fact that two hours later he declined to be weighed again not only caused Edwin Rodriguez to lose his opportunity to fight for the WBA championship title, but it cost him $200,000 of his lucrative $1,000,000 purse.

For according to California State Athletic Commission (CSAC) rules, Edwin Rodriguez had two hours after the initial weigh-in to try to lose the extra two pounds without penalty. When he failed to even try to do so, he was fined. Half of the fine goes to CSAC, the other half to Andre Ward, whose purse then rose from $1.9 million to an even $2 million.

But then the tension in the air did not abate. Rodriguez had to agree to a 9 a.m. weight check on the day of the fight, at which he could not weigh more than 180 pounds. He barely squeaked by at 179.8 pounds.

What? Rodriguez was 170 pounds at the official pre-fight weigh-in and 179.8 pounds (on a battery-operated scale!) the day of the fight? He gained 9.8 pounds? How unprofessional is that?

Meanwhile, Andre Ward, who had weighed in at 167.8 pounds, said in the post-fight press conference that it felt as though he was fighting someone who weighed 190 pounds. 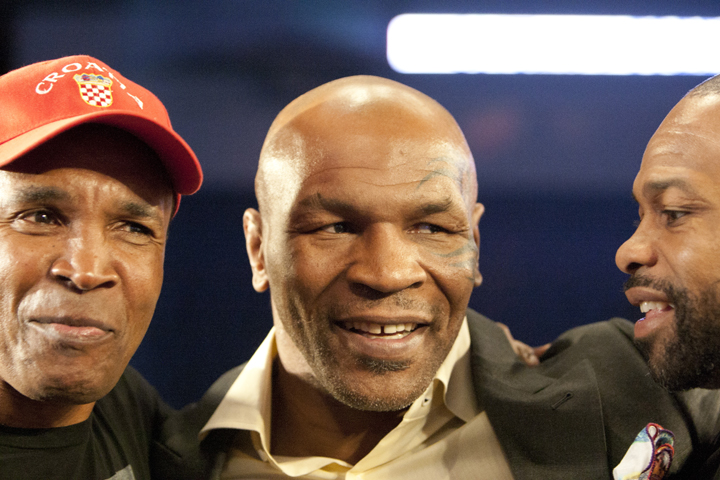 Be that as it may, he still soundly trounced Edwin Rodriguez in a unanimous decision with scores of 118-106; 117-109; 116-108. Mr. Rodriguez was misreading Ward’s right-left combinations all night. He tried tying up Mr. Ward’s deadly left hand by repeatedly clinching (holding) and hitting to the back of the head.

And despite the fact that Mr. Rodriguez had proclaimed Andre Ward to be “definitely a dirty fighter,” his tactics in the fight of head butting, hitting to the back of the head, holding, holding the ropes, throwing low blows spoke more to him being the dirty fighter and trying to intimidate.

These tactics didn’t work. Edwin “La Bomba” Rodriguez lost physically and mentally to a champion. He also lost financially to himself.

According to Bud Barth (bud.b50@gmail.com) of NEWS telegram.com: “Rodriguez’ final paycheck, after fines, will be considerably less than $797,500. 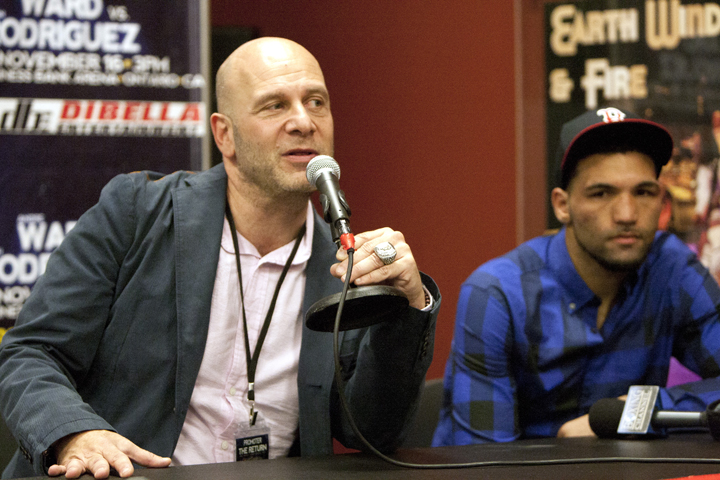 “If those percentages, based on his previous fight, are accurate, it all adds up to $762,500, which leaves Rodriguez with $237,500 – before taxes. And he could be in an obscenely high tax bracket after his lucrative year, which included $750,000 in Monaco purses.”

This is what tends to happen when one writes checks with their lips that their behinds cannot cash. The Lip of the East defeated himself before ever he set foot in the ring with Andre Ward.

One wonders how he managed to be 24-0 prior to meeting Andre Ward in the ring. However he managed, he is now 24-1. 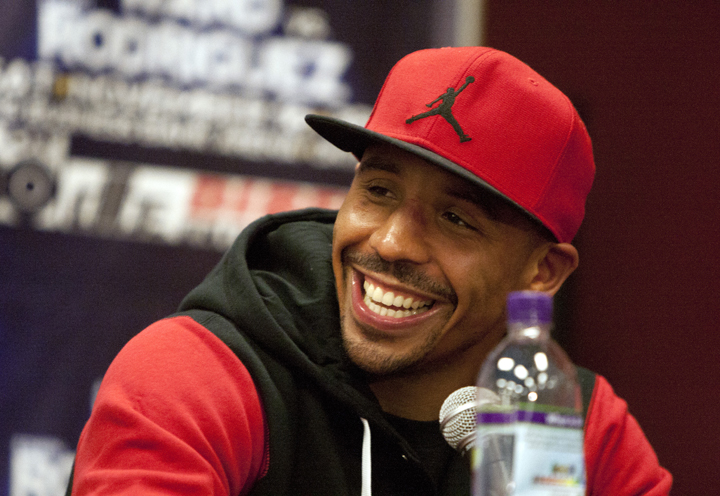 And Andre Ward is now 27-0, nearly a quarter of a million dollars richer after this fight than he stood to be going into it, and with upcoming lucrative exclusive endorsements with Nike and Air Jordan.

Meanwhile, the Lip of the East’s apologies at the official post-fight press conference mean very little as he still proclaimed in his post-fight interview with Radio Rahim that Andre Ward is a “dirty fighter” and seeks to use that as an excuse for his loss.

I stand by my pre-fight statement that Dominican-born Edwin “La Bamba” Rodriguez (now 24-1, 16 KOs) needs his mouth washed out with soap for making an obviously inflammatory, untrue, publicity stunt claim that Andre “SOG” Ward is “definitely a dirty fighter.”

Make it a big bar – and make it lye soap, to correspond with the lies Rodriguez is telling not only himself, but any and everyone who will listen.

Andre Ward interview post-fight interview with Radio Rahim: “I’m just glad to be back and be busy!”