She came and she showed us all how it’s done.

Her fans came out to support her in waves. And Raquel “Pretty Beast” Miller did not disappoint.

It is a known fact that boxers always enter the ring to music of their choice, flanked by their crew. It makes a statement.

When it was time for Raquel “Pretty Beast” Miller to enter the ring on Aug. 6, 2016, she came flanked by nine women who entered the Oracle Arena rocking to the strains of Beyonce’s “Formation” and doing Formation Walk moves of their own design and execution.

It was done intentionally, it will happen again, and it was done specifically to show the unity among women, supporting each other, sharing the light, being strong, powerful and fierce.

“I decided to walk to Beyonce’s song, ‘Formation,’ and ask all of my ladies to walk with me because I felt it was important to show us women strong, beautiful and supporting one another,” said champion boxer Raquel “Pretty Beast” Miller.

“That was the reason I made sure to ask my cut woman to be a part of my walk and corner. To show beautiful women in all roles: boxer, cut woman, accountants, bookkeepers, dental hygienists etc. All beautiful women who support each other.”

It was a powerful statement, made even more so when Raquel Miller unanimously defeated Gabrielle Holloway as the two women made boxing history on Aug. 6, 2016, in Oakland’s famed Oracle Arena, as the first female boxers to ever fight on a ROC Nation fight card.

It is a hell of a statement. And considering the rarified air in which she suddenly found herself on no more than a week’s notice, it was a hell of a powerful statement!

All of the fighters featured by ROC Nation Sports won decisively, either by unanimous decision or, as with Junior Younan and Maurice Hooker, by an impressive knockout minutes into the first round.

Typical of the class and eloquence of Andre Ward, whether inside or outside the boxing ring, his remarks in response to questions about the addition of women fighters to a ROC Nation fight card showed that he is a champion who knows his boxing history.

Recalling the days of Christy Martin fighting on Mike Tyson undercards and the illustrious career of Laila Ali, Mr. Ward nevertheless recognized that women boxers do not get the respect, recognition and exposure that they deserve.

“I think for one, this is a great shot in the arm for women’s boxing,” he said. “Unfortunately, our women do not get the respect they deserve. They do not get the exposure that they should get.

“As you know, Raquel Miller and many other female fighters are doing what we do. They’re training, they’re grinding, but they’re just not always noticed. I remember the days when Christy Martin used to fight on Mike Tyson undercards, and Laila Ali; they got some good publicity, some good shine, but there are so many other young female fighters coming up and women fighters that have been fighting and have been established that we don’t even know about – that people don’t even know about.

“It’s a beautiful thing therefore to have a fighter of Raquel Miller’s stature on the card, I’m excited and happy for her, and I hope that they get their respect. I don’t believe that there isn’t a market for women boxers. Let’s create a market; let’s create some buzz, I’m happy for her.”

Ms. Miller was equally as excited as well as analytic and knowledgeable about her chosen profession. Speaking with 48 Hours Out, Inside the Ropes, EsNewsReporting.com, Paul Marcellus TV, Troy King’s BoxingEgo, KNBR Sports and other media before and after her historic fight, Raquel’s comments were on point as she discussed her phenomenal career, her views concerning women boxers, and how important the support of ROC Nation and Andre Ward have been in giving women boxers this important opportunity to shine and create a venue that both showcases and respects the skills of Women Who Box.

“I’m always in the gym fighting my opponent, shadow boxing and competing. I think I should always be competing. That is how you get better.

“So to be given this opportunity by ROC Nation, it’s like when I win, we win. And to have Troy King – who is like my big brother – shouting me out, and for Dre acknowledging me the way he did was everything. Not only was it amazing for Troy to just speak up and say how do you feel about women boxers; but for Dre to acknowledge me the way he did and to have the response that he had was everything. I feel like so many women can just smile and love Andre Ward so much more because he’s ready for us to have our shine too. “

I really loved it when Raquel said, after the fight: “I definitely feel that as a woman it is important to understand that we’re always beautiful inside and outside the ring. We fight a combat sport, and it’s an aggressive sport, but it doesn’t mean that I have to be masculine to do it.

“So I like to play up my beauty. I love girly stuff, I love pink, I’m a woman and I box. The world needs to get used to it and get out of the notion that women don’t belong in the ring. We belong anywhere we want to be.

This reminded me of Florence Delores Griffith Joyner (Dec. 21, 1959-Sept. 21, 1998, also known as Flo-Jo, who was a track and field athlete and the fastest woman of all time. Her world records, set in 1988 for both the 100 meter and 200 meter still stand and have yet to be seriously challenged.

Flo-Jo also developed a clothing line, created nail products, and established the Florence Griffith Joyner Youth Foundation in 1992 to aid disadvantaged youth. She told children, “Don’t try to be like me; be better than me.” In competition, she wore her designer tights, her nails long, her hair pretty and defeated everyone she ran against, male or female!

Raquel’s opponent, Gabrielle Holloway, was not immediately available for comments before or after the fight; but when asked, Raquel Miller said before the fight, “I do not know much about her, except that she’s a south paw, she came to fight, I came to fight, we came to give a good show, I came to handle my business. I’m thankful to her for coming out, and it’s time to go.”

Fighting in Bout #3 – Raquel Miller vs Gabrielle Holloway, the southpaw from Washington D.C. with a reputation as a tough MMA fighter – Ms. Miller did not disappoint. 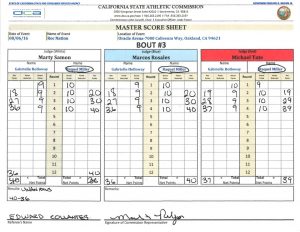 Of the fight itself, Raquel “Pretty Beast” Miller in defeating Gabrielle “Gabanator” Holloway showed the ring acumen of a professional boxer who can think on her feet, analyze her opponent’s fighting style and develop a game plan to be victorious.

Throughout four two-minute rounds, Ms. Holloway seemed to have been more a grappler than a true boxer – and awkward, utilizing a lot of blocks not specific to boxing while attempting to dodge punches and tie up Ms. Miller’s hands.

Ms. Miller did not get to showcase her tremendous skill and power, due to having to spend an inordinate amount of time freeing herself from Ms. Holloway’s grappling, which was reminiscent of the old Big Time Wrestling TV show.

Twice Ms. Miller dropped Ms. Holloway to the canvas, though not via knockout, more due to her own power, ring generalship and Ms. Holloway’s awkward style of fighting.

Ms. Miller made Ms. Holloway miss punches throughout the night and fought on the inside, gaining a unanimous second professional victory and first victory of a female fighter on a ROC Nation card.

Ms. Miller is also no stranger to firsts. She is the first female boxer ever to become an elite athlete and reach Olympic alternate status in a two-year meteoric rise to prowess in 2012.

Additionally, she has competed as a several times state and national champion, a silver medalist world boxing champion in Beijing, China, and a bronze medalist in 2016 Olympic Trials competition.

She was also one of the first women to earn membership on the first U.S. Women’s Olympic Boxing Team in 2012 and was offered the opportunity to fight in Afrika, representing Ghana.

Her professional debut was equally as phenomenal, as she won by TKO in 74 seconds into the first round against Sara Flores.

Powerful, brilliant, and more and more becoming a master at her craft after just six years of training and competition, she is also a continual inspiration as a leader in her Bayview Hunters Point community.

Together with her sister, Taneshia, they have founded Ladies in Power, an organization which empowers young women and girls daily. Through much needed community programs, Ladies in Power founders Raquel and Taneshia bring inspiration and an impressive array of accomplishment to the table, both academic and entrepreneurial, showing what can be done with determination and drive despite obstacles, naysayers and the toxicity of a system designed specifically to un-empower Afrikan people.

After the fight, Ms. Miller did her post fight interviews, stepped back into her high heels and she and her fiance, professional boxer King Steven Nelson, went out to join the crowd, to meet and greet her new Oakland fans, and her many supporters.

Power Forward and Rock On, Raquel!