There are times when the line between shock, rage and sadness become so blurred it is impossible to know when the flow of emotion ends or begins. The shock and rage come from hearing about an African American student violently tormented by his three white housemates at San Jose State University. 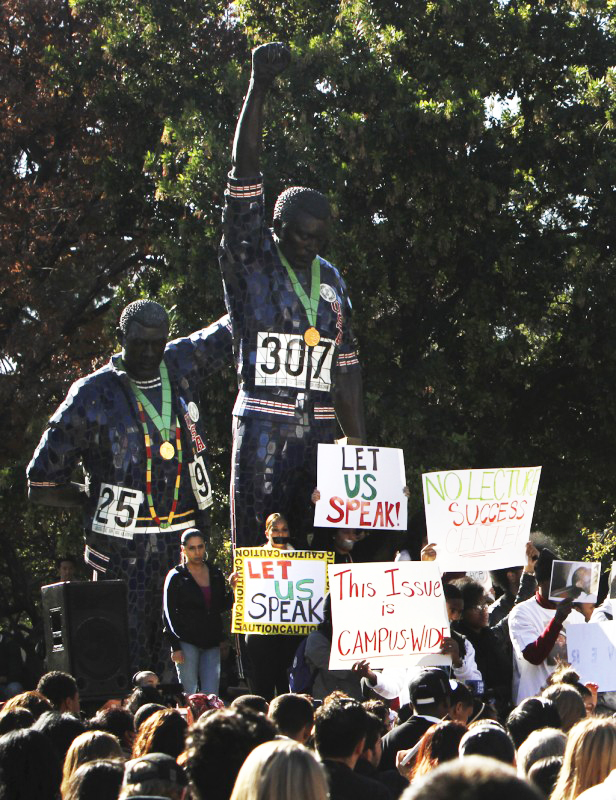 Thrown together randomly as first-year students tend to be, Logan Beaschler, 18, Joseph Bomgardner, 19, and Colin Warren, 18, found common cause in acts of racist sadism against their fourth housemate. They at times forced a bike lock around the neck of this young man. They barricaded him in his room.

They nicknamed him “three-fifths” or “fraction” in reference to the three-fifths Compromise of 1787 that decreed slaves to be less than a full person. They hung confederate flags outside their room. They scrawled swastikas on white boards and hung pictures of Adolf Hitler. Let’s say their names again: Logan Beaschler, Joseph Bomgardner and Colin Warren, three people who made their dorm into a fascist chamber of horrors for their own amusement.

Arrests have been made, the school is holding their own investigation and students are rallying – and that is all well and good. The shock and rage becomes sadness, however, because this is not just any old university. This is San Jose State, also known as Speed City, also known as the place where John Carlos and Tommie Smith won NCAA national championships, learned the skills to set Olympic sprint records and learned the politics to compel them to raise their fists at the 1968 Olympics.

It was the place where Dr. Harry Edwards combined anti-racist militancy with sociology and sports, to create a synthesis that led to the formation of the Olympic Project for Human Rights. It is the place where Lee Evans and Ron Davis showed the world that athletic excellence could be used as leverage to fight for dignity and make history. It is the place where that history is commemorated by the remarkable 28-foot statues of Carlos and Smith that stand in the middle of campus.

I spoke to John Carlos and I cannot do justice to the sadness in his voice.

“This is a heartbreaking situation,” he said. “At San Jose State that monument was established to promote diversity, love, understanding and respect. It is very difficult for me wake up and think that the school would be a place where students feel they can act in such a manner and think they can just abuse a person of color in such a way. Once again we are bitten by the ugly bear of racism. I would hope San Jose State would deal with this in as firm a matter as possible. This cannot stand.” 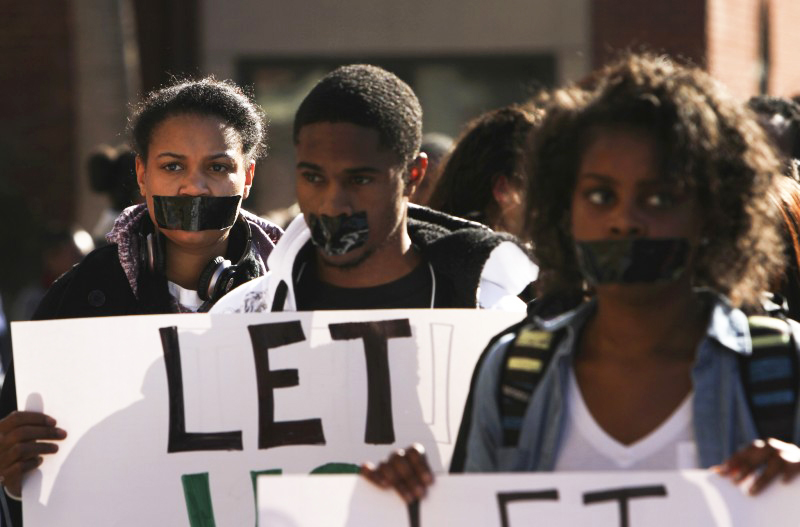 Pressure to make sure San Jose State truly confronts what has happened will be necessary. In recent years, San Jose State has made a concerted effort to cut itself off from its history and anti-racist traditions. They are currently being sued by former cross-country coach Ron Davis, the same Ron Davis mentioned above who was a part of those historic teams of the 1960s and a member of the school’s athletic Hall of Fame.

Mr. Davis is claiming racial bias and discrimination led to his firing. He was fired after the school hired Gene Bleymaier, the fired former athletic director of Boise State who turned that school into a national football powerhouse. Bleymaier is attempting to transform the San Jose State football team into a similar kind of cash cow and a haven for sponsors. Anti-racist history and corporate football don’t mix, and Ron Davis believes that he was a casualty of a new administration with new priorities.

A school that disrespects its own history and its own legacy as an iconic center of African American liberation reaps what it sows. In this case, several residential assistants apparently knew to some extent what was happening, saw the confederate flags and did nothing. Yes, Messrs. Logan Beaschler, Joseph Bomgardner and Colin Warren deserve to be punished to the fullest extent. But this is a school that needs to take a long, hard look at itself. If you are going to be home to “the statue,” you had better be worthy of what it represents.

San Jose State learns a raised fist is not a brand

The young man, whose name has not been revealed, had a heavy U-shaped bike lock put around his neck, had racial slurs and swastikas scrawled on dry-erase boards placed around the room and was renamed by the students with whom he was forced to live as “three-fifths” or “fraction,” after the Compromise of 1787, which deemed slaves to be three-fifths of a human being. 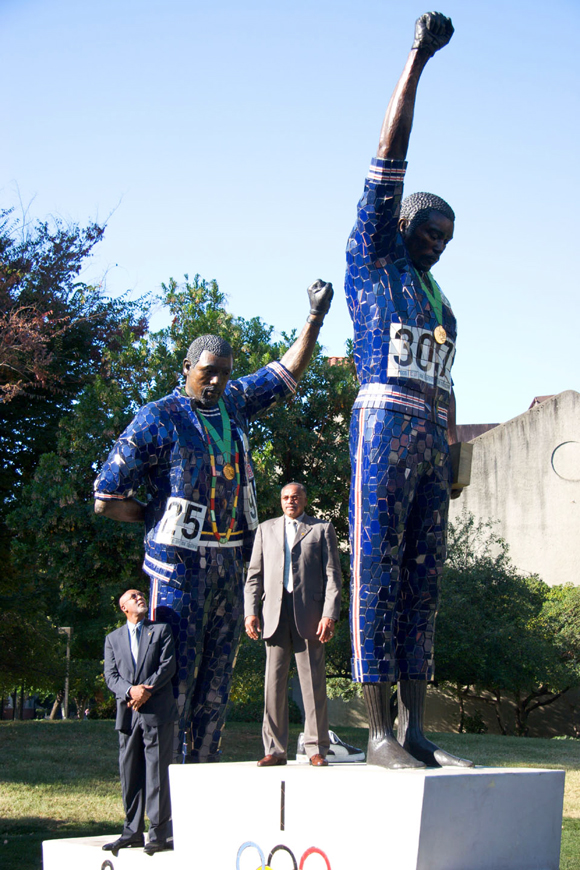 At SJSU, there is outrage that a school which was the incubator of the Black athletes’ revolt in the 1960s, could be a place where such a crime could occur. There is also frustration that residential assistants were conscious enough of the situation to ask the alleged tormentors to take a Confederate flag off their door but did not alert anyone in the administration that their Black roommate might be in trouble.

Then there are doubts that the administration would have even taken it seriously, or whether it all would have been covered up if not for the dogged reporting of the San Jose Mercury News. After the attacks, student leaders asked school president Mo Qayoumi to discuss what could be done. Instead, he chose to keep his commitments at a science and engineering conference in Wisconsin.

Students have also gone public with complaints that they cannot get a sit-down with the man about what happened. “This president, unlike the six or seven presidents I’ve seen at SJSU, has the most top-down management style,” Jonathan Karpf, an anthropology lecturer said to the San Jose Mercury News. “He’s not somebody who handles dissent very effectively.”

Now there are students marching with their fists raised like the statue of 1968 Olympic protesters John Carlos and Tommie Smith at the center of their campus.

But if people had been listening, then Ron Davis could have told them that was not only possible but even inevitable. Ron Davis was hired to coach the cross-country team in 2012. But he was more than just another coach. In November of 1962, Ron Davis ran cross-country for San Jose State as part of the first integrated team to win the Division I championship. He was also the student assistant for the 1969 team that won the NCAA Outdoor Track and Field Championship.

Davis was at the heart of the era that saw people like Dr. Harry Edwards, Tommie Smith, Lee Evans and John Carlos make history at the school. Over the next four decades, Davis coached around the world from Canada and Ireland to Mozambique and Nigeria, as well as in colleges across the United States. Here is what the interim athletic director Marie Tuite said upon hiring Mr. Davis. “He’s a great Spartan. He has such an affection for San Jose State. It’s really an honor for him to recruit young men and women to this university.” 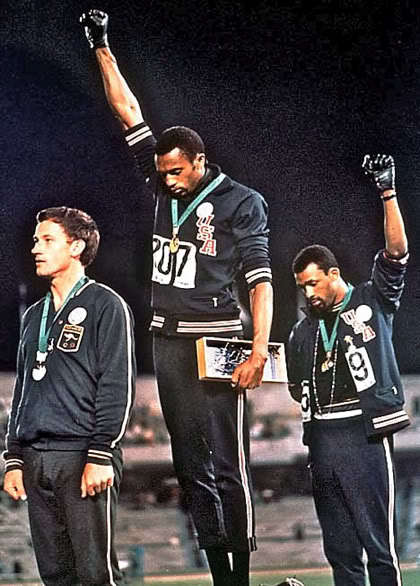 This job was supposed to be a great homecoming and the culmination of a remarkable career. Instead, after one season, one last-place finish (in line with the previous year’s performance), and the hiring of a new athletic director, Ron Davis was not reappointed. He is now suing the school for discrimination, saying that the school draped in civil rights history fired him because of the color of his skin.

The school was not content to merely dismiss Mr. Davis. They humiliated him out the door, with written evaluations that mocked his intelligence and his communication abilities, and tried to make this man who had been coaching for over 40 years sound like an incompetent.

I was able to get in touch with Mr. Davis, and he e-mailed me the following note:

“What they practice and what they convey to the community is a dishonor to the statue of Dr. John Carlos and Dr. Tommie Smith, who were advocates of human rights. Why did it take so long for the terrorism and humiliation experienced by the Black student to be reported and acted on by the San Jose State administration?”

This question is going to need to be answered. But questions about how administrators handled – or didn’t handle – the racist incident are inextricable from how a school like San Jose State could so casually disrespect its own history by treating Ron Davis so poorly. Using your history only as public relations, and not as a call to arms to build an institution anchored by principles of anti-racism, can no longer cut it.

It is no different from Cal Berkeley in 2011 boasting about its history of dissent on its website, while having students tear-gassed in the quad. The 1968 Olympic protests are not a brand. Students are saying that if you are going to be the home for this statue, you need to earn that right every day.

Dave Zirin is the author of the new book “Game Over: How Politics Has Turned the SportsWorld Upside Down” (The New Press). Receive his column every week by emailing dave@edgeofsports.com. Contact him at edgeofsports@gmail.com. These two stories first appeared in The Nation, the first on Nov. 22 and the second on Nov. 24.

Black contractors getting little if any more city contracts since new...