by the PHSS Media Committee

On the evening of April 5, hundreds gathered in downtown Oakland for the National Lawyers Guild San Francisco Bay Area Chapter’s (NLGSF) annual fundraising dinner. The Testimonial Dinner, as it’s called, increasingly brings in community members and activists involved in grassroots struggles in addition to the lawyer, legal worker and law student members of the organization. This year, the NLGSF honored California prison hunger strikers and the Prisoner Hunger Strike Solidarity (PHSS) coalition of family members, activists and friends who supported the strikers.

The assembled crowd was able to hear directly from those inside California prisons. Azadeh Zohrabi, a member of PHSS and the NLG, read a statement by hunger striker representative Antonio Guillen from the podium. His comments started “with raised fist, I demand my rights as a man and as a human being!” He joined the hunger strike because he had become “tired of the continuous abuses and horrific conditions that seem to fester in the dark corners of this world that is solitary confinement!”

The audience also heard from Marie Levin, the sister of hunger strike representative Sitawa Nantambu Jamaa (Dewberry). Sitawa defined what he called the “Jerry Brown New Crowism Doctrine” and criticized the governor for “his total disregard for all California prisoners and their families.”

Statements from Sitawa, Guillen and the other two primary hunger strike representatives were published in a journal that was distributed to all in attendance:

Arturo Castellanos wrote from Pelican Bay saying he would “only accept [the award] on behalf of all the 30,000 prisoners who participated in this latest Hunger Strike.”

Todd Ashker sent his greetings and wrote, “Your support of our cause has helped us in immeasurable ways.”

Antonio Guillen added these words of encouragement: “There is much work that still needs to be done in this protracted struggle and many of us, on both sides of the wall, are prepared to meet the challenges ahead of us. It won’t be easy and much that we wish to achieve may not come to fruition in our lifetime but, together, we will make a difference.” 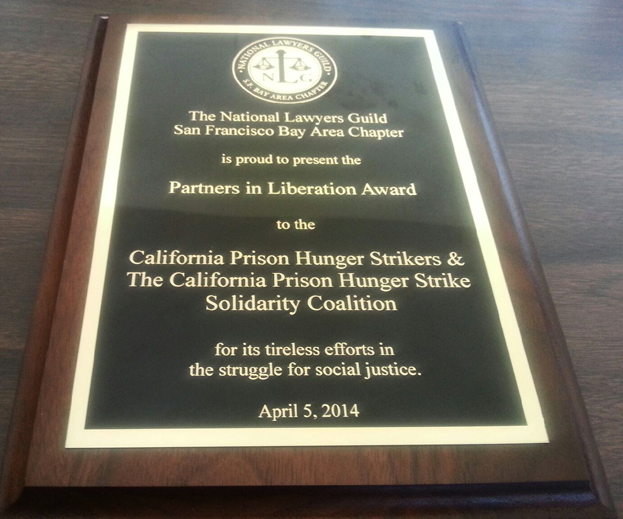 The strikers and the coalition received the Partners in Liberation Award, a good match for the honoring of NLG members Dan Siegel and Anne Weills as Champions of Justice. Dan and Anne have been particularly active in supporting the hunger strikers as both attorneys and activists.

The hope of NLG San Francisco Bay Area leadership is that the organization can live up to its side of the partnership equation – to defend those fighting for their own rights and collective justice and dignity. The chapter has rallied its members to support the demands of the hunger strikers.

It has a small but growing subset of members who have made frequent visits to the activists inside California prisons. Last August the NLGSF spearheaded an open letter to Gov. Brown calling for an end to long-term solitary confinement and urging the CDCR to meet the core demands of the activists in prison.

The National Lawyers Guild is inspired by the hunger strikers and all those who put themselves on the line for the dignity and rights of us all. We thank you for your courage and inspiration. We are honored to continue alongside the hunger strikers, their loved ones and those acting in solidarity.

Prisoner Hunger Strike Solidarity (PHSS) is a coalition based in the Bay Area made up of grassroots organizations and community members committed to amplifying the voices of and supporting the prisoners at Pelican Bay and other California prisons as they strive to win their hunger strike demands. Email prisonerhungerstrikesolidarity@gmail.com and visit http://prisonerhungerstrikesolidarity.wordpress.com/.