A petition for Strategic Release, a groundbreaking initiative to free prisoners with a record of service to their communities, will for the first time be presented to the Parole Board April 2, 2015, on behalf of Abdul Olugbala Shakur

Editor’s note: A two-sided petition form to print out, sign and circulate is posted below. Signed petitions must be returned in time to send them to the Parole Board by April 2. An online petition is also available HERE.

In recent years the New Afrikan Independence Movement (NAIM) developed the concept of “Strategic Release.” Under Strategic Release, prisoners are granted parole, pardon or clemency based on the positive impact they have had on their community and society during their imprisonment – and the even greater positive impact they will have on society as a whole if released.

Strategic Release, unlike “compassionate” or other forms of release, will have a direct impact on reducing crime – and the social inequities at the root of criminality – through the contributions and activities of those granted release. The prospective prisoner considered for Strategic Release is committed to solving the ills of society without working with the government and law-enforcement, as it is our experience success flows directly from working with the people and community.

Consideration for Strategic Release is based on prisoners’ work product and proven record of service to the community and society as a whole. As such, it is the height of social restitution, providing direct restorative justice to the people and communities wronged by their past transgressions, requiring a lifetime of commitment to society’s progress and welfare. This means Strategic Release is the highest threshold of rehabilitation and social justice any prisoner can achieve, warranting the highest award: a second chance to serve society.

It is our belief that Abdul Olugbala Shakur represents the role model for Strategic Release, not only due to his tireless commitment to improving the daily lives of those in society, but through the broad body of work he has developed and contributed to creating. We will be requesting the Board of Prison Terms issue a release date to Brotha Abdul, or in the alternative the governor grant him clemency, as we have no doubt he will have a major positive impact on society, and his body of work is the best possible proof we can offer to support this assertion.

A petition for Strategic Release

We are requesting that the Parole Board grant James Harvey (aka Abdul Olugbala Shakur) parole, or petition the governor for pardon or clemency, on grounds of strategic release. Readers are encouraged to print, sign and circulate the following two-sided petition immediately and return several days prior to Abdul Shakur’s parole hearing on Thursday, April 2, to Free Speech Society, P.O. Box 11842, Berkeley, CA 94712, or scan and email the petitions to martinot4@gmail.com. 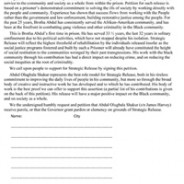 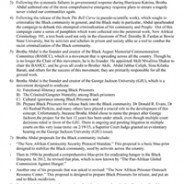 For more than 25 years, Mr. Harvey has consistently served the Afrikan-Amerikan community and has been at the forefront in combatting gang violence criminality in the Black community. His release would have a major impact positively, not only in the Black community, but in society as a whole. We’ve provided a brief list of some of his contributions in support of our request.

Brotha Abdul has no long criminal history. This is his first time in prison, and he has never been incarcerated or arrested prior to his controlling offense.

He has served 33 ½ years in prison – the last 32 years spent in solitary confinement due to his political activities and ideology and alleged membership in a prison group. But in spite of all this, Mr. Harvey has discovered his true humanity, and this is reflected in his daily contributions to the Black community and the Human Rights Movement for over 25 years.

Eligibility for Strategic Release must be demonstrated both by a proven record of positive work product on behalf of the people and society, but also by a desire for and by the community to see the subject released, which will depend on community-based parole boards. Those released as a condition of release are pledging the remainder of their lives to community and social service.

Strategic Release is the pinnacle of social restitution where the PEOPLE themselves are directly benefitting from the restorative justice. Current modes of so-called “restitution” give funds – mostly culled from the funds sent by loved ones and families of prisoners – to the state, not the victims (where there are any), and it is doled out as the state sees fit to whom and what they see fit.

Strategic Release will have a direct impact on reducing the crime in the underclass communities of Amerikka, thus starving the Prison-Industrial Slave Complex of the most vital resource it needs to function: OUR PEOPLE. When something starves, it ultimately dies.

This is why the state will fight tooth and nail to stop the concept of Strategic Release from taking root in the consciousness of the people and being transformed into a material force, and this is why we must start now pushing it on blogs, social media and every platform we can possibly access, engaging in dialogue and gaining feedback from as broad a cross-section of the population – especially the New Afrikan Community that is most affected both by victimization and offending – as humanly possible.

I believe we can tap into the anti-mass incarceration forces of society to rally around this concept and begin organizing to bring it to life.

We are suggesting that those with significant sentences or offenses will have to have at least 20 years served before they are eligible for Strategic Release. Strategic Release will also serve as a model for other prisoners to develop themselves, transform their consciousness and commit themselves to serving their communities and society.

Brotha Abdul was the original author of the historic “Agreement to End Hostilities”adopted within the CDCr and many affected communities, and he continues to work tirelessly to end racial rivalries and group conflicts.

Brotha Abdul is the author of one most effective blueprints to end Black-on-Black gang violence in U.S. society: “Operation Hip-Hop Rescue.” Following the systematic failures in governmental response during Hurricane Katrina, Brotha Abdul authored one of the most comprehensive emergency response plans to ensure that such a tragedy never visits our communities again.

Following the release of the book “The Bell Curve,” a pseudo-scientific work that sought to criminalize the Black community in general and the Black male in particular, Abdul spearheaded the campaign to debunk this attempted criminalization of his community and people. Out of this campaign came a series of pamphlets which were collected into the perennial work, “New Afrikan Criminology 101,” a textbook used not only in the classroom of Professor Dorothy B. Fardan at Bowie State University but by activists and scholars in prison and society alike as a tool to combat the racist criminalization of the Black community.

Strategic Release is the highest threshold of rehabilitation and social justice any prisoner can achieve, warranting the highest award: a second chance to serve society.

Brotha Abdul is the founder and creator of the Black August Memorial Commemoration Committee (BAMCC), which is a movement that is spreading all across the country. He appointed Akili Mwalimu Shakur to chair the BAMCC, and he gives all credit to Brother Akili, Abdul Jabbar Caliph, Sista Kilaika Baruti and others for the success of this movement.

Brotha Abdul is also the founder and creator of the George Jackson University (GJU), which is a movement designed to eradicate:

It also prepares Black prisoners for release back into the Black community.

Dr. Donald R. Evans, Dr. Ali Rashad Perkins and many others have played a crucial role in the development of this concept. Unfortunately, because Brotha Abdul chose to name the project after George Jackson,the project for the last 12 years has been under attack, even though multiple court decisions ruled in favor of the GJU. There is ongoing and pending litigation in multiple courts on this very issue, and on Feb. 19, 2015, a Superior Court judge granted an evidentiary hearing on the George Jackson University (GJU) issue.

Brotha Abdul has developed a number of very important proposals that have had an influence in the Black community, such as “The New Afrikan Community Security Protocol Mandate.” This proposal is a basic blueprint designed to stabilize the Black community; activists across the country are using this blueprint.

Then in 1996 he produced a comprehensive blueprint for eradicating hunger in the Black Diaspora. In 2012, he revised that plan, which is now known by “The Pan-Afrikan Global Commission Against Hunger.”

Another one of his proposals is “The New Afrikan Prisoner Outreach Resource Center.” This proposal is designed to prepare Black prisoners for release and put an end to Black recidivism.

Brotha Abdul is also the creator of the “Free Speech Society” (FSS) along with Mutope Duguma, Zaharibu Dorrough, Joka Heshima Jinsai and Kijana Tashiri Askari. The FSS is a movement designed to protect and defend the First Amendment rights of imprisoned and society-based activists as well. This project is currently being coordinated by Steve Martinot (martinot4@gmail.com). For more information on the FSS, visit Freespeechsociety.wordpress.com.

Brotha Abdul is the co-founder and co-creator of the “Insurrectionists Art Collective” with co-founder and co-creator Joka Heshima Jinsai (Denham), a platform for activists and art lovers to support the resolution of some of the most pressing social ills facing us as a society today, such as breast cancer prevention, treatment and research, child abuse and exploitation treatment and services, Alzheimer’s Disease research and services, domestic violence prevention and intervention services, homelessness prevention and services, child hunger prevention and services, including food security initiatives. The IAC also supports the Abdul Olugbala Shakur Literary Scholarship Fund and the Joka Heshima Jinsai Artistic Scholarship Fund, which provide literary and artistic scholarships for our youth.

Brotha Abdul has served as an active member and supporter of the National Afrikan-Amerikan Family Reunion Association (NAAFRA) with founder and CEO Dr. Donald R. Evans, a movement designed to rebuild the Black community and family while promoting entrepreneurship, Black business ownership and commerce within the Black community in order to create economic systems where residents spend their money with and within their own community, thus cultivating self-sufficiency and prosperity (NAAFRA.org).

Brotha Abdul has contributed to the expansion of New Afrikan Revolutionary Nationalism (NARN), the New Afrikan Independence Movement (NAIM) and the Republic of New Afrika (RNA) across the U.S.

Brotha Abdul has written for a number of publications, such as the San Francisco Bay View newspaper in particular (sfbayview.com), a newspaper that has provided a medium for prisoners to speak and reach the people. Abdul has served as one of its most powerful embedded activist reporters. Many of his articles have gone viral, e.g.

The piece, “What is solitary confinement?” is being used by prison rights activists all across the country to educate the public on this modern horror.

We have provided a strong case for Strategic Release. There is no doubt that Brotha Abdul’s release would have a major impact on society, not just the Black community.