New City Company presents a unique original production of “The Emperor Jones” by Eugene O’Neill starring stage and screen star Carl Lumbly (“Alias,” “The Returned,” “Cagney and Lacy” etc.) in a tour de force performance! It is a story of greed and ingenuity and restoration of natural order. It will be preceded by a short film introduction about the play’s original lead, Charles Gilpin.

The run opened July 10 at the Cyclone Warehouse, 1842 Illinois St., in Dogpatch, just a stone’s throw from Bayview Hunters Point in San Francisco. The venue is a block east of Third Street at Marin Street, the first right turn heading toward town past Islais Creek.

The play closes Sunday, Aug. 2. Performances begin at 8 p.m. on Fridays and Saturdays and 7 p.m. on Sundays, July 24-26 and July 31-Aug. 2. Tickets can be purchased at the door or at Brown Paper Tickets, http://m.bpt.me/group/1672799. Director Kim Jiang-Dubaniewicz, a Bayview resident, is offering her neighbors – all Bayview Hunters Point residents – tickets at $15, a big discount from the regular price of $25-$40.

“The Emperor Jones” is an exploration of an ill-fated opportunistic American experience as captured by the brilliant imagination of 20th century playwright Eugene O’Neill. It’s the story of a man hastily driven to greatness only to be greeted by persecution from powers still greater: conscience, karma, repentance and a debilitating past.

New City Company was started in 2012 by actor-director Kim Jiang-Dubaniewicz. The first production was “The Saroyan O’Neill Project,” which ran from January through February 2013. Kim is a graduate of The William Esper Studio in New York. She starred in the award winning PBS feature film “Tie a Yellow Ribbon” as well as the award winning “Only Child” and has appeared in numerous other film and theatre roles in New York, Los Angeles and San Francisco.

Jiang-Dubaniewicz also directed “Hello Out There!” which the San Francisco Bay Guardian said “came across beautifully.” With “The Emperor Jones,” she has another intriguing and “compelling performance” in store for all attendees.

The starring role of Brutus in “The Emperor Jones,” pioneered by Charles Sidney Gilpin, was given to Paul Robeson in 1924, early in his career. “The role terrified and galvanized Robeson, as it was practically a 90-minute soliloquy. Reviews declared him an unequivocal success,” reports Wikipedia. Robeson later played the role on stage in London. 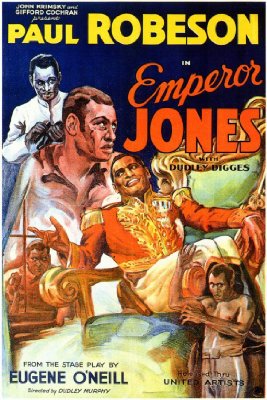 It was the adaptation of the play into a movie in 1933 that propelled Robeson to world acclaim. “Some people consider the movie to be just a vehicle for showing off Robeson’s musical talent (he sings a number of times in the film). However, the film does provide what may be Robeson’s greatest dramatic performance in a movie, considered by many to be worthy of an Oscar nomination that it did not receive.

“In the film version, the opening shots are of an African ritual dance. Some critics are quick to assess the opening as representative of the ‘primitive’ Black world to which Brutus Jones will eventually revert. However, more scholarly reviews of the film understand the complexities of the allusion to and comparison between the roots of the African-American church and the rhythmic chanting often seen in African religious practices. A quick dissolve takes us into a Baptist church in the American South, where the dancing of the congregation presents an image that argues for a continuity between the ‘savage’ Africans and the ring-shout Baptists. Such suggestive editing may be the kind of element that causes viewers to suspect the film of racism.

“Similarly, the film makes copious use of the word ‘nigger,’ as did O’Neill’s original play. African Americans criticized O’Neill’s language at the time, so its preservation and expansion in the film present another cause for critique. Given Robeson’s subsequent career as a human rights activist, the spectacle of his character using the term so frequently in regard to other Blacks seems shocking today,” according to Wikipedia.

A chain gang scene “allows the film its first opportunity to show Robeson without his shirt on, an exposure of male nudity unusual for 1933 and certainly for a Black actor. Here and later, the director plays on Robeson’s sexual power and, implicitly, on cultural stereotypes about the libidinal power of Black men.”

How does Carl Lumbly’s performance compare? Watch Paul Robeson play Emperor Jones in the film below, and go see Carl Lumbly play the role this weekend or next; six performances remain. Get your discounted tickets HERE.

Carl Lumbly is a member of Actors Equity and this is an Equity-approved project.