An African American man filed a lawsuit against his employer, Bay Bridge contractor Adams & Smith, Inc., for racial discrimination and retaliation just a little over a week after the Martin Luther King Jr. holiday. The complaint cited incidents in which a foreman lowered a hangman’s noose in front of plaintiff James H. Brown and a co-worker told him to wear the rope around his neck.

Attorney Bryan McCormack of McCormack & Erlich, a San Francisco-based employment law firm, is representing Brown. McCormack commented, “It is shocking and disturbing that more than 50 years after the passage of the Civil Rights Act, African American employees are threatened with nooses in the workplace while their employer, Adams & Smith, sits idly by.”

“Thanks to the efforts of the Civil Rights Movement, employees have legal recourse to take action against their employer to stop racist conduct from continuing into the future.”

Adams & Smith hired Brown in August 2015 to work as an ironworker on the San Francisco Bay Bridge in Oakland. Although Brown is a certified welder, he and another African American employee were assigned menial tasks such as sweeping, cleaning the jobsite and picking up garbage. Meanwhile, non-African American workers were given advanced duties and allowed to weld.

The lawsuit alleges the company failed to investigate Brown’s complaints about the racial conduct of his supervisor and co-workers. According to the claim, on Sept. 25, 2015, Brown’s Caucasian supervisor dropped a hangman’s noose next to him while he was engaged in rigging work near the Bay Bridge toll plaza. Around 20 minutes later, another co-worker told Brown to place a rope around his neck.

Brown immediately complained to the shop steward about both incidents due to their severely racist and threatening nature. He also spoke to the superintendent during the next workday. Although the superintendent informed Brown that he was aware of the problem and would resolve it, he took no action against the jobsite foreman and co-worker.

After Brown’s complaint, Adams & Smith reduced his working hours. He was sent home early on Oct. 7, 2015, and informed there was no more work for him the rest of the week. However, the non-African American workers continued to work their regular schedules.

The California Fair Employment and Housing Act prohibits employers both from practicing racial discrimination and from retaliating against employees who complain of discrimination in the workplace.

Brown alleged his hours were reduced in retaliation for complaining about the racist conduct he experienced in the workplace. He also claimed the company treated him differently than other workers who did not complain about racial discrimination.

The California Fair Employment and Housing Act prohibits employers both from practicing racial discrimination and from retaliating against employees who complain of discrimination in the workplace.

The plaintiff is seeking punitive damages as well as damages for physical and mental suffering due to his employer’s actions. He is also pursuing compensation for lost wages and benefits. 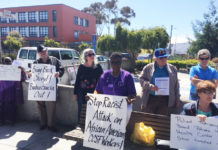