by Tiny, daughter of Dee, mama of Tiburcio

Side by side / chair frames and baby toys, / jackets, toothbrushes coffee cans and pillows / wrapped up in paper made of memories …

“These businesses around here have called the police on me 15 times just today – for just being here, in my tent. I don’t do drugs, I’m not panhandling, I am not bothering anyone. Actually, I’m the same as you; I just don’t have a roof,” said Partice X, unhoused, born and raised San Franciscan resident, who up to six months ago was housed in the Bayview before her rent was raised beyond what she could afford on her $12 per hour salary, and she now lives in a tent on 14th Street.

She was one of 85 WeSearchers collecting data on our unhoused. “In a desperate attempt to get housed, I have started another job. I am trying to save money, but it truly seems like I will never be housed in the Bay Area again,” she lamented.

Nylon homes buried under lives made of storms / these aren’t the storms of rain and thunder / sleet or hail – these rain drops include sheriff’s boots / and eviction notices.

I first met Partice when our POOR Magazine family launched our tent city WeSearch Data project in three locations in the Mission: Duboce Street, 14th Street and Trainor and all along South Van Ness. We, as poor, houseless and formerly houseless folks at POOR Magazine, launched this WeSearch (poor people-led research) because many of us live in these tents or have lived in the cardboard motels, as my mama used to call them, when we were houseless throughout my childhood, and we are tired of the lies constantly perpetrated about us without us.

“We aren’t conducting any more sweeps for the Super Bowl, not any that I am aware of,” said Sam Dodge from Mayor Ed Lee’s office (I call him Ed Lie) to multiple news sources who were inquiring about the increased Super Bowl arrests. The recent statement from the Mayor’s Office was rebuked when POOR Magazine held an emergency press conference at Duboce and Trainor streets on Thursday to release the WeSearch data. At 11 a.m. in the middle of the press conference, not one but two DPW trucks rolled up on Duboce and began seizing belongings and throwing them in their trash truck.

POOR Magazine launched this WeSearch effort because not only were so many of us unable to afford to live under a roof in San Francisco and Oakland, but because our lives, our temporary homes were being targeted for arrest, seizure and police harassment more than the usual harassment we always get living outside, in preparation for the pending plantation/corporate sports game called the Super Bowl.

This thunder is made of the sound of your home bouncing on the pavement / the lightening is a police flashlight shining on car windows / and hail filled slices of / foreclosure. – from the poem “Outside” by Tiny, Po Poets Project

“Just in the last week, DPW (Department of Public Works) has taken my belongings and thrown them in the trash over 20 times. If I leave for even an hour, everything I own will be gone,” William P explained in his WeSearch report. “What if someone came in your house and took all your stuff while you were gone. I am not living in this tent ‘cause I want to be. This isn’t fun, you know,” he concluded.

WeSearch is a concept I created as a poverty skola who has been researched and pimped multiple times for “studies” about poverty and houselessness. WeSearch is led by us, the usual “targets” of big “research grants.” i.e., the poor, disabled, indigenous, houseless, incarcerated, criminalized, institutionally schooled youth and/or ghettoized elders rather than an academic institution or a non-profiteer who only gets “involved” in researching and studying us when there is grant money, endowments being offered or a school project with a grade.

There are so many untold stories of how and why people become un-housed. Loss of a job, a partner, the onset of an illness or a crisis, but most of the time, in the Bay Area, it’s because of a greed-inspired landlord raising rent, evicting for profit so he or she can house the droves of 20-30-something wealthy, mostly white people streaming into town for the tech industry.

When I was a child with my mama, our hosuelessness was caused by another little murder of the soul as she called it, losing her job and already being fraught with the trauma of her life as a mixed race, unwanted orphan who barely made it into adulthood. She became disabled after her last job loss and was unable to work. We moved into the cardboard motels and our car when we had one and stayed there for over 10 years. Crisis like that doesn’t just go away and it certainly doesn’t go away by being arrested.

One of the many findings revealed from the WeSearch data is that over $109,000 in personal belongings were seized (read stolen) by DPW and police from 85 unhoused San Franciscans in the three San Francisco locations over 2015-16 and $62,000 from 45 unhoused Oakland residents in three outside locations. These are things that are never returned, notwithstanding the claims otherwise by DPW and the Mayor’s Office.

From jewelry to blankets, to watches, bikes and technology, once its pulled onto the recycling trucks, its gone. And then, even more tragically, when poor people’s valuables are stolen by DPW and police, it is not considered theft. Somehow just because folks are unhoused, we don’t have the right to privacy, to have mementos or anything valuable.

When me and my mama lost precious family photos, we never saw them again. Its why I now only have one picture of my mama and one baby picture of me. When me and my son were evicted from MamaHouse for a $700 rent increase, three low-income single parent families were scattered. It took several years to be re-housed safely, and none of us have truly recovered.

The other factor that’s very important is that, from San Francisco to Salinas, so-called public space under 21st century settler colonial laws, is no longer public. True, it was never really public. Since the beginning of the theft of this First Nations’ territory (Turtle Island) from Indigenous peoples and the theft of African peoples to work on it, this land has NEVER been free.

English settler laws always incarcerated people for being poor and disabled before they even landed on Turtle Island, so the colonizers brought those same laws and institutions here and perpetrated even more. But now they have become deeper and harsher. 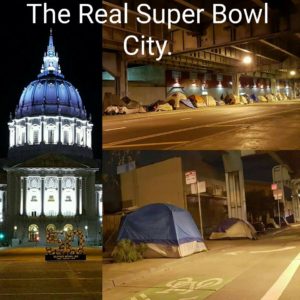 With the advent of Sit-Lie, Stop and Frisk and Business Improvement Districts, there is a constant attack on our poor bodies who end up without a roof. And as well, contrary to the perception being held in place by these anti-poor laws in the U.S., just like in global South countries, there are millions of houseless families, elders, children and single adults.

We just aren’t “allowed” to be seen, because the anti-poor laws, which are all raced and classed depending on your melanin, your age and the price of your clothes, don’t allow us to be poor and houseless in public. If you are waiting in line for a new iPhone at a Mac store or a new product at a Best Buy, you can camp, sit, put your backpack down or lie on the sidewalk or in parks for days.

In the end, the WeSearchers created three simple demands, including land to build Homefulness in San Francisco (Yelamu Ohlone Territory) modeled after the houseless peoples land liberation movement in Deep East Huchuin Ohlone land, Oakland, and the return of the $109,000 dollars lost to theft of belongings and the immediate ceasing of this insane arrest and seizure policy. The cry was simple: “Ed Lee and (Supervisor) Scott Weiner, give us land or we aren’t going anywhere.”

Angela Davis tours the nation calling for the abolition of prisons: reports from the University of Virginia and Chicago’s South Side