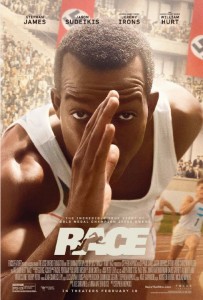 1936 is a time in world history when Hitler’s Germany and America varied only slightly in their treatment of non-Aryans. At one point in the film, after Owens earned his first gold medal, Hitler refuses to greet the winner as is customary. This déjà vu moment echoes loudly when Owens returns home and President Franklin D. Roosevelt does not acknowledge Owens, just the white Olympians at a state dinner Owens is not invited to.

However, the outstanding track and field athlete, Owens (Sept. 12, 1913 – March 31, 1980) doesn’t waste anger on white noise. There is a scene in the locker room at Ohio State University where the Black athletes are insulted by another coach who wants these students to leave the locker room so white students can shower.

“Race” (2016) is the story of Jesse Owens’ triumphant wins in the 1936 Olympic Games in Berlin just before World War II.

Snyder, Owens’s coach, shouts the man down and tells his champion that at home and abroad he will meet bigots and racists who will try to upset him and to ignore them. Snyder tells Owens to focus his attention inside where a voice lives which is his center, his ally, his coach, his conscience. We watch as the young man hears this voice speaking to him until that is the only voice audible – it is a great moment in the film.

In “Race” we witness Owens earn his greatness as he trains through rainstorms and chilly winter days. We see him drink water with lime and Coca-Cola instead of alcoholic beverages. His cigarette smoking must be a bad habit he picked up when he returned home and could no longer pursue a career in what he loved: running. Lung cancer killed him.

However, at the height of his game, we see in James’s portrayal of Owens a success through diligence and hard work. He never took his gift for granted.

Writers Joe Shrapnel and Anna Waterhouse’s “Race” is a politically astute spin on the phenomenon “white noise.” Owens’s body, at least in the film, is sacrosanct —no one touches him; his enemies just yell obscenities, so the young athlete learns to turn the sound down, then mute white supremacists’ collective voices over and over again. It is a skill Black boys today would be well-suited to notice and utilize when this lesson is applicable.

“White noise” is what Bob Moses and Ella Baker, Fannie Lou Hamer and Bayard Rustin trained volunteers to note and then ignore, so the noise would not get in the way of their work. The students who signed up to register Southern Black people to vote in places like Jesse Owens’s hometown of Oakville, Alabama, shut off “the white noise” to protest segregation in its many manifestations like inequality in education, employment and politics.

Sometimes the noise got so loud, Owens and other Black athletes expressed internal doubts, but their singular ability to pull the plug, pay the vendors, be still and focus allowed each to reach a state of certainty and peace.

The insults follow Owens from the locker room to the field, stadium, even to events where he was the guest of honor. In the beautifully shot film, we see Mr. Owens dressed in a tuxedo and his wife also elegantly dressed, yet the doorman directs the honoree to the kitchen entrance and freight elevator. Like Jackie Robinson, Owens’s life was visibly shortened by white terrorism. Systemic and structural racism kills Black people. White supremacists’ policies are antithetical to health and well-being.

When Tommie Smith and John Carlos held their fists up at another Olympic event, Mexico City, years later in 1968, I am certain they reflected on Owens whose shoulders they stood upon. While the “Heil Hitler” salute went uncensored in 1936, the “Black Power” salutes for justice and human rights for Black people were greeted with scorn by the same Olympic organization.

Actor Stephan James’ Owens is no caricature, nor are any members of the Black community in Cleveland, Ohio, where Owens returns home as often as he can. “Race” shows a Black community with dignity even when faced with discrimination. It is this dignity that stands in stark contrast to a white population which really cannot fathom what James Cleveland “JC” Owens (renamed Jesse Owens) experiences. At one point, Owens’ coach agrees that he does not know what Jesse experiences as a Black man; the coach also admits he is not a good listener. 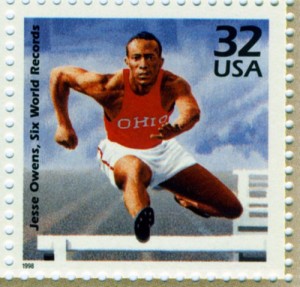 Actor Andrew Moodie as Henry Owens, Jesse’s dad, doesn’t say much, but he holds himself with quiet strength, as does his son. He tells the NAACP representative that white people would hate his son whether he returns with medals or stays home. Racism was not logical nor was a strategic boycott guaranteed to do anything for Black people at home.

His mother, Emma Owens, portrayed by Michèle Lonsdale Smith, shares some of Jesse’s early childhood illness. Amazingly, this frail, sickly child – who could still pick 100 pounds of cotton daily – grew up to be a world champion. She knows her youngest child and first to attend college is bound for greatness.

Owens is the son of a sharecropper and the grandson of slaves. Though young, he carries a legacy bigger than himself. The shackles continue to have tangible weight despite Owens’s success on a global stage. While in Berlin, segregated sleeping arrangements and eating in the cafeteria cease. However, Owens is not confused, even if others are. He is never allowed to forget his place.

“Race” is a moment in a great man’s life; however, strategies his coach uses to prepare Owens for what he will experience as a Black man on a white man’s field foreshadow what we see later in the Civil Rights Movement. Owens, who was discouraged from attending the 1936 Olympic Games by the NAACP, asked the representative if he ran.

“Race” is a moment in a great man’s life; however, strategies his coach uses to prepare Owens for what he will experience as a Black man on a white man’s field foreshadow what we see later in the Civil Rights Movement.

When the answer was no, he explained to his elder why he ran: “It is the only time I feel free,” he says. Running is freedom. On the field it doesn’t matter if one is Black or white. “It is just matters if you’re fast or slow.” When a person runs, he controls the space. “You could go in any direction, fast or slow as you wanted, fighting the wind if you felt like it, seeking out new sights just on the strength of your feet and the courage of your lungs.” Owens says he spent as little time on the ground as possible. He liked being in the air.

Many times in the film when Owens’s coach would get angry because of the treatment Jesse and other Black athletes received from other OSU coaches, players and white umpires, Jesse would tell his friend not to worry, that he would take the score, one second short, walk around to the kitchen entrance … not respond to the indignities because these people were not shouting his name. He did not answer to any of them – they did not know him. All they saw was race.

The closing of the film shows archival footage of the real Jesse Owens.

Can racism be normalized? Certainly. A human right so despicable can become the rule or the law much too easily. Note the contagions spread across multiple landscapes past and present. Legality does not necessarily equal morality, Robert H. King, Ph.D., of the Angola 3 states. And he should know, after spending 29 years in solitary confinement for his political beliefs.

“Race,” which runs 134 minutes and is rated PG-13, opened in theatres Friday, Feb. 19, 2016. I don’t know why it is rated PG-anything. Is it the racism that parents should cautiously expose their kids too?