This is a call to action against slavery in America

In one voice, rising from the cells of long term solitary confinement, echoed in the dormitories and cell blocks from Virginia to Oregon, we prisoners across the United States vow to finally end slavery in 2016. 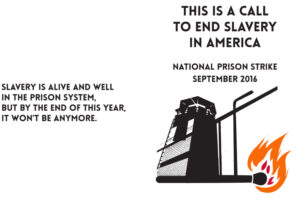 On Sept. 9 of 1971 prisoners took over and shut down Attica, New York State’s most notorious prison. On Sept. 9 of 2016, we will begin an action to shut down prisons all across this country. We will not only demand the end to prison slavery, we will end it ourselves by ceasing to be slaves.

In the 1970s the U.S. prison system was crumbling. In Walpole, San Quentin, Soledad, Angola and many other prisons, people were standing up, fighting and taking ownership of their lives and bodies back from the plantation prisons.

For the last six years we have remembered and renewed that struggle. In the interim, the prisoner population has ballooned and technologies of control and confinement have developed into the most sophisticated and repressive in world history. The prisons have become more dependent on slavery and torture to maintain their stability.

Prisoners are forced to work for little or no pay. That is slavery. The 13th Amendment to the U.S. Constitution maintains a legal exception for continued slavery in U.S. prisons. It states, “Neither slavery nor involuntary servitude, except as a punishment for crime whereof the party shall have been duly convicted, shall exist within the United States.”

Overseers watch over our every move, and if we do not perform our appointed tasks to their liking, we are punished. They may have replaced the whip with pepper spray, but many of the other torments remain: isolation, restraint positions, stripping off our clothes and investigating our bodies as though we are animals.

On Sept. 9 of 2016, we will begin an action to shut down prisons all across this country. We will not only demand the end to prison slavery, we will end it ourselves by ceasing to be slaves.

Slavery is alive and well in the prison system, but by the end of this year, it won’t be anymore. This is a call to end slavery in America.

This call goes directly to the slaves themselves. We are not making demands or requests of our captors, we are calling ourselves to action.

To every prisoner in every state and federal institution across this land, we call on you to stop being a slave, to let the crops rot in the plantation fields, to go on strike and cease reproducing the institutions of your confinement.

This is a call for a nationwide prisoner work stoppage to end prison slavery, starting on Sept. 9, 2016. They cannot run these facilities without us.

Non-violent protests, work stoppages, hunger strikes and other refusals to participate in prison routines and needs have increased in recent years. The 2010 Georgia prison strike, the massive rolling California hunger strikes, the Free Alabama Movement’s 2014 work stoppage, have gathered the most attention, but they are far from the only demonstrations of prisoner power.

Large, sometimes effective hunger strikes have broken out at Ohio State Penitentiary, at Menard Correctional in Illinois, at Red Onion in Virginia as well as many other prisons. The burgeoning resistance movement is diverse and interconnected, including immigrant detention centers, women’s prisons and juvenile facilities.

This is a call for a nationwide prisoner work stoppage to end prison slavery, starting on Sept. 9, 2016. They cannot run these facilities without us.

Prisoners all across the country regularly engage in myriad demonstrations of power on the inside. They have most often done so with convict solidarity, building coalitions across race lines and gang lines to confront the common oppressor.

Forty-five years after Attica, the waves of change are returning to America’s prisons. This September we hope to coordinate and generalize these protests, to build them into a single tidal shift that the American prison system cannot ignore or withstand. We hope to end prison slavery by making it impossible, by refusing to be slaves any longer.

To achieve this goal, we need support from people on the outside. A prison is an easy-lockdown environment, a place of control and confinement where repression is built into every stone wall and chain link, every gesture and routine.

When we stand up to these authorities, they come down on us, and the only protection we have is solidarity from the outside. Mass incarceration, whether in private or state-run facilities, is a scheme where slave catchers patrol our neighborhoods and monitor our lives. It requires mass criminalization.

Our tribulations on the inside are a tool used to control our families and communities on the outside. Certain Americans live every day under not only the threat of extra-judicial execution – as protests surrounding the deaths of Mike Brown, Tamir Rice, Sandra Bland and so many others have drawn long overdue attention to – but also under the threat of capture, of being thrown into these plantations, shackled and forced to work.

Forty-five years after Attica, the waves of change are returning to America’s prisons.

When we remove the economic motive and grease of our forced labor from the U.S. prison system, the entire structure of courts and police, of control and slave-catching must shift to accommodate us as humans, rather than slaves.

Prison impacts everyone, when we stand up and refuse on Sept. 9, 2016, we need to know our friends, families and allies on the outside will have our backs. This spring and summer will be seasons of organizing, of spreading the word, building the networks of solidarity and showing that we’re serious and what we’re capable of.

Step up, stand up and join us. Against prison slavery. For liberation of all.

Find more information, updates and organizing materials and opportunities at the following websites:

Prisoners from across the United States have released this call to action for a nationally coordinated prisoner work stoppage against prison slavery to take place on Sept. 9, 2016. Get it as a zine PDF, En Espanol or mailroom friendly. Write to SPR (Support Prisoner Resistance), P.O. Box 12769, Milwaukee WI 53212 of email prisonerresistance@gmail.com. Subscribe to updates at SupportPrisonerResistance-subscribe@lists.riseup.net.