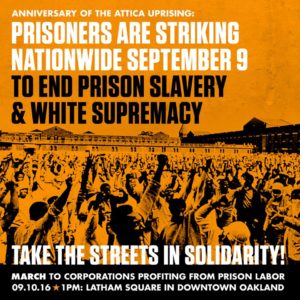 On Friday, Sept. 9, on the 45th anniversary of the Attica Uprising in New York, prisoners are calling for a general strike across all prisons in the United States against prison slavery. As the initial call out for the strike stated:

“Slavery is alive and well in the prison system, but by the end of this year, it won’t be anymore. This is a call to end slavery in America. This call goes directly to the slaves themselves. We are not making demands or requests of our captors; we are calling ourselves to action. To every prisoner in every state and federal institution across this land, we call on you to stop being a slave, to let the crops rot in the plantation fields, to go on strike and cease reproducing the institutions of your confinement. This is a call for a nationwide prisoner work stoppage to end prison slavery, starting on Sept. 9, 2016. They cannot run these facilities without us.”

This is not only a strike against bad conditions, for the changing of rules around things like parole, and to actually be paid for their labor, which makes billions for multi-national corporations, but against white supremacy itself. When the 13th Amendment was passed in 1865, it in theory banned slavery, except in the form of imprisonment. While many former slaves simply became indentured sharecroppers, over the decades following the Civil War, corporations and governments continued to look toward prisons as a major source for free and cheap labor.

“Slavery is alive and well in the prison system, but by the end of this year, it won’t be anymore. This is a call for a nationwide prisoner work stoppage to end prison slavery, starting on Sept. 9, 2016. They cannot run these facilities without us.”

As the Free Alabama Movement, one of the groups that have pushed hardest within the growing prison labor movement, wrote:

“Under the 13th Amendment, the criminal justice system and the courtroom would become the auction block. ‘Neither slavery or involuntary servitude, except as punishment for crime whereof the party shall have been duly convicted.’ Since that time, it has been the jails and prison systems that have served the functions of running the enterprise and institution of slavery in America. And the complexion of the slave has not changed: Black, Brown and poor. The practice has not changed: free labor that exploits the oppressed and enriches the rulers of the system.”

Simply stated, it is legal to work someone for free or next to free as long as they are imprisoned. In some cases, such as Angola prison in Louisiana, the facility is a remodeled slave plantation and prisoners are forced to work in the fields just as slaves did before them. As the Free Alabama Movement wrote in “Let the Crops Rot in the Fields”:

“After a period of over 40 years of an accelerated rate of incarceration, the issue of mass incarceration and prison slavery has now reached its crescendo, spurred on by factors that include racism, capitalism, free labor and a politically motivated desire to provide jobs to a valued voting block of rural, conservative white citizens by building prisons in rural and agricultural areas that had been decimated by the industrial revolution and the outsourcing of jobs to China, India, Indonesia etc.

“Then, once the prisons were built, the government manufactured a ‘war on drugs’ designed to fill those newly built prisons with Black, Brown and poor people who had been rendered unemployable by corporate downsizing and outsourcing in the early ‘70s and who were considered a strain on social programs, unwanted competitors for limited jobs and ideal candidates for corporations that needed a large labor pool for forced slave labor. Mass incarceration has now culminated in a for-profit prison industrial complex that now holds over 2.5 million men, women and children hostage for the sole and exclusive purpose of exploitation and free labor.

“The people in America’s prisons, mostly Black, Brown and White and all poor now make up a free (or penny wage) labor force for a $500 billion per year industry that is producing a range of products and providing services so broad and extensive that it touches every area of the U.S. economy.”

They go on to write:

“Just like the institution of chattel slavery, mass incarceration is in essence an economic system which uses human beings as its nuts and bolts. Therefore, our new approach must be economically based and must be focused on the factors of production – the people being forced into this slave labor.

In short, prisoners are thinking about where they can be most disruptive in order to fight against, and ultimately destroy, prison slavery. Members of the Free Alabama Movement write that while hunger strikes, protests and marches at state capitols and also phone and write-in campaigns can bring attention, they don’t show the full disruptive power of prisoners, whose labor is needed to keep entire prisons running, in the same way that labor strikes can. They write:

“The (hunger strikes in California and elsewhere) showed us all that with leadership and unity, we can defeat mass incarceration with the right strategy. But we also learned that, while we did see progress in some areas, they have a minimal impact on the system of mass incarceration.

“We have to strategize with the understanding that we are dealing with modern day slave profiteers. These businessmen will gladly let us die from starvation so long as their assembly lines keep moving. We have to ask ourselves: If we are protesting against mass incarceration and prison slavery, then why aren’t we doing it at the prisons where our economic strength can be felt?”

This disruptive power is a force that has been growing in the last several years and months, as prisoners in a variety of facilities have carried out actions and launched a variety of revolts. From the riots that have raged at Holman Prison in Alabama, ongoing hunger and work strikes that have taken place from Texas to Wisconsin to Nevada, to the support and noise made in solidarity with prison May Day strike actions, all of this activity has been building towards Sept. 9.

“These businessmen will gladly let us die from starvation so long as their assembly lines keep moving.”

Over the last several years, the Free Alabama Movement has grown into a mass movement that involves prisoners across every state in the U.S. They are currently orgnizing in Ohio, Mississippi, Virginia, Texas and many more states. Working closely with FAM have been outside organizations such as MAF (Mothers and Families) of FAM and the Incarcerated Workers Organizing Committee (IWOC), which is a committee within the Industrial Workers of the World (IWW), a revolutionary anti-capitalist labor union founded in 1905.

Currently, the Incarcerated Workers Organizing Committee has signed up close to 1,000 prisoners to become members of the IWW and, along with Anarchist Black Cross (ABC) chapters and a variety of prisoner support groups, have helped to offer support to the growing prison labor movement. This organizing and support from a variety of groups, crews, coalitions and individuals has been crucial. But our work is only just beginning.

We need to push, plan, organize and build capacity for the upcoming strike on Sept. 9 and the days that come after, as repression and lockdowns are sure to follow and, in some cases, have already begun. Sept. 9 is an opportunity for us to act in solidarity with comrades we have already been building with – both on the inside and on the outside. At the same time, it is a moment when we can take part in a historical struggle and bring people into the real nitty gritty work of attacking a pillar of white supremacy and racial apartheid.

For more information about how you can get involved in actions to support the strike, contact Oakland IWOC at IWOC-oakland@iww.org or Oakland IWOC, P.O. Box 6305, Oakland, CA 94612.