Journalist and poet Frank Marshall Davis is an important voice who channeled his social convictions through the power of the pen, and proved to be an unsung hero in the struggle for human rights.

Davis was born in Arkansas City, Kansas, on Dec. 31, 1905. Having come of age in the landscapes of the Midwest and the South, Davis experienced the brutalities of Jim Crow. At the tender age of 5, he was nearly killed by a group of older white children who reportedly attempted to replicate a lynching – as such stories were widely reported.

The senseless murder of thousands of Black Americans and the perpetual injustice that ended the lives of millions more did not just leave an impression on the young Davis and others of his generation, but left wounds unhealed like the scars still blighting American society.

Davis graduated from Arkansas City High School in 1923. Taking on part-time jobs to help pay for school, he enrolled at Friends University. From 1924-1926 he studied journalism at what is now Kansas State University (KSU) and moved to Chicago in 1927 to begin the most important phase of his education. 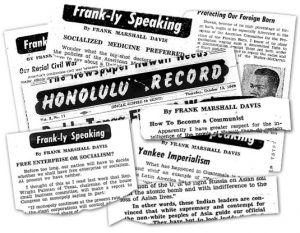 During his tenure as a reporter, he exposed graft and corruption in the Windy City and would later set his attention on the pressing issues of civil rights, labor unions, the menace of fascism in Europe and on the American homefront and the dangers of the Cold War.

“As a practicing journalist, Davis felt burdened emotionally by the weight of lynchings, discriminatory practices and other racism-induced conditions,” so writes Professor John Edgar Tidwell, an associate professor of English at the University of Kansas, in his introduction to a collection of Davis’ poetry titled “Black Moods: Collected Poems” (2002).

Davis’ articles appeared in the Chicago Whip, Chicago Evening Bulletin and the Gary (Indiana) American, along with other publications. He left Illinois for Georgia to write for the Atlanta World, subsequently returning to Chicago in 1934, where he joined the Associated Negro Press (ANP).

His reportage was eagerly devoured by those hit hardest by The Great Depression, where unemployment and poverty shook the nation that arrogantly boasted to the world of its prosperity, “where the streets are paved with gold.” During this time, the political landscape changed drastically, and more Americans embraced radical change.

“As a practicing journalist, Davis felt burdened emotionally by the weight of lynchings, discriminatory practices and other racism-induced conditions,” so writes Professor John Edgar Tidwell.

Many people came of age while confronting the reality hidden behind the myth of “The American Dream.” Thousands joined labor struggles and applied for membership in groups like the Communist Party. Davis would be one of the many Americans to join these ranks.

Over the years, Davis developed his most important outlet for his brand of journalism, social commentary and polemical screeds in his newspaper column “Frank-ly Speaking.” When Davis moved to Hawaii, he wrote for the Honolulu Record, a newspaper affiliated with the International Longshore and Warehouse Union (ILWU), from 1949-1958. According to Tidwell, it was at the Record where Davis “registered his most important political observations.” 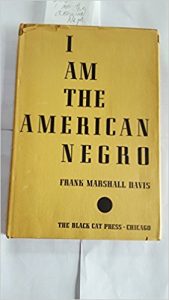 The intrepid reporter found another outlet for his social and political voice in the form of verse. Regarding his literary endeavors outside the newspaper business, he ventured into the poetic craft while attending KSU. He went on to publish “Black Man’s Verse” (1935), “I Am the American Negro” (1937) and “47th Street: Poems” (1948). Offering a wide variety of literary style and theme, his poems could take in the rhythm of jazz and the gritty slang of workers on the streets, writing love ballads to verses steeped in political consciousness.

Critics have cited influences such as the socialist poet Carl Sandburg and “Spoon River Anthology” author Edgar Lee Masters. His poetry has appeared in numerous literary volumes, such as “Black Voices: An Anthology of Afro-American Literature” (1968), where his work is published alongside literary giants W.E.B. Du Bois, James Baldwin and Langston Hughes.

As noted in the biographical sketch penned by Black Voices editor Professor Abraham Chapman, “Frank Marshall Davis established his reputation as a socially minded poet employing free-verse forms.” His work has been recognized by the National Poetry Foundation, stating on their website: “Davis concerned himself with portraying Black life, protesting racial inequalities, and promoting Black pride.”

In his posthumous autobiography, “Livin’ the Blues: Memoirs of a Black Journalist and Poet” (published in 1992 courtesy of Professor Tidwell), Davis describes the personal and political shift in application to his craft:

“My poetry was primarily a one-man protest. Until now I had been a solitary rebel, a lonely anarchist. I had joined formally with others, and that was during the days of the Chicago chapter of the League of American Writers. From this time on I resolved to join hands with others seriously interested in curing the disease of American racism. I simply could not make it as a one-man gang. 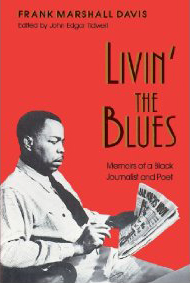 “I knew, of course, that the establishment tolerates the solitary protester. It smiles and points to him as proof that free speech does exist in America. The unwritten rule is that you can yell as loudly as you please – by yourself. But when two or more of you get together, you become a threat even though you speak only in whispers. Two or more become a conspiracy which endangers “Our Way of Life”; and those agencies, such as the FBI and the Committee on Un-American Activities, which ignore the injustices triggering your protests, now begin hounding you as dangerous radicals. I had seen this happen over and over again.”

Along with membership in the American League of Writers, Davis was involved in numerous activities supporting his passion for social justice and equality. He taught at the progressive Abraham Lincoln School, worked with the National Committee to Combat Anti-Semitism and many others. His social circle included singer Paul Robeson, “Native Son” author Richard Wright and civil rights attorney William L. Patterson. These courageous individuals influenced each other, and in turn influenced millions of their fellow citizens.

For his activism, Davis was summoned by the fascist-like House Un-American Activities Committee (HUAC) to speak, though he refused to cooperate with politicians hiding behind the authority of elected office to conduct their show-trials. Although widely condemned by historians and those committed against injustice, the “Red Scare” and the tactics of McCarthyism are being revived to silence dissent from a new generation in pursuit of the truth.

Davis saw the correlation to the racist laws and attitudes of Americans and its influence in Nazi Germany, recognizing the rhetoric of racial purity professed by uniformed Nazi leaders to that espoused by the hooded scoundrels of the Ku Klux Klan. Understanding that the real threat to global peace and justice was fascism and imperialism during World War II, Davis wrote:

“It is one of the innumerable paradoxes of this war that as fascism is being crushed abroad in Europe, it is flowering in America. As our allied soldiers give their lives for the four freedoms and to end the Hitlerian doctrine of superior peoples in other parts of the world, our own herrenvolk, in Congress and elsewhere, make strong war against the same ideals here at home.” (1944)

As fascists, white supremacists and others in the burgeoning new “America First” movement gain traction, there are those who boldly challenge their claim to power. Black Lives Matter and other movements in the fight against oppression in its many forms are taking up the call to assert their rights as human beings to share the earth and its bounties. In a newspaper article from Nov. 3, 1943, titled “Signposts to Fascism,” Davis made one of the most important statements in his long and admirable career, with words that resonate 30 years after his death:

“There is no time to be lost. None of us can afford to sit back and hope by wishful thinking to end the danger of American fascism. Nor can we all allow it to be bludgeoned abroad and grow fat here at home. And if we awaken one morning to find our native Hitlers firmly entrenched in the driver’s seat, we shall have only ourselves to blame for not suffocating the monster while we still had time.”

Mike Kuhlenbeck is a journalist and National Writers Union UAW Local 1981 AFL-CIO member based in Des Moines, Iowa. He can be reached at writermikekuhlenbeck@gmail.com. As a bonus, he sends this poem:

I HAVE FAITH
by Frank Marshall Davis

I have faith in the people
The people soil-born
Reaching hungry hands
To the white harvest
Of tall-star dreams;
I have faith
I know that some day
They shall gather these ripened dreams
The white stars
Of peace and brotherhood
And store them safely
Against the hard winter.