“Robeson may have joined the ancestors, but his example, his intelligence, his political acumen remains as a lodestar we would all do well to study – and exemplify.” –  Gerald Horne

One of author Dr. Gerald Horne’s latest volumes is “Paul Robeson: The Artist as Revolutionary.” I recently walked into the Parkdale Library in Toronto and saw a huge poster celebrating the great Robeson.

Robeson, actor, athlete, political activist and one of the greatest singers of all time, would have been 120 years old today, April 9. Thousands of words have been written about Robeson’s interpretation of Jerome Kern’s song, “Old Man River,” but little has been mentioned about his participation in a unique musical collaboration.

In 1941, Robeson joined forces with Count Basie, Richard Wright, Jimmy Rushing and John Hammond to record a song about the legendary Brown Bomber, Joe Louis. The lyrics of the song, “King Joe,” were written by Wright, the African-American novelist who wrote a book called Black Power in 1954.

Hammond, who produced Bessie Smith and Bob Dylan, directed the session. Count Basie and his orchestra provided the music, and Robeson, who was singing the blues for the first time in his life, had blues shouter Jimmy Rushing stand by his side to beat time. Mr. Five by Five, as Rushing was known, was there to keep Robeson on the ONE. 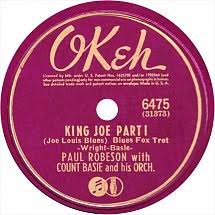 Basie, who was holding court at the Imperial Room in Toronto’s Royal York Hotel, explained how he came to work with Robeson. “We were in a club in New York City. I was talking to John Hammond, and Paul (Robeson) was in the same club dancing.

Robeson’s whole life was an item. It has been argued that Robeson, who died in Philadelphia in 1976 at the age of 77, might have been elected president of the United States if he hadn’t been of African ancestry and if he had named the United States, not the Soviet Union, as the center of world freedom.

It may sound far-fetched, but Robeson was qualified for the job at the White House. Besides possessing one of the world’s best bass voices and great athletic skill, Robeson was also a talented lawyer and debater. He had the looks of Harry Belafonte and the charisma of Steve Biko and Muhammad Ali.

For 30 years – from the First World War until after the Second World War – Robeson’s extraordinary achievements kept him in the spotlight. First, he won national fame as a football superstar – the fabulous “Robeson of Rutgers,” an all-time All-American. Robeson was the third Black to enroll at Rutgers University.

On graduation, he entered Columbia University Law School, paying his expenses by playing professional football. Realizing there was little future in those days for a Black lawyer, he made the stage and concert singing his career. He gained international renown as a concert singer and actor in starring roles on stage and screen.

But the limelight was suddenly switched off. Robeson shocked the American establishment with his advocacy for the rights of Africans in America and his praise for the Soviet Union. His constant involvement in human rights causes and left-wing movements led to his being branded a Communist.

His passport was revoked by the U.S. State Department in 1950; he didn’t get it back until 1958. But the boycott of Robeson by the American establishment went further: All doors to stage, screen, concert hall, radio, TV and recording studios were locked to him. Robeson saw his income plummet from $100,000 in 1947 to approximately $6,000 by 1952. 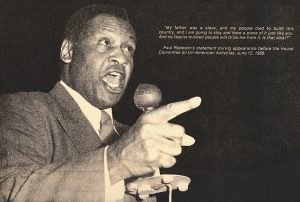 Despite the problems at home, Robeson’s star continued to shine internationally. African scholar W.E.B. DuBois, himself a victim of the anti-Communist witch hunt, said in a speech to a Harlem audience at the time: “Paul Robeson is without doubt today, as a person, the best known American on earth, to the largest number of human beings.

“His voice is known in Europe, Asia and Africa, in the West Indies and South America and in the islands of the seas. Children on the streets of Peking and Moscow, Calcutta and Jakarta greet him and send him their love. Only in his native land is he without honor and rights.”

Robeson was also known and loved in Canada. His first Toronto appearance was in November 1929. In 1942, a Toronto critic described Robeson as “the world’s greatest basso since Chaliapin.” On Sept. 25, 1944, he opened in Othello at the Royal Alexandra Theatre with Uta Hagen playing Desdemona and Jose Ferrer as Iago.

Later appearances by Robeson in Toronto were often accompanied by controversy. In a 1946 Massey Hall appearance, he spent half his time speaking about the plight of Black people and the other half singing. That July, he joined striking Chrysler workers on the picket line in Windsor. He urged them to persist until their demands were met and soothed the strikers with his bass voice.

But this was not out of character for Robeson. “The hand of brotherhood – yes, I found that hand in Canada.” Robeson wrote that tribute to Canadians in the mid-‘50s.

Robeson found brotherhood in Canada even after his death. A group of Torontonians and others endowed a whole row of 60 Roy Thomson Hall seats in his memory. Black stars Harry Belafonte, Lena Horne, James Earl Jones and British politician Anthony Benn were among the project’s sponsors.

The project was so successful that, according to Marilyn Michener of Roy Thomson Hall, “we had to go into Row P as well.” Black Theatre Canada and Third World Books and Crafts were among the organizations and people who put up $1,000 for a seat.

The late Leonard Johnston, co-owner of the Third World bookstore, explained why his seat inscription read Third World and not his family name. “Paul Robeson spoke for the oppressed people of the world, most of whom are in the Third World. I think it’s important that they honor him and not me as an individual.”