If you have children – especially ones who’ve experienced significant hardship– you may have felt like chores are a burden they could do without.

But research suggests chores are one of the few proven predictors of adult success. “Every child feels better when needed,” says Barbara Greenberg, PhD, a clinical teen and child psychologist based in Fairfield, Connecticut. Far from harming children with adverse childhood experiences (ACEs) such as abuse, neglect, or experiencing racism or poverty, Greenberg says, chores can be healing by giving traumatized children a sense of mastery and acknowledgment.

Research shows that children who do chores have fewer behavior problems, are more engaged in school, enjoy better mental health in later life and are part of a stronger family due to shared responsibility.

“Kids – like all of us – really benefit from the feeling that others depend on them,” says Bob Sege, MD, a professor of medicine at Tufts University School of Medicine who studies ACEs and resilience. “Chores may not always be fun, but the sense of being needed is so important.”

Sege advises parents not to worry that chores are too stressful for kids with ACEs. “You don’t want to coddle them,” Sege said, “because the message they will get is that they are damaged goods. They need to know that the adversity they suffered is only one part of them; it’s not all of them.” Just remember kids are bound to mess up some chores while they’re learning, he says, and you’ll be fine.

Kids with ACEs “often struggle with feelings of being devalued,” adds Sege, whose childhood chores included raking leaves, folding diapers and polishing his parents’ shoes. “Contributing to chores that others rely on allows them to build up their sense of self-worth.”

Denene Millner, author and founder of the Black parenting website mybrownbaby.com, has said her children have always helped around the house – something she feels has prepared them to better take care of themselves later on. “That’s not about being unfair to your child,” she declared in a video on Kidsinthehouse.com. “That’s about me having a child who, when she leaves my home, can go and live in her apartment, know how to cook herself a meal, and how to take care of her new home.”

Here’s how Greenberg, Millner, Sege and other experts advise involving children in chores:

Keep it light-hearted. Even toddlers can learn to put away their toys, especially if you make it into a game. Put on a song, for example, and see if you both can get all the toys in a box before the music ends. “My most important suggestion is that kids be given chores that they can succeed at, and make sure to let them know what a good job they did,” Greenberg says. “If they are struggling with a chore, don’t scold them. Sit down with the child and find out what the challenge is. Always approach this with kindness.”

Make your kindergartener a special assistant. “Kids this age love to spend time with their parents,” says Berkeley, Calif., parenting coach Rona Renner, author of “Is That Me Yelling? A Parent’s Guide to Getting Kids to Cooperate Without Losing Your Cool.” “While you’re cleaning up, give them pint-sized brooms and dustpans so they can help you … They really enjoy that.”

Remember that small kids may enjoy some chores we find pretty tiresome. That includes almost anything that involves water, such as using a water bottle to spray the table or car and wipe it. A toddler favorite: watering plants with a hose.

Keep reminders matter-of-fact. Kids may have a harder time remembering less-than-fun chores, so just nudge them (politely). “I had to keep reminding my grandson to take his plate to the kitchen when he was done,” says Renner. “It took a while, but eventually it became second nature.” Resist the urge to scold them.

Think safety. Some online chore charts suggest small kids load the dishwasher or haul out the garbage, but that could lead to an accident. Avoid giving your child a chore that is bigger than he is, Greenberg says: “With chores, like everything else, you want to set them up for success.”

Make chores an opportunity for connection. Sort laundry together, pick out old clothes to donate to a shelter, get your kids to help you make dinner. Boys, especially, are more likely to talk while helping, since they don’t feel pressured to do so.

Don’t worry if your teen makes a fuss about doing chores. Sure, teens may complain about chores and drag their feet on doing them, but according to Greenberg, they secretly want the responsibility. “With all the anxiety and self-doubt teens struggle with, chores are very anchoring,” says Greenberg, who wrote the book “Teenage as a Second Language: A Parent’s Guide to Becoming Bilingual.” “Like us, teens need to feel needed. They will protest, they’ll roll their eyes, but they like you to count on them.”

Avoid power struggles with your teen. “The way you approach things is important,” Renner says. “If you yell or go on a rant – ‘This place is such a mess! You don’t do anything to help me! I’m so sick of this!’ – you’re likely to encounter more resistance.” She suggests waiting until you calm down to have a calm talk with your teen. “You can mention the chores aren’t getting done, and that it’s time to revisit your agreement and figure out how to make it work,” she says. “The key is to hold your child accountable without it becoming a fight.”

Did you have chores as a kid, and if so, what were they? What about your kids? Feel free to email us your thoughts about chores at StressHealthNow@CenterforYouthWellness.org.

About CYW and Stress Health

This column is adapted from the monthly blog of Stress Health, an initiative of the Center for Youth Wellness (CYW), based in San Francisco’s historic Bayview district and founded by Dr. Nadine Burke Harris. Its blog covers the six areas in which research shows that parents can build resilience in their children and/or help them heal from ACEs: healthy relationships, exercise, sleep, nutrition, mindfulness and mental health. Readers can also join the Stress Health community at @StressHealthNow (Facebook) and @WeStressHealth (Twitter). We’ll be featuring monthly columns on everything from parenting with ACEs to the therapeutic value of pets. Stay tuned!

Diana Hembree is a science writer for the Center for Youth Wellness. She is an award-winning journalist who has worked at Time Inc., the Center for Investigative Reporting and the Energy Biosciences Institute and has written or edited for Forbes, HealthDay, the Washington Post, PBS Frontline, Spin, Vibe and many other places. She can be reached at stresshealthnow@centerforyouthwellness.org. 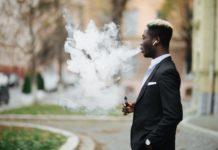 Talking with kids about the dangers of e-cigarettes