I confess. I meddled in the 2016 election. I was running the Berkeley satellite of Julian Assange’s election meddling headquarters and command post in Ecuador’s London embassy. My co-conspirator Madame Blavatsky was running another on the astral plane. She projected the “Stein-Baraka” sticker on my laptop all over the planet and sowed racial division by casting a spell on the Black NFL players who knelt, locked arms or raised fists to protest police murders of unarmed Black people. She made millions of Americans imagine they’d lost their homes to predatory lenders unleashed by Bill Clinton’s repeal of the Glass-Steagal Act and that Barack Obama had then rewarded the predatory lenders with a trillion-dollar bailout.

Madame Blavatsky helped Vladimir Putin whisper in Donald Trump’s ear at his Rust Belt rallies. Together they deceived Americans once employed by industries who now outsource all their labor to the most beaten-up, desperate corners of the world. They convinced those still living in half-dead Rust Belt cities and towns that Bill Clinton and NAFTA abandoned them there and then sent opium dealers to help them commit suicide.

Assange had yet another election-meddling satellite in Berkeley most manifest over the airwaves on Sunday nights as Twit Wit Radio on KPFA. They’ve already been apprehended and kicked off the air, but throughout the 2016 election year, they spoke ridicule to power, told half truths more or less 100 percent of the time and demanded their fair fraction of absolute power. Several Twit Wit actresses simulated Hillary Clinton’s voice with eery exactitude.

I feel compelled to confess in response to CNN’s latest looney tunes about Assange’s 2016 “election meddling headquarters and command post” with fortified computer systems, networks and individuals who might have been Russians coming and going with “deliveries.” The CNN narrative is especially un-compelling in that they had no new information to work with. None. They just tossed all the old news into a mixer, then added alarming nouns like “election meddling headquarters,” “command post” and “deliveries.”

Michael Isikoff, co-author of “Russian Roulette: The Inside Story of Putin’s War on America and the Election of Donald Trump” with David Corn, has been hard at work too. Isikoff may be running a satellite of the DNC’s 2020 election meddling headquarters and command post at Yahoo News, perhaps even in concert with CNN. His six-part “Conspiracyland“ podcast series is underway now and could well be extended through the election year to November 2020.

“Conspiracyland” is meant to establish that Russia, working with Wikileaks, infected the US body politic with the conspiracy theory that DNC black ops assassinated their own idealistic young employee, Seth Rich, for leaking the DNC email that proved they’d conspired to steal the nomination from Bernie Sanders. Or, maybe even that the Russians assassinated Seth Rich themselves, then whispered that the DNC did it, and thus damaged candidate Clinton even more than she damaged herself.

“The Russian government interfered in the 2016 presidential election in sweeping and systematic fashion. Evidence of Russian government operations began to surface in mid-2016. In June, the Democratic National Committee and its cyber response team publicly announced that Russian hackers had compromised its computer network. Releases of hacked materials – hacks that public reporting soon attributed to the Russian government – began that same month. Additional releases followed in July through the organization WikiLeaks, with further releases in October and November.”

That was Robert Mueller’s prima facie assumption; he began by asserting the fact he was tasked to prove, then failed to prove it.

This might be 110 percent silly if Harvard Law Professor Laurence Tribe, one of the first to be afflicted by Trump Derangement Syndrome (TDS), weren’t producing podcasts about the Mueller Report; if Mueller Report reading groups weren’t gathering all over the country; if Hollywood and Broadway stars hadn’t held a live read of the Mueller Report in New York City; if so many Pacifica Radio hosts hadn’t taken Mueller seriously; if presidential candidate Kamala Harris weren’t saying that the Russians are after her now; if so many more presidential candidates weren’t saying that Russia is the greatest danger to “our national security”; if NATO and Russia weren’t moving more weapons to either side of Russia’s European borders; if a new nuclear weapons race weren’t escalating; and if Julian Assange weren’t in the UK’s maximum-security Belmarsh Prison awaiting a February hearing on the US request to extradite him to stand trial for publishing classified documents in the infamously harsh Eastern District Court of Virginia.

Assange put corporate states and their armies on notice that they can no longer operate in secret. And the US, with the help of its state-corporate press, put him on notice that they’re coming to get him and that anyone else publishing classified docs could be next. 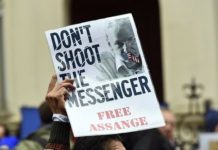