The California Legislative Black Caucus (CLBC) announced March 10 that it has introduced legislation to repeal Proposition 209. The bill is called ACA 5 or the California Act for Economic Prosperity.

“Since becoming law in 1996, Proposition 209 has cost women- and minority-owned businesses $1.1 billion each year,” said Assemblymember Shirley Weber, D-San Diego, who is chair of the CLBC.

“It has perpetuated a wage gap where women make 80 cents on every dollar made by men and has allowed discriminatory hiring and contracting processes to continue unhindered,” Weber continued.

Weber announced the bill at the California state Capitol flanked by members of the CLBC, the California Legislative Women’s Caucus, other progressive lawmakers, as well as supporters like Asian Americans Advancing Justice.

In 1996, after a heated public debate divided Californians who supported Proposition 209 and those who opposed it, voters passed the ballot initiative.

Also known as the California Civil Rights Initiative, Prop 209 outlawed the consideration of race and gender in hiring, awarding state contracts, college admissions, policymaking and even in most forms of official state documentation.

The Los Angeles Times reported that 27 percent of those who voted for 209 – well over 1.3 million voters – thought they were voting in favor of affirmative action when they marked their ballots “Yes” for the “California Civil Rights Initiative.”

But the Los Angeles Times reported that 27 percent of those who voted for 209 – well over 1.3 million voters – thought they were voting in favor of affirmative action when they marked their ballots “Yes” for the “California Civil Rights Initiative.”

My comments are in support of the repeal of Prop 209.

The 1996 passage of California State Proposition 209 eliminating affirmative action and equal opportunity for minorities and women in state contracting, state education and state employment was the most devasting and deceptive proposition in California history. In 1996 I served as the state chair of the California Business Council for Equal Opportunity, a coalition of over 80 organizations, which helped to defend affirmative action against 12 California Republican legislative bills but failed to defeat Proposition 209 itself because it was so dishonest and deceptive.

After passage of this racially disastrous ballot measure, within three years over 80 percent of the Black contractors in the state went out of business because racial discrimination was now acceptable.

After passage of this racially disastrous ballot measure, within three years over 80 percent of the Black contractors in the state went out of business because racial discrimination was now acceptable. White contractors would now do over 95 percent of state financed work and, even with federally financed projects, the participation in contracting with all minorities and women fell to as low as 3 percent, even with mandated federal goals. With Prop 209 on the books, today African Americans participate in less than 1 percent of contracting by state, county, city, town and quasi-public agencies.

During the Prop 209 campaign, many of the state political leadership came out in force against Prop 209 such as Assemblywoman Barbara Lee, Sen. Richard Polanco, Sen. Dianne Watson and others. US Sen. Dianne Feinstein, a leader in “No on Prop 209,” collaborated with the widow of Dr. Martin Luther King Jr. in the closing days of the elections to publish an opinion editorial against Prop 209 in the New York Times and the San Jose Mercury.

The voters of California did not intend to vote to pass Proposition 209, as a post-election poll by the Los Angeles Times revealed that 27 percent of the people who voted for Prop 209, the Civil Rights Initiative, thought they were voting for affirmative action. This most deceptive ballot measure never mentioned that affirmative action was being eliminated.

THIS ELIMINATION OF EQUAL OPPORTUNITY FOR MINORITIES AND WOMEN AND THE TOTAL DEMISE OF BLACK CONTRACTING IN THE STATE HAS GONE ON FAR TOO LONG. WE MUST REPEAL PROP 209!

Fred Jordan, who heads a world-renowned engineering firm and is president of the San Francisco African American Chamber of Commerce, can be reached.at SFAACC, 1485 Bayshore Blvd, San Francisco, CA 94124, 415-749-6400 or fredjordan@fejordan.com.

Journalist Tanu Henry writes for California Black Media and has previously written for BET, AOL, Dayton Daily News, the Toledo Blade and other media. He can be reached at tanu@cablackmedia.org. Bay View staff contributed to this report.

CAPTION: Assemblymember Shirley Weber, D-San Diego, announces the introduction of the California Act for Economic Prosperity or ACA 5 at a March 10 press conference in the Capitol backed by other legislators plus advocates and students representing the millions of Californians who stand to benefit from the long overdue repeal of Prop 209. Doors of opportunity will swing open that have been locked tight for nearly a quarter of a century. – Photo: California Black Media 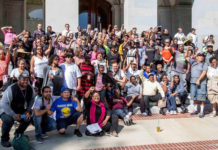