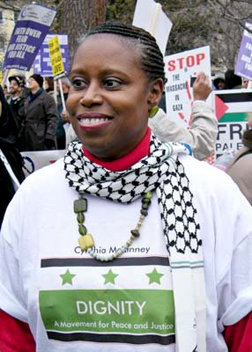 I have read and re-read President Obama’s Joint Congressional Address. All of the “acceptable punditry” have spoken and given the president glowing reviews. And so, to them and the population that still believes in them, “All is right with the world.” But for the rest of us, who refuse to swallow the pill that puts us into the Matrix, a good dose of reality is strongly called for.

But reality is not what we’re getting, not even from one of the national columnists whom I’ve met, Maureen Dowd.

I think Maureen Dowd characterized it as “Spock at the Bridge.” Now, being the Trekkie that I am, that headline grabbed my attention. I nearly gagged, however, when I got to the line supposedly from President Obama calling President Bush to proclaim, “‘I’m ending your stupid war.’ Mission relinquished.”

Why write things like this now that it is clear that the Obama administration is continuing the Bush policies for missile strikes inside Pakistan; torture; rendition for torture; public release of Bush administration e-mails; illegal wiretaps; status of prisoners at the U.S. base in Bagram, Afghanistan; and workplace immigration raids?

For the record, President Obama is also pursuing Bush policies on Iran and Israel. President Obama’s chairman of the U.S. Joint Chiefs of Staff, Admiral Mike Mullen, responded when asked whether Iran was capable of building an atom bomb, “We think they do, quite frankly.”

Dowd concludes her “Spock” piece by imbuing the president with “a Vulcan-like logic and detachment.” But I think the detachment of “acceptable” political punditry from the real world is what is totally lamentable. In the process, they render themselves irrelevant.

So, it’s clear. I’m about to step into marshy soil here, by noting that I found 19 questionable Obama policies or statements in his Joint Congressional speech delivered three days before his announcement that upon the end of the U.S. combat mission in Iraq, up to 50,000 U.S. troops could remain through 2011, after the “pullout.”

And while various “mint” operations are peddling Obama “Change” coins for purchase, complete with a certificate of authenticity, I wade further into the muck by noting that the president continues the giveaway of our hard-earned coins to an economic team intent on keeping mismanagement structures in place, serving economic ends that do not constitute the common good. I would refer readers to the many statements that I issued during the final days of our Power to the People Green Party presidential campaign about re-creating an economic system truly and finally owned by the people, operating in our interest. It is possible to do that. All it requires is enough political will.

But what forces me out into the open marshland of “non-mainstream” political punditry has to do with the latest Obama “pullout”: the decision to withdraw from the April 2009 Geneva United Nations World Conference Against Racism, dubbed Durban II.

We heard the same palaver in 2001 from the same forces inside our country, basically that a discussion of Zionism, in the context of such a conference, would be anti-Semitic; therefore all the world’s dispossessed and marginalized people must continue to suffer and sacrifice while muting their grievances so that no discussion of Israel would take place on the world stage in this context.

Well, in 2001, upon hearing this line of reasoning, I went to then-Congressional Black Caucus (CBC) Chairwoman Eddie Bernice Johnson and asked if I could be appointed as the CBC Task Force chair on Durban. The non-participation argument was also a handy “peg on the track” with the potential of derailing many conversations, including a real discussion about the trans-Atlantic Slave Trade and the issue of reparations. Respectful of the excellent preparatory work that had been done, I wanted to avoid that outcome.

Congresswoman Eddie Bernice Johnson made the appointment and I led a delegation of five members of Congress to Durban.

The current chairwoman of the Congressional Black Caucus, Barbara Lee, was a member of my delegation to Durban. From my position on the International Relations Committee, we successfully argued for U.S. participation in that conference at a hearing designed to quash our effort.

We not only met with then-United Nations High Commissioner for Human Rights Mary Robinson, we also presented her with the untold story of COINTELPRO and the remaining unsolved deaths of its Black Panther Party member victims, commissioned by me and written by Kathleen Cleaver and Paul Wolf.

Our CBC chairwoman made a beautiful statement on why it was imperative that the United States join with our Native American and Latino brothers and sisters and with oppressed peoples all over the planet and not only make our statement of solidarity, but also institute policies at the Congress that recognized their needs.

It is incorrect to say that the United States was not present at Durban. We were there and only when the duties of Congress pressed us to return to Washington, D.C., did the Bush administration make a big deal about anti-Semitism and then staged its phony walkout. The United States delegation of Congressional Black Caucus members was there to support the phenomenal work of U.S. activists and the African and Caribbean delegations, in particular. I think everyone in Durban was moved by the plight of the Dalits in India and understood better the surging political power of Afro-Latinos.

Durban was a clear victory for the world’s marginalized peoples, including those of us who reside inside the United States. But, when the Congressional Delegation returned to the U.S., there was no time for celebration because the tragedy of Sept. 11, 2001, unfolded.

What has happened in the interim has devastated the very people that Durban was designed to address, unfortunately, much of it due to U.S. policy. Now is not the time for the United States to shrink from this call.

In order to prevail in Durban, I had to go toe to toe with the Anti-Defamation League and members of Congress Tom Lantos and Ileana Ros-Lehtinen, who, among many other members of Congress, vociferously denounced Durban. This was something that I did because I felt it was the right thing to do.

Given Israel’s recent actions in Gaza that have brought upon it the world’s opprobrium, I can imagine that this is the last point in time that Israel might want to revisit Durban. Israel has said that it will not attend the conference in Geneva.

Early last year, a government official announced Canada’s decision to not attend Durban II after deeming the conference to be anti-Israel. Shortly afterwards, France followed suit with French President Nicolas Sarkozy stating that the “excesses of 2001” transformed the conference “into an intolerable platform against the State of Israel.”

I would note also that France must be particularly loath to discuss racism now with what is happening in Guadeloupe and Martinique as I write this piece. And remembering that Paris, itself, was literally on fire just a few years ago.

The UK, which has been under severe racial tests with Asians rebelling openly in the streets since Durban 2001, and the Netherlands have both threatened to withdraw their support for the conference if a “negative spiral” of events takes place. Interestingly, these remarks came at the same time as the release of a European Commission Against Racism and Intolerance report which found that the tone of Dutch political and public debate on immigrant integration, racism and other issues relevant to ethnic minorities had experienced a “dramatic deterioration.”

So, we shouldn’t be surprised that the racism stress test is revealing cracks and fissures in human relations. But the United States and President Obama should not shield them or this country from these stresses.

This conference gives us the opportunity to get the issues out in the open and to deal with them. That’s the way to put them to an end. The world might have changed because of events occurring in September 2001, but it wasn’t because the United Nations successfully convened the World Conference Against Racism.

And now that I am as completely in the middle of the marsh as I was as completely in the international waters of the Mediterranean Sea when my boat was rammed by the Israelis, let me make an observation about one aspect of marshes. I have witnessed the most beautiful sunrises and sunsets on the Savannah, Georgia, marshland. And the most beautiful rainbows. Being away from the glass and concrete can give one a better perspective.

I observed last year that I thought U.S. voters went to the polls in large numbers to try and regain a bit of dignity lost during the eight years of outright banditry played out in our names, with our resources, against our interests. But I was reminded at the recently adjourned Transpartisan Alliance convention in Colorado that dignity will not come without first an acknowledgment of the truth: With truth we can have justice; and with justice we can have peace; and it is only with peace that we can truly have dignity. Something as easy as a vote, alone, is not going to be enough to wrest us from this mess that has been wrought.

This morning, I sent the following message to the White House:

“Mr. President, it was with great disappointment that I read of your decision to pull out of Durban II. Even the Bush administration, under pressure from the Congressional Black Caucus, provided some funding for the United Nations effort and sent staff to support the Congressional delegation that attended the conference. I was there. I was head of the Congressional Black Caucus Task Force that negotiated Congressional and administration engagement on this issue. There is still time for the U.S. to participate. Your decision is not irrevocable. I would encourage you to please reconsider this decision and not only attend the conference, but also provide funding to ensure its success.”

Dignity will not come without first an acknowledgment of the truth: With truth we can have justice; and with justice we can have peace; and it is only with peace that we can truly have dignity.

I implore the members of the Congressional Black Caucus to spearhead the participation of the United States in the United Nation’s World Conference Against Racism: to boldly go where we have gone before. Dr. King reminded us that “the ultimate measure of a man is not where he stands in moments of comfort and convenience, but where he stands at times of challenge and controversy.” On this issue, President Obama has shown us his measure. I hope that the Congressional Black Caucus and the Progressive Caucus and the Democratic Caucus can show us, oh, so much more. 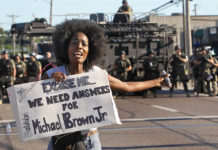